"I Walked Miles In Order to Attend Occupy Lagos"

Olutosin Oladosu AdebowaleToday's Walk was tedious, we began as early as possible and I returned this evening. I loved the Walk, because I know that I have Walked so that our children and grandchildren will not Walk the Walk........Thanks so much to our comrades, the enemies of the masses shall be put to shame!!!

A comrade was shot down at Pen cinema area/Ogba. May His soul rest in Peace.

On Friday evening, the Industrial court in Abuja declared the strike illegal and unconstitutional. The Labour Congress denied receiving any court injunction and labour told Nigerians to come out in millions.

It would come as a surprise to the Federal Government of Nigeria to wake up on 9th of January to see millions of Nigerians filling the major cities, protesting the January proclamation of the fuel subsidy removal.

The siege began at exactly 2am in Agege Area of Lagos, when comrades came out to block the roads in case some early risers were planning to leave before cock crow.

In Yaba area by 7am, several people had converged at the Nigeria Labour Congress secretariat at 29, Olajuwon Street, Yaba. There were several groups and one would wonder how they got there, considering the fact that there were no commercial vehicles on the road.

There were hundreds of uniformed men, especially the police, parading the major streets. 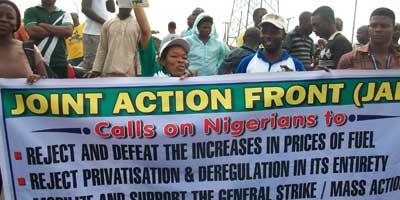 Olutosin Oladosu Adebowale - on the left - with Celine Osukwu - centre

I had walked miles in order to attend Occupy Lagos.

The protesters in Lagos, who ran to hundreds of thousands in number, moved enmasse from Yaba to mile 12 and later came back to Gani Fawehinmi Park, Ojota. Gani Fawehinmi was a Nigerian human rights lawyer that died few years ago.

The masses occupied the park as several musicians chants songs of Fela Anikulapo Kuti. Fela was a freedom fighter too.

The protest was largely peaceful but there were casualities of 'accidental discharges'. One of the casualities was one of the comrades of the Committee for the defence of human rights.

In the evening, the protesters were seen walking to their homes. There were no commercial vehicles.

The President of Nigeria, Goodluck Jonathan is yet to invite the organised labour for further discussion.

According to the spokeperson of the Joint Action Front, the strike continues tomorrow. According to him, tomorrow is for enforcement of stay at home. Nigerians are advised to cooperate and comply to the directives because the issue of subsidy removal concerns concerned Nigerians.

The protest happened simultaneously in all major cities in Nigeria except in Yenagoa city in Bayelsa, President Jonathan's home state.

In Kano, there are unconfirmed reports that seven defenceless youths were murdered by 'agents of the state' under the instruction of Governor Kwankaso.

Over seventy are said to be hospitalised, with a severe degree of casualty.