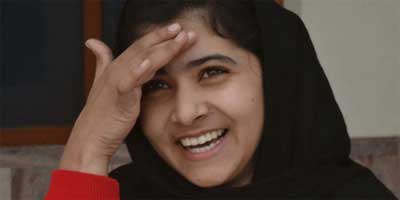 It has been almost 12 hours since I was first informed about the attack on Swat’s fearless angelic soul, Malala Yusufzai. I cannot remember how exactly I came across her the first time I did, but I do remember being so impressed with her words, her ability to speak and to challenge the violence of the Taliban at a time when few dared to do so the same, that I immediately started asking on Pashtun forums if anyone knew how I could contact her.

I still have the email I sent her and her father, an email in which I thanked her father wholeheartedly for his support for Malala and for encouraging her to pursue a path that is sure to brighten the future of Pashtun women, and congratulated him for having a daughter as brilliant-minded and as brave as Malala. My emails to both of them were very long, very much from the heart, and I confessed in them that Malala’s achievements put me, a Swati Pashtun female twice her age, put me to shame. I shared with her a poem I had recently written and reminded her that she was truly an angel, one whose presence was more than a blessing for Pashtuns at a time when oppression and tyranny were the norm of the day, a time when young children commonly set their gazes on beheaded bodies hanging by poles in Malala’s town of Mingora, a time when, as the people of Swat prepared to escape their once-beautiful Swat for other districts to protect their lives, tripping over dead human bodies lying all over the roads and streets of Swat was a common sight, as my relatives in Swat tell me when narrating to me dreadful stories and anecdotes about time during the Taliban. This was a time, they inform me, when people had to be careful about what they said even in the confines of their home because anything they said could be heard by the Taliban who were roaming their streets, knocking on the doors of anyone they suspected were harboring “criminals,” and this was indeed a time when Mullah Fazlullah, the Swat Taliban leader at the time, would victoriously and shamelessly announce how many people his men had beheaded that day and who was next. And this was a time when virtually all Swatis had left the region, many of them returning to destroyed homes and families, a time when the streets of Swat had become so quiet that no one believed it'd ever recover from its tragedies--and perhaps they were right.

What exactly happened at that time, why, and what legacy it has left remains to be told.

Seeing things from that perspective, then, we cannot deny that what Malala was doing back in 2009 was truly the most courageous thing any human in such a situation could do. In fact, she was more than courageous: she fearlessly and publicly stated that she was going to continue her education no matter where she were being educated, she showed her face—and her father stood and sat right by her side as she would talk—being fully aware of the deathly reprecussions of her intense valor. So she did not just speak against the violence of the time: she did it openly, she wrote about it, she brought it to the spotlight in Western media so that it became internationally known and not just a secret harbored by the mountains of Swat. (For more on the tragedy of Malala's shooting, why it took place, and what this means for Pashtun women, please click here.)

And then I hear that she has been shot. It’s been over 12 hours, and I am still in shock, but I think it is finally hitting me that it’s real, that she’s really seen as a threat, that those who shot her actually intended to kill her (it hurts to use this word while talking about her – may God bless her with a long, healthy, and safe life, one in which she accomplishes many, many more of her dreams, and one in which her struggles for bringing peace and justice will eventually be accepted by everyone around her regardless of their religious, political, and personal beliefs, aameen).

Fortunately, however, we can express our infinite gratitude at the attention that this tragedy has received thus far and continues to receive from all across the world. In fact, when I heard about it this morning, it was from my non-Muslim, non-Pakistani, non-Pashtun friends who called me, texted me, tweeted me, Facebooked me, and emailed me to ask me if I had heard about the attack yet. Moreover, I have just been informed that all private (non-governmental) schools in Swat are closed, since the attacked van in which Malala was riding in was a private school van. There are also headlines coming out of the Pakistani media like "The Nation Prays for Malalai"; a positively overwhelming number of people are talking about it on Twitter (with hashtags like #Malala #PrayingForMalala #MalalaiYusufzai #MalalaMustLive, and many others), Facebook, and other social media, and everyone so far has condemned the attack. At times like these, one can't help but be grateful for social media and for the global village we all share as humans who, despite our many differences, all ultimately just want peace and justice in our world, a world in which an attack on one individual among us is an attack on all of us.

But as we sit here to praise her fearless initiatives and her angelic beauty (mashaAllah), let us not forget that she is also as human as the rest of us. She therefore needs prayers, comfort, and well wishes from friends of peace and justice. I request anyone who has contact with her family, friends, or anyone else who knows her personally to please contact them, share your sympathy, and let them you are praying for her and that you condemn the attacks on her. The attack on Malala is not just an attack on Malala: it is an attack, however cowardly, on the face of humanity; on all friends of love, peace, and justice; on the potential of a stable and more peaceful future for Pashtuns; on all humans but especially women who refuse to submit to the threats and the violence to which they are subjected upon standing up against violence and injustice.

What happens now? Well, we are first going to continue praying for her recovery, and while we are waiting and praying and being hopeful, we need to do everything necessary to ensure that her attackers are caught.  If we can reach them to speak with them about the matter, we can also reach them to catch them and get justice for an innocent victim. Otherwise, we are going to continue living in fear, restless and uncertain about our safety and the safety of our children and others around us, retaining the restrictions against women and girls, such as not educating them, not allowing them to work, not allowing them to participate as equal and full members of a society shared by both women and men. Protests, mass demonstrations, petitions, more blogs, more articles, and even more awareness to ensure that enough pressure is put on Pakistani authorities to get justice--and to ensure that such attacks are reduced and eventually hopefully completely stopped.

Our Dear Malalai, you are a true champion of justice for fighting for it in a land where you know you are unsafe doing so but do it anyway! Thank you for existing! We are all praying for your recovery, and you will soon, inshaAllah, be back to us all, mesmerizing us all with your intelligence, strength, and boldness. Swat is currently in a chaotic mode in response to the injustice that has been committed against you, which tells us all that you are indeed admired, respected, and appreciated for all of your efforts. We are expecting you back with good health, your passion, and your energy.

I will end with a Qur'anic verse on justice to remind ourselves to always stand up for justice, even if it means losing people we would hate to lose in the process--and that those who have attacked her have indeed committed a wrong: "Oh you who believe, stand up firmly for justice, as witnesses to God, even if it be against yourselves, or your parents, or your kin, and whether it be against rich or poor; for God can best protect both. Do not follow any passion, lest you not be just. And if you distort or decline to do justice, verily God is well-acquainted with all that you do." (Quran 4:135)

Prayers and well wishes for Malala are requested and sincerely appreciated.