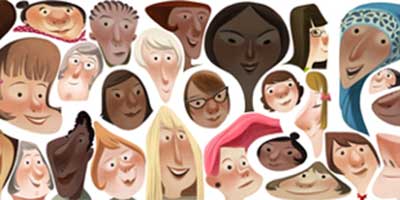 Today, International Women’s Day (IWD), is a national holiday in China, Russia, Vietnam, and Bulgaria. This should be the case in every country, considering how much every society owes its women with all the violence against women, all the discrimination, all the hatred of women that are so prevalent in so much of the world.

In fact, I cannot think of one society that is free of any form of discrimination against women, that sees its women as equal and full members of society as its men. When I say “equal” here, I am not implying that men or men’s rights are the standard against which women and women’s rights should be measured—but I am pointing out something that should be obvious to all: women and men are equal in worth, value, and merit; there is no reason either gender should be treated as a lesser member of society or as inferior to the other for any reason. But we know that most, if not all, societies still discriminate against women its own ways. Just because one society does not practice forced marriages does not mean it treats its women any better than another society might. It is a shame that in 2013, we are still fighting for women’s rights and their freedom to choose what they understand is best for themselves.

International Women’s Day is the celebration of the achievements, success, skills, and talents of half of the world’s population—the women. It is the expression of our gratitude to all those women who have sacrificed, and those who continue to sacrifice, their lives so that we their children can be granted access to resources and opportunities that most of them were denied. This day, we applaud the strength and courage of those women who struggle to survive on a daily basis, even if on the verge of hopelessness at times, because they live in a world in which every second child is living in poverty, where they struggle to provide for their families whatever in their power, in a world that refuses to acknowledge their role and significance in every society—that, indeed, without women, we would not be. Certainly, we could not be without men, either, but we have privileged men, or the status of being a man, to such an extent that the woman becomes an almost completely insignificant creature, an insignificant creation of a man’s mind that can be used only for the pleasure of man at his volition and his discretion.

Today, on International Women’s Day, we mourn the loss of those women we have lost to war, poverty, and targeted violence against women. Today, we condemn any and every society for its unfair and negative treatment of its women solely because of their sex and/or gender. Today, we raise our heads high with confidence and vow to raise our daughters and sons as equal human beings, remembering that to be different physiologically or even psychologically is not to be unequal. Today, we recognize the need to unite as women because we acknowledge that, while men also suffer in various forms especially in poverty-stricken societies, the subjugation and mistreatment of women are universal; whether it is due to men or to other women, women make the easier target violence, discrimination, and other forms of subjugation.

Let us now note some of the ways in which women misogyny manifests itself today—in 2013. If the following, listed and defined in alphabetical order, are not examples of the hatred of women, then hatred against women must not exist. We will need the International Women’s Day so long as the following gendered practices and customs continue to take place, targeting only women (except in a few cases).

In the Western world, one of the worst crimes against women is sending them the wrong message that they are ugly and worthless unless they are a size 0. While the standards for the ideal weight and body image continue to change in the society, they are unfortunately not getting better, as the idealized size continues to decrease. Today in America, the average woman is 5’4” tall and weighs 140 pounds while the average model is 5’11” tall and weighs 117 pounds. It is no surprise, then, that in the United States alone, 50% of girls between the ages of 11 and 13 see themselves as overweight and 80% of 13-year-olds have attempted to lose weight. In Britain, too, even women who are “underweight” or of “normal weight” say, according to a 2011 report, that they would like to lose weight in order to attain the “perfect body,” which many identify as Kelly Brooke and Beyonce. Plastic surgeries are a common consequence of the media’s manipulation and exploitation of women’s bodies to make them look desirable to an audience that cannot love itself unless the ideal looks and features are attained.

Body image is not just about weight, however; it also encompasses “undesirable” physical features, such as those that are the identifiable physiological traits of different ethnicities and races—slanted eyes among the Chinese, for example. Yet, in China, there is pressure on women—or so they understand it to be pressure—to “westernize” their eyes so that they can become more “appealing,” more “attractive.” Efforts to emulate the superficial Western standards of “beauty” are not exclusive to the Chinese: in South Asia, women are pressured to whiten their faces using brands like Fair & Lovely that females must use in order to be considered “beautiful” to the rest of society—and in order to succeed in their careers, as advertised on TV; notably, it is mostly mothers, sisters, female cousins, and other female family members and relatives who make women feel uncomfortable about themselves unless their faces are as white as a white piece of paper—since the whiter, the better, even if the hands, arms, and neck are a different shade. In societies that are not “white” as a race, training women to hate and otherwise insult themselves until and unless they attain the superficial mark of “beauty” called “fairness,” which itself should be an unacceptable term when used in the context of skin color, is a violation of their right to love, respect, and appreciate themselves, to recognize that success should be based not on the shade of their skin but on their skills and achievements.

A practice common primarily among Christian and Animist groups in southern Cameroon and to a lesser extent among Muslims in the southern region, breast ironing is the practice of flattening the newly-developed breasts of a young woman with highly-heated stones, pestles, spatulas, or coconut shells among other objects in order to prevent rape and other sexual assaults on women.

Also called female genital mutilation (FMG), female circumcision is the cutting off of a portion of the clitoris (how much depends on the society), usually with scissors, in order to ensure that the female does not engage in any pre-marital sexual activities. The excruciating practice leads to a number of harmful consequences, such as recurrent bladder and urinary tract infections, infertility, and an increased risk of childbirth complications and newborn deaths, among others. FGM is practiced widely in Africa, particularly in Somali, Egypt, and Mali; to a slightly lesser extent, it is also practiced in Saudi Arabia, Yemen, and Kurdish communities in the Middle East; and certain ethnic groups in Central and South America also perform FGM, according to End FGM, European Campaign.

Popular in India and China, female infanticide is what its name suggests—the killing of female infants. Female infants are murdered because male children are the preference in these societies, among other (South) Asian societies, and a woman is often considered useless until she has a son; in many societies, some women allow, if not urge, their husbands to get other wives if the couple has not borne a son yet.

Other examples of violence and discrimination against women because of their gender includes domestic violence, of which women are victims in approximately 95% of cases; forced marriages, in which admittedly men are also victimized, and while forced marriages may be a response to issues such as poverty, conflicts, and disasters, they occur are a vivid expression of the exploitation of women because of their gender and/or sex in order that the situation their families might be in may be understood as resolved; and rape, which does not always have female victims, but, at least in 2003, 9 out of 10 rape victims were females in the U.S. These are not all the crimes or forms of violence or discrimination there are against women, but they are among the most popular ones.

So why does the International Women’s Day matter, and why just "one" day? One day because if it were more, no one would take it seriously; some of the most important events and days the world occur just once a year, after all, examples of which might include birthdays, anniversaries, religious holidays or holy days, and the like. The day matters because women, even as a majority in the world, are considered a "minority” group and are discriminated against solely because they are women. Because they are constantly discriminated against in different ways in every society because they are women. Because we need to involve ourselves in collective efforts to contribute to the elimination of the above crimes against women. We need to recognize these crimes as crimes, as injustices, as completely unacceptable practices and experiences, and then work towards ending them in whatever ways we can as individuals and as communities. International Women’s Day will remain important and a necessary day of celebration for as long as these crimes remain prevalent and women are generally victims of various crimes and discrimination in different societies because of their gender and/or sex. International Women's Day matters because every society owes it to its women to celebrate this day because of the multiple crimes it has always committed against women, and that it continues to commit against women, because women are women and not men.