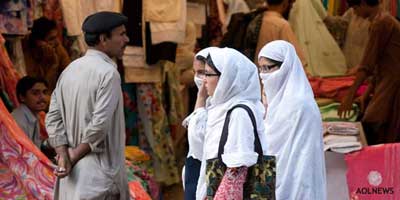 Many people erroneously believe that the parruney, a long veil traditionally worn by Pashtun women that covers the face as well as the entire body, can keep a woman from being harassed or otherwise molested. This is untrue because men continue to gawk at women, whistle at them, follow them, and even attempt to touch them despite what the women wear. In fact, the purpose of the parruney is far from that of protecting the woman: it is there solely to protect the honor of the men of the woman’s family as well as to ensure that the female is never identified by the public.

Harassment of various forms, including sexual and physical, is one of the major problems facing women today throughout Pakistan. But this problem has worsened in the past decade. When I was growing up in Swat some thirteen years ago, the way men treated women in public was generally better. When women, with the parruney wrapped around their bodies, would be walking in the street, the men would move to the side so that the women could pass; it was almost as though the street belonged to women. Men would lower their gaze, and they would stop talking if they were talking while the women were passing by. While clearly gendered, these are signs of respect according to the Pashtun culture.  The generation of the males did not matter; all seemed to be equally respectful towards women in public.

When I visited Swat two years ago, the same signs were gone. Not just the younger generation but the older generation of men, too, has lost respect for women in public spaces. Today, when men see women in the streets or in another public space, they stare as much as they want to. When women walk by a road, it is not unusual for a male driver to make several U-turns so that he can get better glimpses of the women until they are no longer visible to him. Speaking from experience, I cannot help but add that young boys under the age of ten often feel compelled to “protect” the women they are with from the gazes of the men; that even our little ones realize what is happening is revealing of the revolting attitudes towards women in public.

In turn, the women, of course, cannot stare back or respond in any other way; they must ignore, or whatever befalls her next is considered her fault. Society believes that when the woman stares back, she is “asking for it”; she is seeking attention, is enjoying the way she’s being treated, and in fact wants more of it. That shopkeepers and some bystanders once in a while stand up for the women being harassed is testimony to the level of harassment that occurs in the society.

Ironically, Pashtuns claim they respect women. Clearly, their understanding of “respect” is different, then, because women themselves do not find it respectful to be stared at, followed, groped, whistled at, and so on. A man isn’t giving a woman respect when he makes his “respect” for her contingent on how tightly the parruney is wrapped around her body or whether or not she is present in the public at all.

The parruney does not serve to protect women, contrary to common perception. It serves to ensure that the female is kept as hidden from and as unknown in the public eye as possible. Women wear the parruney particularly in areas where they or their husbands, fathers, brothers, or sons are likely to be known and through whom they can be identified as their female relatives. Not wearing the parruney, then, is an excellent tool of peghor, or taunting, from the public for a woman: if she goes out and is identified by any males, the males have the social right to taunt the women’s husbands, fathers, or any other male family members by suggesting that they “know” a female from their household. What is interesting, then, is that the parruney essentially suggests that the society cannot respect a woman unless she is hidden in the parruney. This is not respect—it is disrespect towards not just the women but also to the men, to the society as a whole. Women must not be reduced simply to what they must wear due to being identified by outsiders or due to maintaining the “honor” of the men to whom they are related.

The public does not and should not belong to any one gender. In the 21st century when women are universally contributing to improving their conditions as well as their society’s, it is no longer a benefit to the Pashtun society to keep more than half of its population—the women—hidden from the public, whether in a parruney or not.

While it is popularly claimed that the parruney is beneficial to the woman in that it protects her from the harms of society, this assumption itself points to flaws in the Pashtun society and its understanding of women and men: that Pashtuns, the Pashtun culture, cannot respect a woman unless she covered from head to toe in her parruney; it also shows that a man’s honor depends on the public decorum of the women of his household, thereby removing all sense of agency, power, and individuality from the women and essentially reducing them to property of the men of their household. Privatizing the female body as males’ property leads to certain unexpected and unwanted consequences that then become impossible to eradicate even as the need to move forward becomes more apparent.

While every woman has the right to decide for herself how she should dress and carry herself anywhere, one of the many obstacles that Pashtun women continue to face in demanding full respect from the society is the parruney. The Pashtun society insists it affords the woman respect to wear the parruney when actually it does nothing to prevent sexual, physical, or other forms of harassment, in public or otherwise. A Pashtun woman wears the parruney not to get respect, in fact, but to not be known by the public that she is the wife, mother, daughter, sister, or another female relative of the men of her household. No matter how thick or thin or long or short or simple or extravagant the parruney gets, it cannot and does not help in giving the woman any respect or protection from any kind of harassment. She has to either stay at home and never leave the house to avoid being harassed, or stand up and fight for her right to equal space in public to assert her existence and deny that she is someone’s private property—the latter option of which might not be welcomed by the society or her family initially. If Pashtun men want to respect women, they should listen to the voices of Pashtun women themselves complaining about different types of harassment in public “despite” the parruney and work to giving them respect the way the women themselves demand it.