The Difference Between Rape and Sex 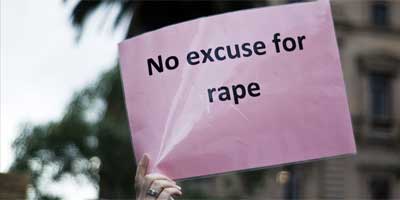 My favorite TV show for the last two years has been “Law & Order – SVU [Special Victims Unit].” Far from being perfect, this is a crime show that has taught me much about U.S. laws on various issues and about men and women, about rape, about child abuse, and about harassments—including marital rape and the difference between sex and rape. In one of my favorite episodes, Detective Elliot Stabler (character played by Christopher Meloni) is questioning a suspect in a rape case, and the suspect says "What?! I have a girlfriend. I don't need to rape anyone!” Stablers' responds with: "Rape isn't the same thing as sex." In so many other episodes, too, we get a glimpse of the conversations "she wanted it" (where the “it” refers to the assault), or "Hey, I don't need to rape anyone, okay? I have a girlfriend,” as though raping is simply having sex with someone.

So I'm writing this to talk about the difference between "rape" and "sex" and about the too disturbingly common claim of "she wanted it" or "she was asking for it" (where "it" = rape, but people constantly confuse it with sex) in response to incidents of rape.

Even if any of the above are true (e.g., they are flirting, are drunk, barely dressed, etc.), they do not want to be raped. They do not deserve to be raped. They may or may not be seeking the attacker’s attention without knowing the person will eventually attack them, but this desire does not translate to a desire for rape. They may or may not be seeking sex (which, again, does not translate to rape), but they do not hope or expect or want or seek to be abused, attacked, forced, raped, humiliated, or in any way hurt or tortured by anyone.

Clothes have nothing to do with rape. This can never be emphasized enough.  People don't get raped because they're showing skin or because they look or dress sexy. People get raped because the rapist believes he (or she - rare but not non-existent) needs to assert his/her power over the individual being or getting raped. Rape is about power, about control. It is an excellent tool of intimidation used by the attacker to control, subjugate the victim. Rape is not about the attacker’s desire to have sex. This is why someone who has easy access to sex will still rape people, sometimes even his wife, girlfriend, fiancé—or others, like children. It's also an established fact that rape is popularly and historically used as a tool of power in the military. U.S. soldiers, for example, frequently rape the women of the countries they invade, and rape in the military (also click here) is also a frequent occurrence; it assures them that they're in power. The Pakistani military, too, raped Bengali women during the Pakistan-Bangladesh war in 1971—over 200,000 women were raped, held in something called “rape camps.” Needless to say, most Pakistanis are unaware of these crimes, and Americans generally either deny the existence of rape culture in the U.S. military or are unwilling to talk about it.

Rape is also, of course, about the violation of a human body. This is why nothing can ever explain why it's okay to rape another person or why someone would deserve to be raped simply because of the way she/he behaves, dresses, talks, acts, or walks. Raping someone means doing something against their body and mind without their approval, without their consent. This is why marital rape is also acknowledged but not widely enough. Rape is rape whether a husband does it or a boyfriend or a friend or a stranger does it. When a person take someone's clothes off by force (e.g., they're not happy about what is being done), when a person enters someone else—that is rape. It is abuse. And it is not all right.

Then, of course, we know that children also get raped. And boys, too, not just girls. (Men, too, get raped.) For the same reason that little girls and boys and men get raped, women get raped. The more we justify rape by saying that the victim (in most cases, a young woman) was asking for it because she was drunk or not dressing according to society's misogynistic standards, the more we're allowing rapists to get away with raping people.

So the next time we feel like saying, "She deserved it" (rape) or "she wanted it" or "she was asking for it,” let us please pause and think about what exactly it is that we think the rape survivor wanted or asked for. Is it really ever okay to violate another human, or her/his body?

No one ever "needs" to rape anyone (except those who need to feel like they're more powerful than another human being by raping them). People with girlfriends can and do still rape people. Rape doesn't happen because the rapist is seeking sex. Rape isn't sex; rape is the violation of another human through forced sex.

The way that SVU talks about rape is something I deeply appreciate. There are always those characters, sometimes playing police officers, who will blame a rape victim for the way she was dressed or that she was drunk. There are others, also including some policemen, who find it funny when the detectives investigate the rape of prostitutes. But the detectives and the squad always make sure to remind the victims and survivors that it is not their fault, that they did not deserve to be raped; that even if they were "dressed like a slut" according to their rapist or to some people in our society, nothing gave the rapist the right to go ahead and violate or rape them; that rape is a crime no matter who does it against anyone. As Detective Olivia Benson (character played by Mariska Hargitay) says in an episode, “… the same old double standard: Guys who sleep around are studs, girls who sleep around are sluts.”

It can never be said enough that rape and sex are not the same thing, that no one “wants” to be raped, that rape can never be justified. Rape is never okay, rape is against the law, a person's dressing style does not say anything about their wanting to get raped. Rape is forced sex and the violation of another human being. Rape is just as wrong and just as bad, if not worse, as any other form of assault and abuse. Just like no one should be allowed to inappropriately touch, harass, abuse, or rape a child, one should not be allowed to do so females who are dressed in a way we find "inappropriate," or who are drunk or are flirting with the potential rapist. If they are drunk, they are unable to give consent; if they cannot give consent, no matter how much we might think "they ‘want’ to get raped,” then raping them will get the rapist imprisoned because any sexual activity for which at least one partner is unwilling or not consenting is against (American) law. It should be against all laws everywhere.

In simple terms, rape is never the rape survivor's fault; it is always, always, and always--and only--the rapist's fault.