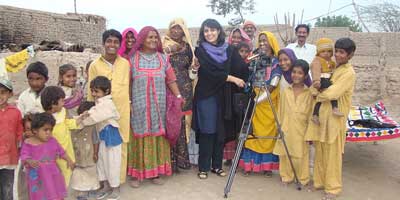 I've been meaning to write about Samar Minallah for over a year, but I think she's so important that I'm afraid of not introducing her fairly enough.

Samar Minallah filming a documentarySamar Minallah—a documentary film-maker, founder of Ethnomedia (a non-profit independent media think tank), and a human rights and women's rights activist—is one of the most influential Pashtun media personalities. The good thing is that she has received much praise and recognition for her accomplishments and her constant efforts to contribute to the condemnation of gender inequality and discrimination in our society.

Samar Minallah's family of activists and leaders hails from Sirikot, Hazara, in Pakistan's northwestern province of Khyber Pakhtunkhwa. She is the daughter of Nasrum Minallah, who was a distinguished senior civil servant from Pakistan, and Bilqees Minallah, a former member of the Pakistani National Assembly. Her sister, Fauzia Minallah, is also an important name that everyone should know about. Fauzia is a political cartoonist, a writer, and an activist.

Samar and Fauzia's brothers, too, are servicing their people and nation: Athar and Akmal. Athar is a High Court lawyer in Pakistan and was "the crusading lawyer in the nationwide anti-Musharraf lawyer’s movement." And Akmal, graduating as a medical doctor, also joined Pakistan's civil services.

Samar Minallah earned her MPhil in Anthropology and Development from the University of Cambridge. She believes in using art to promote  awareness of injustice practices that haunt Pashtun and neighboring societies. We will discuss some of these practices below. Recognizing her work, the media has dubbed Samar "The Pashtun Crusader with a Camera" and "Savior of Souls."

Accomplishments and Service to Humanity

Samar has actively fought against many evil customs that put a female's life in mental, physical, and/or social danger. These customs include Swara or Vanni, which gives in marriage a young girlof the clan or village against her will to an enemy in order to end an old rivalry; it can be compared to "blood money/price where a girl is substituted for money." Of this custom, Samar says, "Marrying a young girl to appease the enemy can be called nothing short of barbaric no matter how pretty a picture you paint."

She is best known for having brought the practice of "Swara"/"vanni" to spotlight through her 2003 documentary called "Swara: A Bridge Over Troubled Waters." This film was:

She succeeded in pressuring Pakistan's Supreme Court to pass a law in 2006 through which it will now penalize families who practice Swara and/or families who forcefully give their daughters in marriages. In short, it is illegal to force girls into marriage in Pakistan now, although whether the penalty for the crime will actually be executed or not is a different story since, as the saying goes, "old habits die hard."

Samar has successfully presented to the world and to Pashtuns themselves a positive image of Pashtun women, especially in villages. One such video is "Bibi Sheerenay -- where Honour comes from," a song sung by popular Pashto singer and musician Gulzar Alam; it outlines the typical day of an ordinary village woman from the moment she wakes up till the moment she sleeps. Samar has also picturized and directed "Allaho, a Lullaby to a Daughter,", a Pashto/Dari mix sung by another popular Pashto singer Naghma; the song highlights the importance of educating females, advising girls to "become wise, become educated, help humanity." Another music video she picturized is "Warawaee Lasoona: the Dance of Unity,", a song promoting unity and love; the poem "Tora Tyara" ("Darkness") was conceptualized by her as well, although written by Zaitoon Bano and translated by Sherzaman Taizi.

Her documentaries include "Dar Pa Dar: Where the Heart Lies," which depicts the lives and struggles of Afghan refugee women in north-west Pakistan; "Kuch Khwab Hai Meray" ("I Have a Dream"), documenting the abuse of child servants and child laborers in Pakistan, featuring the children themselves, speaking about their experiences, their mistreatment by their owners, their work; "Land of a Thousand Colors," which celebrates the cultural diversity of Pakistan; and "The Hidden Colors of Khyber Pakhtunkhwa," filmed for UNESCO in 2005 in an effort to raise awareness of the vibrant  culture of the Khyber Pakhtunkhwa province, highlighting aspects of the Pukhtun culture that contradict popular media's image of Pashtuns.

Some of Samar's documentaries can be accessed online, along with more information about her work, at ethnomedia.webs.com.

Despite the threats she has received, Samar Minallah maintains a positive outlook on life. She is bigger than the narrow understanding that her enemies have of her and her work. As she says in her interview with Newline Magazine, "The positive aspect of this experience is that one becomes strong after all the bashing. I believe I serve as a role model for my children. Speaking the truth is now a habit, and there are more rewards than there are impediments."

Samar receiving the Civic Courage Award (2010)Samar has received immense praise and several awards for her contribution to humanity; we'll share some of them. In 2007, Pukhtunwomen.org [currently not running] nominated Samar for the Perdita Huston Human Rights Award, which she won. The award was presented to her by prominent feminist and author Gloria Steinem. In 2009, she received the Roberto Rossellini Award in Italy at the Maori Film Festival. In 2010, she received the Civic Courage Award and  the Asia Foundation’s Cheng Lin Tein Fellowship. She was also the recipient of the Fern Holland Award at the 2012 Vital Voices Global Leadership Awards. The Vital Voices Global Leadership Awards honor and celebrate women leaders who are working to strengthen democracy, increase economic opportunity and protect human rights around the world."

Long live Samar Minallah! May our nation and this world continue being blessed with more Samar Minallahs, may she inspire us all to educate and raise our daughters and sons so that they, too, can spend their lives serving humanity to promote peace and justice.