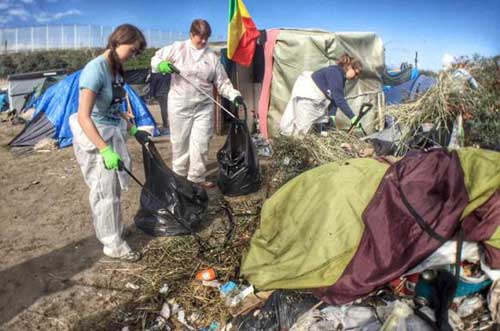 Article reproduced here with kind permission of the author

From the first day I heard about the terrible plight of the refugees in Calais (their real plight, that is, not the media myth of economic migrants desperate to come and sponge off what’s left of our benefits system) I knew I had to do something to help. I had some ideas of what would help, and discussed them with a like-minded friend. But it became apparent, from reports from volunteers at what has become known as the Calais Jungle, most of the things I had thought of were no longer needed. However, what was needed was a huge waste removal operation.

We appealed for help, and had enough volunteers to fill two seven-seater people carriers. We begged, borrowed and bought shovels, garden forks, rakes, litter pickers (lots of litter pickers), industrial quantities of anti-bacterial hand wipes, gallons of disinfectant and thousands of rubbish sacks. We turned up yesterday, along with about one hundred and fifty others, and were met by the wonderful team who had organised the entire event. We were organised into teams by Médecins du Monde who had assessed which parts of the site were most hazardous and the top priority for clearance. My daughters and I were wearing wellies and waterproof boiler suits we had bought in B&Q and another friend supplied everyone with cut-proof gloves, which we wore over protective latex gloves.

So what exactly were we clearing up? It mainly came into four categories – food waste, packaging waste, inappropriate donations and raw human sewage. Well meaning people have been turning up at the site with large amounts of western-style women’s clothing which most eastern women would find too immodest to wear, with stiletto shoes, and with children’s toys and clothes. There are, in fact relatively few women and children – a few hundred at most, with about four to five thousand men. People had donated foods like dry pasta. But the meagre fires the refugees are able to build do not heat the water for long enough to cook pasta, so packets of it had been discarded. People have also donated really useful items like thermal socks, but they have come packaged and the packaging has been discarded.

The most frequent question I was asked before I went was, “Why don’t they clean up their own rubbish?” and although I knew, from reading reports from people at the Calais Jungle, that the refugees were in no fit state to clear their own rubbish, it was hard to articulate exactly why. But it didn’t take very long on the site for the reasons to become crystal clear. I identified three reasons from my own observations.

Firstly, everyone I met was stick-thin. These people have walked hundreds of miles, with very little food, to get here. They are exhausted, sick and traumatised. Most have had to leave everything and everyone they love behind and are depressed, and sick with worry about their families.  All are facing a fearful, uncertain future which has completely demoralised them. That is the first reason.  (This, incidentally, is why many have smart phones. If you and your family had to flee at short notice and got separated, ending up in different parts of the world, what’s the one thing you would grab before you ran? I bet it would be your phone, with all their contact details in it, so you could find out where they were and indeed if they were dead or alive).

The second reason is that the French government appears to have taken a decision not to carry out waste management at the site. There is not one single waste bin anywhere to be seen – not one, between five thousand people. Some private donors have managed to rig up a few chemical toilets in cabins at one part of the site – about one for every five hundred people, and for many a very long walk from where they are staying. So imagine if you were living with five thousand people in tents and flimsy frames covered with tarpaulins, with not one waste bin between you. Where would you throw your rubbish? Imagine if you had a fifteen minute walk to a toilet you shared with five hundred others. What would you do when you were desperate? And if you had not one shovel, not one rake, not one litter picker and not one rubbish sack between you all, how much of your own waste would you clear up? There was evidence in some places of attempts to burn rubbish but most was far too wet to burn.

The third reason is that the British government, despite its austerity plans, has found nine million pounds to spend on the Calais Jungle. And on what, you may ask, has it chosen to bestow this largesse? A safe sanitation system just in time to prevent the inevitable cholera outbreak in Northern France which some successful stowaways will import into southern England? A system of waste disposal points and a fleet of waste removal lorries? Well no, actually. It has spent it on a triple-layer razor wire fence. If like me, you wondered what is the difference between barbed wire and razor wire, where barbed wire has merely spikes, razor wire has blades. So while the French government has set up insanitary conditions that make a cholera outbreak highly likely, the British government has set up the overcrowding that makes it pretty well inevitable.

Help From the Residents

We set to and began clearing the waste. My heart sank when I saw the huge mountains of it, and smelled the unbelievable stench. But I was astonished at how quickly a dozen willing, properly equipped volunteers can clear an area. It was really heartening to see the vast piles rapidly bagged up and stacked ready for the removal which, goaded into action by this day of volunteering, the local authorities had agreed to provide.

The most frequent question I heard while I was working at the site was from the refugees themselves, and it was this: please may I have some of your rubbish sacks? Inspired by our efforts, many of the residents joined in enthusiastically. One man of indeterminate age – anything from fifty upwards I would guess, of probably Syrian appearance, dressed in a thobe, the loose ankle-length garment often seen in African and Middle Eastern Muslim men and a kufi hat on his head, shod only in flip-flops, joined in tirelessly throughout the whole day. His English was limited but he communicated constantly in the universal language of a smile. My youngest daughter was struggling by herself to fill a rubbish sack using a garden fork and a litter picker. Two lads, probably younger than herself, came and gestured at her tools. When she hesitated, uncertain of their meaning, they smiled and gently relieved her of her implements, then set to with a will, filling sack after sack while she held it open for them. The reality is that, given the wherewithal, these people who feel the shame of living like this just as acutely as we would feel it, would keep their own site clean and tidy. But the governments have chosen to let them live like this, stripped not only of adequate shelter and sanitation but also of human dignity.

At times we were clearing the areas around the primitive water taps that had been erected. Regularly throughout the day, people in search of drinking water would vie with us for space on one side of the row of taps while on the other, devout Muslims performed wudu, the ritual washing that takes place before each of the five daily prayers. I was impressed by their devotion – my daughter used the word integrity – that even in this extreme situation they still kept the faith and observed their religion. I also felt a little awkward and embarrassed to be picking up litter from in front of them while they performed this duty – as though something mundane was impinging on something sacred.

At the end of the day we either threw away or thoroughly disinfected every implement we had used. We jettisoned our gloves and boiler suits. We took it in turns to stand in a bucket of disinfectant in our wellies before removing them and putting our shoes back on. We carried out the best infection control we could before bringing anything we had used back to the UK.

As I left I reflected on two things. Firstly, that if a farm was keeping animals in this condition, the RSPCA would close it down and prosecute the owners. And secondly, I was remembering an article I had read in which the author had calculated that if every single one of the residents of the Calais Jungle was allowed into Britain and given the allowance to which asylum seekers are entitled of around thirty-six pounds a week, it would cost every man, woman and child in this country fifty-seven pence a year during the short period of recovery before they found jobs and started contributing back to our economy. I believe this is a scandal. I will certainly be going back to Calais to do some more waste clearance, and I hope that between a few of us we can set up enough crowd funding to start to pay for bins and some kind of toilets.

If I had my way, I would love to invite the Foreign Secretary, the Right Hon. Philip Hammond MP to come with us on our next waste-removal trip. I would buy him a dictionary so he could occupy himself on the journey looking up the meaning of the word marauding.  In the meantime, those of us who went yesterday from our area, and a few others who are inspired by what we had to tell, will bless the Calais Jungle in word and deed, and hope to go on blessing it right out of existence, looking forward to a day when these people have a safe, clean shelter to live in and a dignified way of providing for themselves and their families.

Books by Ros Bayes on Amazon