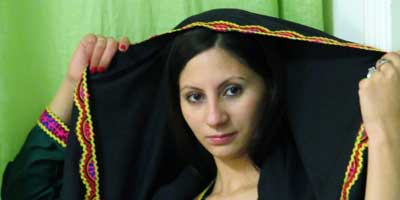 Noorjahan Akbar was born in Kabul, Afghanistan. Her parents, both educators, brought her up with a deep love and appreciation for literature and writing, and also a commitment to social activism for shaping an egalitarian and progressive Afghanistan. She learned English and basic computer skills when her family moved to Peshawar after the Taliban entered Afghanistan.

In 2001, they returned to Afghanistan and started an English language center for about 400 women in Kabul. Since then, Noorjahan has worked with several women’s rights organizations in the country and abroad.

She has lead many campaigns and protests in defense of human rights and continues to write and advocate for equality. In the summer of 2013, she published a collection of Afghan women’s writings in a book that was distributed in several provinces in Afghanistan.

Noorjahan has a BA in Sociology from Dickinson College and a Masters in Journalism and Public Affairs from American University. Currently, Noorjahan is the director of Free Women Writers, a collective of writers and students working for gender equality and social justice in Afghanistan. Noorjahan has been recognized for her efforts for gender equality at home and internationally. She was Glamour Magazine's College Women of the Year in 2013, has been named one of Forbes' 100 Most Powerful Women of the World and one of The Daily Beast's Women Who Shake the World.