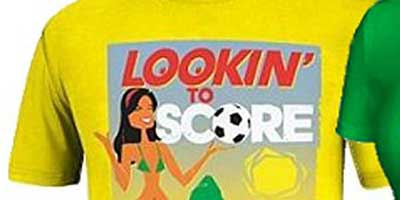 Adidas t-shirt - pulled from sale after being slammed by Brazil's tourism board and ministry of women's affairs.

Have you ever considered just what happens around a table of marketing or advertising professionals? I can only assume that either everyone is asleep or that there is some form of time machine taking us back to a place where sexism was even more blatant and more readily excepted. Of course we can also assume that the people around the table are mainly men… It takes a certain level of arrogance or perhaps some form of cognitive dissonance to give the green light to blatant sexism and use the stage of the 2014 World Cup to do so. We’re only a week in and so far we have sexism overload. Just like…

Where men are being men, watch football and hiding it from their nagging wives or girlfriends. Obviously.

Where they almost got it by including a woman playing football…but she’s wearing heels and a little dress whilst on a night out…I think that might be the sole point.

Where it is acceptable to link nagging and domestic abuse to world cup watching…well it’s funny right? Cause women nag…this never gets old. (this has now been removed, but let’s just stop and think about how it was ever allowed to be there)

Who think that women want to watch gardening programmes, wildlife documentaries and dramas about castles so couldn’t possibly understand a man’s need for sport. (I laughed a little as I typed this).

Well, given that this is about sexism, it would almost be unfair to not include the most sexist tabloid in British media (not an easy title to win). The Sun in its infinite wisdom took Page 3 out in their 2 million copy give away…apparently to cover more news. Well how about making it permanent, you know, with being a NEWSpaper and all, or perhaps it was a (very) quiet realisation that fewer people would be interested in a free copy of objectification. In the link above,  The Sun’s “how to guide” of World Cup watching includes the line “Grunt hello to the wife as she comes home and then ask her to take over barbecue duties”. Seriously.

There are few t-shirts you can buy of the World Cup which don’t objectify a woman or express general sexist commentary. This one in particular (above) has had to be pulled but… after being made… after being sold… after it being pointed out by women. Then it was pulled.

I never knew flags could be sexist. Actually that’s a lie, I did know that, everything can be made sexist, especially if patriarchy can help someone make money. You can have your very own world cup flag for the team you support. But who wants those boring regular flags which actually represent countries, how about one with boobs on it? Yours for only £15 plus postage and packaging. Buy now and we will throw in the demeaning of women for FREE!

There are so many reasons to be annoyed by it, from all quarters of life:

If you’re a woman;

Because sexism is everywhere and it’s pathetic and exhausting

Because you don’t nag

If you’re a marketing expert/work in advertising;

Because this is REALLY lazy

Because you have some responsibility of changing the status quo and the tired, outdated stereotypes it comes with

The World Cup is a world stage, it’s a shame we can’t use it to portray women positively.