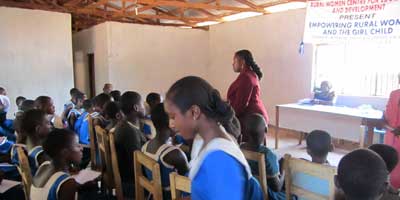 Founded in 2005, the Rural Women Center for Education and Development (RuWCED) is a not-for-profit grassroots organisation that works to promote the health, education, livelihoods, and human rights of rural women and children.

RuWCED is located in Ndop, Ngoketunjia Division of the North West Region of Cameroon, and runs field programs in other Divisions within the region.

Ndop is a poverty-stricken community with limited livelihood opportunities for rural women and girls.

We work in collaboration with community-based women’s groups, traditional councils, and schools.

We also explore and extend the relationship between resources, women’s health, and women’s human rights to promote a humanistic vision of bodily integrity and well-being.

We are primarily dedicated to advocacy, service provision, and networking.

RuWCED is an initiative of Mrs. Glory M. Nchimenyi, a rural woman who overcame a series of violations and abuses in order to earn a college degree and give back to rural communities by helping rural women and girls thrive in all aspects of life.

RuWCED responds to the needs of women, orphans, and vulnerable children through a number of services:

We also provide child sponsorships, especially to children who have lost their mothers from maternal mortality or HIV/AIDS.

As is the case with many rural communities in Africa, a series of issues adversely affects women and children in our community. We focus on the following three that are predominant in the rural communities where we work.

The majority of adolescent girls in rural Ndop and rural Boyo cannot afford sanitary pads during menstruation. This unmet need compromises menstrual hygiene, since they resort to used cloths, which can become vectors of infection. Most especially, it affects the general confidence and psyche of women, especially girls in primary education, who shy away from school during menses. In fact, some rural girls have been forced to engage into unsafe sexual relations just to meet their basic sanitary needs. As of now, there are no locally made and/or reusable menstrual napkins or pads in these communities.

In most parts of the rural communities in Ndop and Boyo, girls are still being given to marriage as early as 14 years, and to men who sometimes double or triple their ages. They tend to have no voice in negotiating for safe sex, their family sizes, or any other issues. Oppression from their already-elderly husbands and a total ignorance of reproductive health contribute to this voicelessness. Those children who do attend primary school leave without any basic knowledge about reproduction, while the culture of silence around sex and sex education at home prevents them from learning from their mothers.

In some parts of rural Boyo, matrilineal succession, a practice which the customary lawmakers of the land believe is for the good of widows and orphans, actually affects these widows and their orphans negatively. In effect, this practice and its surrounding cultural norms hinder widows and orphans in attaining their full potential, be that education, healthcare, or even economic livelihood.

In this pattern of succession, the wife and the children of a man do not have the right to inherit his property upon his death. Rather, it is his nephew, brothers, or uncles who have the right to inherit his property and assets. Women often try to be very kind and submissive to the person who will presumably succeed their husband in a bid to create a cordial relationship and secure assistance/care when their husbands die. However, in most cases, this attempt to secure assistance proves futile.

Upon the death of a man, the successors claim everything, sometimes going so far as claiming inheritance of the widow sexually. During our interviews, some women reported that nephews-in-law, with whom they lived while their husbands were alive, came requesting sexual intercourse after they lost their husbands. When the women refused, these in-laws chased them out of their late husbands’ homes. The practice is commonly called “searching your uncle’s bag.” In most of such cases, the widows succumb, while the orphans must drop out of school. Often, the girls are given to work as maids in bigger cities, go into vagabond sexual relations to help sustain their widowed mothers and siblings, or are forced into customary marriages. 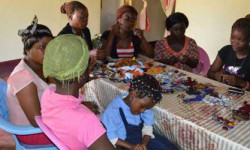