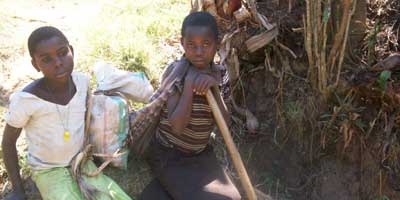 Born from rape. These children are under COFAPRI school sponsorship programme; on holiday, they go to cultivate. Photo: Bahati Valérie, August 2012

"They were having turns on me, I felt so angry, but there was nothing to do. I was bleeding inside me and I asked God why he created me woman...
When they [eventually] released me I was already pregnant"

Since the repeated fighting which began engulfing eastern Congo in the late 1990s, more than 5 million people have lost their lives innocently, and several hundreds of thousands of women were raped on daily basis.

They are either raped in their own homes or raped in their hideouts. When warfare is waged, most women seek refuge in forests or in mountains, thinking that those places are safe for them to hide.

Typically, rape was carried out by different fighters; a woman would be raped and then taken to other fighters in the bush to be raped by them too. Thus the woman became a sexual slave.

What Happens to the Children? 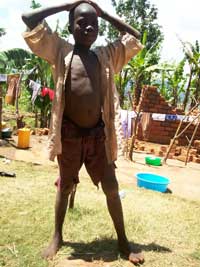 His mother was raped in the war.Some women managed to escape after the rapes, but most of them were impregnated and many had contracted Sexually Transmitted Diseases STDs, including HIV/AIDS.

In Congo, abortion is illegal, and in addition the religious beliefs of most people refuse women and girls to abort.

Though statistics on children born from these rapes are virtually nonexistent, they are counted in thousands in South Kivu alone.

Once in their villages, these women became the 'song of the village' - i.e. no man could listen to them. The stigma and shame often made them flee their homes into the unknown, sometimes with their children. Other times, the children were abandoned.

COFAPRI co-founder, Bahati Valérie, discussed this issue recently with some young COFAPRI women who were raped during the DRC cyclic wars and bore children. She collected stories from different women who live in DRC's remote villages, encouraging them to speak out.

Nantamya Bashugi is a COFAPRI member, aged 29, and mother of four children. She contracted HIV during the war, and became pregnant.

"The war started and all of us ran to the forest [where it was thought to be safer]. I had three children and they left with my mother.

There the fighters met us and they took me to their residence far in the bush. I was with my sister but she escaped and then they told me 'you will feel us today'.

They were having turns on me, I felt so angry but there was nothing to do. I was bleeding inside me and I asked God why he created me woman.

When they [finally] released me I was already pregnant and I went home.

The village laughed at me and I became a proverb in the village.

I gave birth at home in hard conditions, without any assistance.

Now this is the daughter you see here but, when I look at her, I feel more hurt than I felt at the time.

But thank you again as God sent you here; you are opening us the eyes on how to be independent and the pig you gave me has helped me a lot. God bless you.

I sold two piglets [to raise funds] and went to hospital; they told me I am sick with AIDS. I cried but I can’t kill myself. I will take my daughter next time also for a medical check."

All the children who were born from war rape are fatherless.

Because of the culture, such children are doomed to suffer a lot emotionally and materially, without help and support.

When they are abandoned by their mothers, they are especially vulnerable and prone to becoming street children, thieves and bandits. Others join militias.

COFAPRI is trying to help these children, but lack of resources means there are many more who we are unable to help.

Many women refuse to tell their children about their father, or how they came to exist. For these women, telling a child that they were born from rape is not culturally appreciable in this area.

One young woman told how her 6 year-old son who often asks her who is his biological father or his uncles.

She says she was 18 when she was raped.

The fighters found them where she was hiding in the forest with her three brothers. They took her and she was obliged to go with them in the forest where they were raping her repeatedly and in turn. Their father had already been killed and the killers looted all their property (two cows, 3 goats and 5 hens)..

Holding back the tears and looking to the ground, one hand gently touching the scars and burns on her left knee, she explained:

“ I can’t feel well to tell him [my son] about his father, because this would bring more anger and suffering again. This will make me think of the hardship I went through when I was raped and the bad conditions in which I bore this child in my womb and how he was delivered in terrible conditions without any assistance at all, except the will of God.

I do not know who impregnated me because they were many who did that to me and on several occasions.

They used to beat me and raped me daily; I felt so ridiculed and downgraded that one day I tried to escape but unfortunately they caught me again.

They wanted to kill me but instead they tortured me a lot; you can even see scars on my leg and others on my thighs and belly.

A child can’t understand how a woman like his mother was raped.

So to his questions, I divert it and we talk about something else.”

Then her tears started flowing.

Supporting Mothers in Acceptance and Bonding

Intense social discrimination in Congo against rape victims and their children makes bonding a challenge.

This might imply that the mothers readily accept the children they conceived so violently.

But for many women this acceptance comes slowly, and only with the counseling and support we give them.

Some women here were surprised to see another woman, Bahati, encouraging them not to reject their children born from rape, which the people here consider as shame and abnormal.

One of these mothers, a member of Cofapri, explained:

"We didn't like to be raped and become pregnant by rape; we cannot commit abortion because it is a sin and a crime. You may want to abort, but you die; then who will be to blame? So we think it is better to keep our babies until we give birth.

If we decide to abort; it is risky and it may become another crime. In this way, we and the rapists will have become rapists.

These women also believe that it would be a sin to kill themselves because they have been raped.

They need to be educated in order to feel not neglected, so they don't go astray. They can learn positive thinking and constructive values that are necessary for their future and the future of the country.

COFAPRI is helping four of these children at the moment, but the means we have are miminal.

These children need school materials, uniforms, shoes, food, etc as they come from destitute families. The pigs we are giving to different groups in the remote villages of South Kivu are helping the families of these children to generate income, and we teach income-genearating skills to the mothers.

Empowerment Through Information and Skills

The mothers’ needs are different to those of their children. The mothers need a kind of education that can help them to learn the skills needed for income generating activities like sewing, running small business, rearing animals like goats, pigs, rabbits, cows, knitting, baking, molding bricks, etc.

We also teach the women and men that HIV/AIDS is a very real disease, which can be passed on.

Whereas local traditional witchdoctors teach that HIV is a myth.

Overall, Bahati has successfully motivated COFAPRI members to leave behind outdated beliefs, and to believe in education. And when sick, to go to hospital.

"From the villages to Bukavu, where the hospitals are, is a long distance and expensive, but it is also essential. This is why you have been given some pigs to help you raise income for such issues.

Here, you also have healthcare centers that can help in the case of emergencies.

You have also to know that AIDS exists; it is not a myth but a reality. It fears no one, you, me and him can contract it if we are not careful.

We have to fight the stigma that hinders us to speak out about what happens to us.

We must be open and tell everything so that those who can help are able to do so.

Women can get AIDS if they have been raped in the home or during the war. This is why you have to be HIV tested in advance.

These children born of rape need more assistance in education.

Since their psychological status has been hurt, much should be done to help them otherwise they will become a social threat when they grow up."