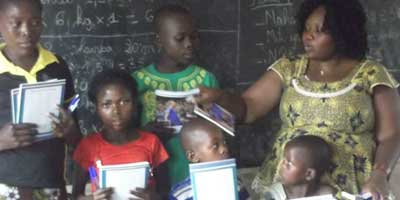 The DR Congo has been experiencing cyclic wars since 1996. During these wars, women and girls have been massively and repeatedly raped.

Several statistics show that more than 1,100 women are raped every day in the Democratic Republic of Congo (DRC), with more than 400,000 women and girls between the ages of 15 to 49 raped in the war-ravaged country in central Africa during a 12-month period in 2006 and 2007.

A new study, based on examination of government-collected and nationally representative data from the DRC, shows that levels of rape and sexual violence against women in the country are 26 times higher than official United Nations estimates. The study, spearheaded by The Center for Health Services and Outcomes Research, Graduate Program in Public Health, Stony Brook University School of Medicine, is published in the American Journal of Public Health.

Tia M. Palermo, Ph.D., Assistant Professor of Preventive Medicine, Graduate Program in Public Health, and colleagues, found in their analysis that more than 400,000 women ages 15 to 49 in the DRC had experienced rape in a 12-month period in 2006 and 2007.

In addition, Human Rights Watch reported that sexual violence in 2009 doubled in comparison with 2008.

If this assessment is accurate, then the current prevalence of sexual violence is likely to be even higher than these estimates suggest.

'We have no words to express our broken hearts.'

This appalling situation has very much affected the women and the girls physically, morally, and spiritually.

They are shocked as they are raped by known or unknown people, sometimes gang raped, raped on several occasions, and in various locations, held as sex slaves by fighters and sometimes raped in the eyes of family members or friends.

‘We have no words to express our broken hearts.

We feel very much hurt and wounded in our bodies, in our souls and in our morality. We have been ridiculed in all senses.

People around us have also been hurt as we were ridiculed in their eyes. But we have to understand this is not the end; we can still do something as we are alive. Wounds heal though scars remain.

The people who chose to do this to us and our daughters are worse than beasts; they did not know what they had been doing.

This is what explains this world’s madness.’

Discrimination Against Children Born of Rape

Some of the women and girls got unwanted pregnancies and delivered fatherless children.

This is truly shocking, terrifying. and heartbreaking for the victims and families. Children born to these raped mothers have no support at all; they are abandoned to their fate, discriminated against and labeled unwanted simply because they were born in a ‘shameful context’.

These children did not want to be born this way so they should not be blamed for it, but rather be protected.

‘Now as you can see we have children whose fathers we did not choose or want, but we could not abort as this is a sin. We accepted to become the shame of ourselves and shame of our families.

This hurt us a lot and when we look at these children who have no support at all. We shed tears and our hearts break again and we remember the painful past. If these children who are still very young can be supported, we can feel at least relieved.

You know how much it hurts to be suffering with the offspring?’

Further Stima and Trauma from HIV/AIDS and Poverty 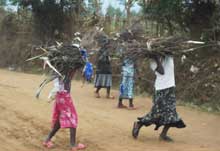 Girls are especially vulnerable when walking long distances carrying out daily chores.This situation has affected both the mothers and the children, hence they need moral, psychological and material support in order to recover their dignity and reintegrate into society.

Others were raped and infected with HIV/AIDS; this has traumatized them and has developed stigma, dishonor, and social shame in them.

Being raped, the women become rejected by their families and so they become more affected morally.

These rural women are poor, discriminated together with their children and now live with HIV/AIDS. This situation has not only destroyed family and community structures capable to satisfy the population’s needs, but also the feeling of confidence and solidarity necessary for protecting such individuals who are now totally vulnerable.

Due to this situation, many women and their children live today in an indescribable, awful, and shocking situation of trauma and poverty.

‘Our mothers and us have been put in the same basket. Many women have been raped here in the eyes of their relatives and friends around.

Some of them have children now and others have got ‘sina dawa’ [or, 'I have no medicine'. This is how people call AIDS here; for them, it has no medicine].

You are moving but already dead. This kills us more.’

In order to intervene in this situation of lack of a family context for supporting women and children victims of rape and domestic violence, COFAPRI has been organising regular visits to these women and their children in the villages where they live in order to exchange opinions with them, being aware of their problems and talking with them in order to find appropriate solutions to identified problems.

‘We like the visits you pay to us as we feel at least there are people here outside who think and care about us. We can feel we are not alone; your presence among us means a lot to us.

When we tell you our stories of domestic violence, rape and discrimination we feel our hearts become light. Yes, we like what you are doing here.’

In addition, we often organise visits of follow-up of attendance and children’s performance at school, and keep up a permanent dialogue with the women and children in the village in order to provide them with pieces of moral advice adapted to the situation in which they are.

We provide psychological support in connection with their age, sex, and the kind of violence the person has suffered; either war rape or domestic violence.

COFAPRI has always organised advocacy activities near local authorities in favour of the well-being of the women and victims of any kind of violence.

It has also encouraged women and their children to be active, to open up and speak out against the suffering they undergo either in the home or in society as this can truly help to break the cycle of violence.

'The visits you make in these mountains are risky and costly for you, we are aware of that and this is why we do appreciate your courage and good heart to help us.

You go through different villages to meet us here to bring us messages of peace, unity and positive thinking because these will help us and our children to make a new life.

Today we see a lot of changes since you have been coming here; we see your good behavior and good acts to promote us.’

Moving On - Dignity and Self-Respect Through Life Skills 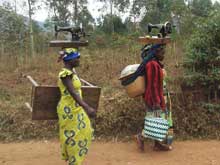 This can help them recover their dignity, respect, and honour while striving for life and forget about the painful past.

Achieving this will give pride to all of us – the victims as well as the people fighting on these victims’ sides.

Helping the children go to school and involving their mothers in some income-generating activities as well as providing them with moral support are some ways we are going.

We ask anyone of good will to join us in this hard and long-lasting task for the welfare of these women and children.

UN and Stony Brook U. School of Medicine