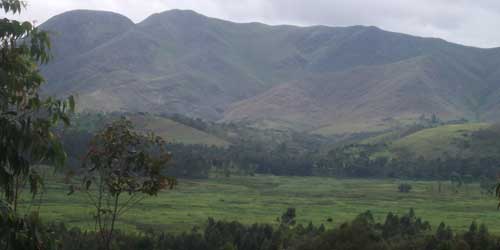 Rising from Hell to Earth: The Story of a Rape Survivor in Rural DR Congo

She was coming from the swamp to cultivate when we met for a talk, as had been arranged the previous day. Brown, beautiful, and wearing a scarf on her head, this tall village woman seated herself before me, on the ground.

She shed tears and wiped them, while looking down. This is common to women in rural areas here, who are taught at an early age not to look people in the eyes. In a tiny voice incapable of hiding her pain, she willingly shared her emotional story.

Respecting her wishes not to have her name revealed, I shall be calling her Krik (a pseudonym).

Krik has three children; two sons and a daughter. It is only her daughter who attends school, as she is the oldest, and the conditions are harsh.

This is what she says:

“I can see you are a mature person and no need to hide my life from you. My life was reduced to nothing when they killed my husband. I lost him and also lost all the property we had. Ahaaaa, I am totally desperate. You are a woman, like me, nothing to hide from you. But if you will write this, please do not mention my name. Now, this is what I have been going through."

She sighs and keeps silence for a moment, tears shed out of her eyes and she wipes them.

"That’s it. It happened to me and I was reduced to nothing in the eyes of my little brothers. I thought it was a dream. I could not believe it. That day, they took me in the eyes of my brothers. They started to enter me one by one and I was badly hurt, but shut my heart. As they finished, they left the hut. The following day, neighbours had spread the news and my husband’s family got the news as well. They came to my hut and told me to leave their hut. I tried to explain them what had happened but they were extremely mischievous; they could not listen to me at all. The day had changed into night that day.

My little head boiled and boiled. They took everything, hoes, pots, goats, mortars, pans, and others. I am as you see me here, I have nothing at all. That is my life. This has pushed me to do what you asked me [to share my story]

I hear you are helping other women around here, in these villages. Can’t you help me too, my sister?”

I have seen and heard a lot from raped women in this area, but Krik’s story broke my heart. Her husband was killed, then she was raped, expelled from her husband’s family, and all of her property taken by his relatives – “she remains as she was born”, as people say here.

She eventually became a prostitute in order to feed her children. I asked if she is sure she has not been infected with HIV/AIDS. Her response was, “to have it or not, I cannot know, but I want my children to grow.” This is an enormous issue in the rural areas. A majority of the women who have been raped think like Krik has, and they have no knowledge about safe sex.

Krik told me there are many women who live this way, but their stories remain unknown because they do not speak about it, as she has done. This is just one of the important reasons to meet these women in their villages. I encouraged her never to hide the ordeals she goes through, because this can help us to help them morally, and even materially when we are able.

She revealed that although she is involved in such a way of life, she does not like it. She says this makes her look like someone who is living in hell, while walking on earth. Admitting there are many negative effects that arise from such a life, she revealed that she feels like leaving it because she feels remorse and guilt. But again, says,

“When I look at my kids who have no father and no property, I wonder who will help them. You can now understand my dilemma.”

For Krik, she is living in hell, though we see her on earth. She wants to leave hell and come to earth. She repeatedly told me that dying would be better than living the life she is in. On hearing this, I asked her if she could willingly join COFAPRI and she hurriedly responded, “yes”. She sighed and said, “Big thank you”.

“This pulls me from hell to earth”, she added.

I promised her that we will take charge of the school education of her daughter. Sadly we are not able to help with the education of the younger brothers, as we have many other children we are helping.

“Being in touch with people like you is something very important.”, she told me. She added that the courage that is making me meet them in their villages is their luck, because otherwise they do not have anyone to confide in. As I was carefully listening to her and asking her some questions, she became more and more interested.

“For this, I thank you a lot as I have learned a lot from you”, she added.

A plea from Krik to the world

“Hello all of you there!

I gave permission to Bahati to write my story, without my real name. I have three children, one of them, the girl, is going to school. The other two stay home, like majority of children in these villages, because I have no money to pay for school. As you see me here, I have nothing at all, nothing [she sighs and keeps silence for a while].

You see [sighs and cries]. Ok. All was confiscated by my late husband’s family. What I am doing is risky and bad in the eyes of God and if my children discover it, they can hate me. I know this might affect them, and even myself, indirectly, but I have no choice.

This has stained the name of my family and my parents – but I need something to eat, buy clothes, and other items. COFAPRI has met me here and I shared my terrible story with Bahati.

I am begging you people of good will over there around the world to help me and others like me, to stay stable with my children and give up this rubbish activity I am involved in.”

You can help COFAPRI in our efforts to assist women like Krik, who seek a better future, especially for their children.