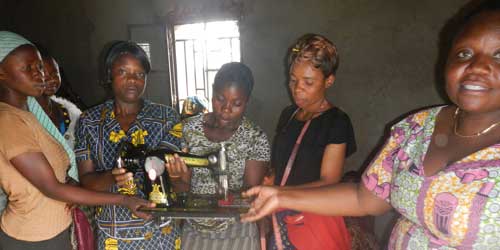 COFAPRI has been able to equip its sewing centre with three additional sewing machines; the total being now six machines. In the first half of the year, we trained 36 women in sewing skills... A further 26 others were trained over the subsequent months.


Progress in 2015 - From Strength to Strength

‘Every bit of support you do for us victims of war rape in the villages of the DR Congo builds our broken hearts, mends them; each and every different donation you give us shows your generosity, shows us there are people here and there who still understand our cases, and this means we can still overcome social hurdles, develop and reconstruct a society where we are cared about, and not discriminated against’.
Nsimire Cibalonza

Congolese Females Action for Promoting Rights and Development (COFAPRI) is a rural DR Congo grassroots organisation and Field Partner of Safe World for Women in the Eastern Congo. It was created in 2009. The organisation is helping women and girls victims of war rape, as well as helping children born of rape to remake their lives.

Since it has been operational in the villages of the DR Congo, there is a lot that COFAPRI has achieved. The women have become involved in various income-generating activities, and children have had school fees and materials paid for. Women’s activities include sewing, beading and knitting, animal rearing, small business, and cultivation, resulting in their children being able to go to school. This has been achieved successfully thanks to the material and moral support we often receive from our friends here and there from all corners of the world, and the founders and other members' financial contributions. Here is what we have achieved during the year 2015.

COFAPRI is currently supporting the school education of 92 children, the majority of whom are girls.

These children are scattered in different local schools in the villages of eastern DR Congo.

This last year, we have paid school fees for these children and we provided them with school equipment.

The number of the children seeking support from us is increasing with time, and the list we have is very long and continues to grow.

In 2013, a team of MBA students from the prestigious Indiana University Kelley School of Business, in the USA, involved COFAPRI through Safe World for Women in adapting a business manual which was originally created by the Power of Love Foundation. At the end of the training, they gave COFAPRI 250 US$ to pilot small businesses with the women.

We gave 50 US$ to five women each with which to start a business, and each woman agreed to be giving 5 US$ on a monthly basis in order to help other members involve as well. The women started selling small items - like sugar, salt, oil, rice, beans, flour, tomatoes, cabbages, soap, etc.

Today, 10 women are involved and they have so far saved a total amount of 150 US$, in addition to the income they have been able to contribute to supporting their families.

In 2015, COFAPRI has been able to equip its sewing centre with three additional sewing machines; the total being now six machines. In the first half of the year, we trained 36 women in sewing skills; they started in January and completed their programmes in June 2015. A further 26 others were trained in sewing over the subsequent months. They started in July and completed their programmes in December 2015. We have been able to pay the sewing teacher for these two sewing programs.

The women who have already completed their sewing programme are now able to sew and generate income for themselves and their families, as well as give a modest hand of support to the organization.

They now need to get their own machines so that they can produce more income. In addition, the women are knitting and beading, and they gain some money from these activities.

In 2009, the organisation started with one pig, but today the total of pigs owned by COFAPRI members is 23, without counting those they have sold to get money to support their families.

This year alone, we purchased five piglets that we gave to five teams of new members – one piglet in each team. The organisation has no pigsty. All animals are kept at members’ homes.

We hope to build a pigsty in the future.

The women are harvesting various products, like maize, sorghum, cassava, and soya. They sell some and use the remainder. The women aquired cultivation tools this year, 53 hoes and 45 machetes.

The Executive Secretary of COFAPRI, Ms Bahati, opened new COFAPRI branches in Katana and Kabamba in 2014, and in 2015 she started basic numeracy and literacy classes with the women.

On behalf of COFAPRI, Coordinator Ezechiel Mushagalusa participated to a Regional meeting on 'Youth Manipulation, Stereotypes and Violence' in the Great Lakes Region, organised by the Scouts of South Kivu.