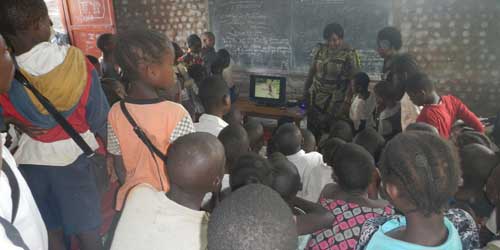 '”We madly love this big mirror with moving and speaking people; they are amusing. They are saying things we often see in our villages here...  Many people are changing after they have watched these things." Mihingano Alphonse

The Congolese Females Action for Promoting Rights and Development (COFAPRI) always thinks of ways to improve lives of rural people, importantly women and children in the villages of the DR Congo. It is in this context that we have been in touch with Thare Machi Education (TME) in the UK, in order to reach out to villagers in the DR Congo and teach them on ways to change their lives - thanks to the DVDs that TME often send us.

We have received a total of 72 educational DVDs from TME. The DVDs teach society about various health issues like: Ebola, Avoiding Drugs, Birth Control, Avoiding Malaria, Clean Water, Basic Hygiene, Making Compost, Avoiding Smoking, Dangers of Alcohol, Keeping our Teeth Clean, etc ….The DVDs we have received are in French and Kiswahili.

The audience (school children, teachers and headmasters; women, men, and village children) estimated at 750 people, have so far watched them in their respective locations. They learn a lot from them.

COFAPRI has also purchased basic equipment, with the support of TME, in order to reach out to a sizeable population in their different locations.

Areas where COFAPRI operates have no electricity so people travel to our centres to watch the DVDs, where we have a generator. The equipment is still not enough, considering the increasing number of people who are coming from different villages to watch the DVDs. We cannot be moving the materials from village to village; they can break along the way. Although we have set two centres where people will be meeting monthly to watch the DVDs, the number of attendees is still very high.

The two centres where people from different surrounding villages will be meeting to watch the DVDs are Munya and Ntendera; but in the future, we’ll need more centres of meeting as the number of interested people will have increased. It is in this context that COFAPRI has been suggested by hospitals, universities, and churches to work with them.

TME has been in frequent contact with COFAPRI in order to see together how to improve lives of rural women and children in Congo.

Recently, TME helped COFAPRI reach out to more people in the villages of the DR Congo. Thanks to the new equipment, COFAPRI is now able to reach more people in different areas. The people are pleased about the DVDs, as the images and messages are truly helping them change their lives.

The DVDs have been more popular than ever due to the equipment.

The DVDs that were watched were selected based on the needs expressed by the audience. We started by asking them what are the main points they would like to discuss. After discussion, then we showed them related DVDs and they were extremely happy.

The following testimonies given are from some of the people who got opportunity to watch the DVDs:

“Before I was a true smoker, and I could not know it was bad. I used to smoke because all the men here smoke. After I had watched the people in your stuff there, I learned that tobacco is harmful to our health. In the discussions with you (that is Bahati), I got additional information that when we smoke, we also put our lives in danger.

Again, this causes me to misuse our family budget as I take their money to buy tobacco. My teeth have been dirty, and my breath is not good. People say I smell [like]tobacco. Thank you. I have now changed; I no more smoke, as before. It is not easy to stop at once, but I am committed to stop. I thank you for bringing this in this area. It will change many.”

'”My favourite activity was to drink beer, and I used to buy it to all my friends who drink. I thought without beer my life cannot exist.

I used to fight with my husband because he never drinks beer, and I was drinking and coming back home drunk and too late. Look at me, here is a big scar. It was because of beer. I took a lot of it and I could not walk well. I fell into a hole and I spent the whole night there. In the morning my husband and my son had been looking for me everywhere the whole night but could not find me. Already discouraged and hopeless, someone told them I had fallen in a hole. They came and met me there. Pulled me out and took me home but I could not stop.

If I see the money I used to spend on beer, I feel shame, I feel guilty. I have damaged my family’s budget and my health because of beer. If I recall how much time I made my children and husband suffer because I did not cook, as I was running here and there in the village searching where they have decanted, I feel I am to blame. But in all this, I ask for forgiveness to all of you. My husband did well to let me know you exist in a neighbor village. When I came to your centre, I learned a lot of things. You did well to bring us these images that are speaking. They teach us what we did not know before. We thank you a lot.”

In fact, the videos are helpful as they use the languages the majority of the people can understand; that is Kiswahili. Other DVDs are in French. The latter is not the language everyone can speak. To get the message in it, an interpreter is needed to make the message go well in the ears of the audience.

Due to this, the people suggested to have DVDs in which they are speaking Mashi, the local language, for the people who are members of COFAPRI. This would require to record specific DVDs, and if possible pictures, for the people. This sounds nice since the audience will not need any third party to convey them the message. If the message watched gets straight in the ears of the people that would be more helpful than sending the message via an interpreter.

'”We madly love this big mirror with moving and speaking people; they are amusing. They are saying things we often see in our villages here. One can think they knew what people do here. The only difference is that the moving people in the mirror is that I do not know any of them. They do not look like the people here, and their language is different from ours.

On which land do these people live, and who is their king? The person who imagined to put these people in this mirror is great. We need next time to see our neighbours in the mirror and also if they can put men and women who speak our language, that would be wonderful. Many people are changing after they have watched these things. Our message is: 'Do not forget to tell the creator of this mirror the message we are sending him through you. Tell him, we love this and it is helping us change our bad behaviours to good ones; but we need to hear our language.'”

As mentioned earlier, we have been in contact with local leaders, hospitals, other institutions well as church leaders for we intend to extend our activities in urban areas as well and there, we can work with the same categories of people as it is in the villages.

Health conditions in the urban DR Congo are also decaying due to the effects of repeated wars in the country. Masses of rural people have fled to urban areas, and this has caused inflation of population. Having lots of people from different corners of the country, and with different behaviours, has made life conditions worse than before. We believe the messages contained in TME educational DVDs, and the images, are so powerful for impacting on people’s behaviours.

We hope TME can still help COFAPRI meet the needs of the local people. The people appreciate their contents; and accordingly, they have suggested to watch DVDs that are explained in the mother tongue. Also the people suggested they need more materials and DVDs so that all people can have access to watching them in their different villages.

They admitted their lives are changing, thanks to these videos.