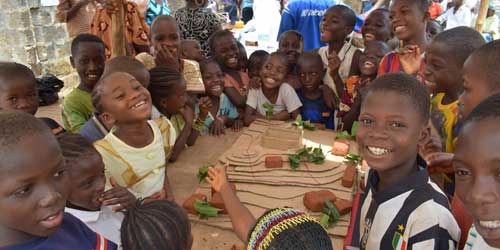 We were joined by two wonderful volunteers from the UK: Edward and James. Edward, from Building Trust International and SAWA, is helping with the design and construction of WYCF’s new school. James, who normally works for the OSCE Mission in Kosovo, is here helping WYCF with outreach and communications. While James returned to Kosovo in March, Edward will be with us for three months overseeing the construction.

Construction of a new school

We're building our third school in George Brook. The new school will be built from lime-stabilised rammed earth. A technology proven in other regions of the world including East Africa, rammed earth is a cost effective, strong, durable, and environmentally-friendly construction method.

Edward will pass on his skills to the local workers. He is also teaching four engineering students from the local university, Fourah Bay College.

On Sunday, 28 February, we held a community workshop to inform the new school, dividing attendees into three groups: men, women, and children. These groups alternated between three different activities: a drawing exercise of what they would like the school to look like; using a three-dimensional model of the site to move buildings around; and a presentation of the initial site plan and design.

Sanitation and classrooms in Kroo Bay

We have completed the construction of four new classrooms and a sanitation block in Kroo Bay. Now all six classrooms are furnished with new desks, chairs, blackboards, learning materials and, most importantly, children in sparkling new uniforms. Following recent teacher training, the parents said they are happy with progress at a recent open day.

We will continue to regularly update the WYCF social media and website on the school’s progress, so keep your eyes peeled.

Three WYCF students from George Brook, orphaned by the Ebola epidemic, with their new guardian.Many children in the WYCF schools were directly affected by Ebola, with numerous children either losing one or both parents to the virus.

The continued optimism and positivity of the children never fails to astonish us.