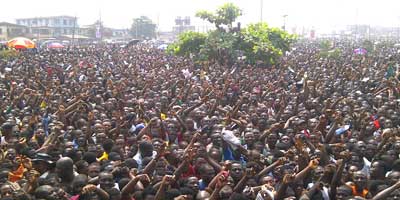 Today is DAY 3 of the nationwide strike, which goes with nationwide protests.

Amnesty International has issued a statement warning Nigerian government to remove a clause in the Nigerian constitution which kind of give police power to use gun on armless persons.

Celine OsukwuThe negotiation meeting of the Federal government and leaders of Organized labour still at stalemate. Federal agreed reduction from N141 to N80 whereas labour asked for reversion to former price (N65). FG still appeals to Labour for more dialogue. 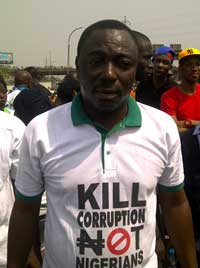 Reports from outside Lagos says that skeletal businesses go on in Benin in Edo state, Onitsha in Anambra and Asaba in Delta state.

Federal government has called on Civil Servants to resume duty but Civil servants say NO.

Meanwhile a Coca-cola branded vehicle with a Nigerian registration number was carrying arms and ammunition to Nigeria was impounded in Ghana. The driver, an Ogun State man with another Nigerian and two Ghanaians are presently in police custody.