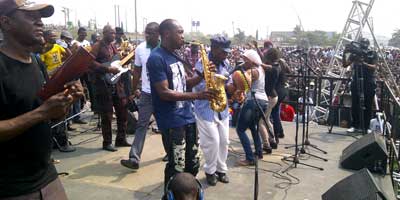 Its day 4 of the strike in Nigeria and the crowds from yesterday have almost doubled in Lagos.

Adepeju MabadejeThis is no joke! Some protesters don’t even leave the protest ground as they are seen clutching their mats and mosquito nets. Protesters walk miles and stand for hours to register their displeasure against government’s policy and what they perceive to be reckless spending.

In reaction to widespread protests against its policy, the government has maintained it will not shift its stance. 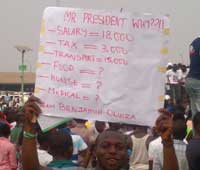 The governor of Nigeria’s Central Bank said on television this morning in relation to the removal of oil subsidy that ‘the days of government father Christmas are over.’

The question on the lips of many Nigerians is the moral capacity of the CBN governor to make this declaration when he confessed on national television that ‘he cannot remember when last he paid for his own fuel.’ 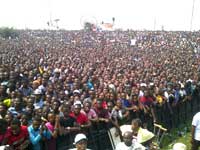 Photo source: via Olutosin Oladosu Adebowale It may interest you to know that in a country without basic infrastructures, Nigerians have been forced to provide their lights via generators due to epileptic electricity supply, drill their boreholes due to nonfunctioning of government water stations, and employ their on security guards due to security failures.

The people have refused to go back to work until the government policy removing the oil subsidy is reversed. The government has maintained its stand.

Who will blink first I can hear you ask? Only time will tell...

2012 Budget and monumental corruption: WHY WE SPEAK OUT!