Nigeria: Bringing Health, in the Face of Danger 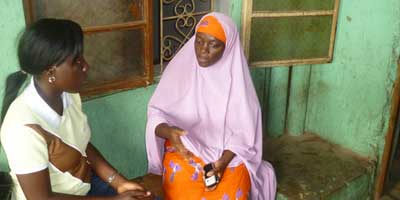 Last week, I had yet another opportunity of travelling up to North Nigeria. This time, my destination –  together with our programs coordinator, Afolabi Imoru Ibrahim, was Zamfara. Yes, you heard me! ZAMFARA.

For most people and organisations in other parts of Nigeria, Zamfara or anywhere up North in this season of ‘Boko Haram’ is a no-go area.

'Boko Haram' is an Islamist movement based in northeast Nigeria which strongly opposes man-made laws and modern science – and is also known to be a violent organisation that seeks to establish Sharia law in the country.

Coupled with its application of the Hadd* aspect of Sharia law, a trip to Zamfara was considered an unwise move by many – even if it was to save lives. (Sharia law was reintroduced here in 1999 – and since that time, a local had his hand cut off for stealing a cow and another also for stealing two goats).

A team from the Brown Button Foundation travelled to Zamfara to open a new hub for maternal healthcare.

Prior to our Zamfara trip, Brown Button Foundation’s (BBF) effort had been centred on the west of Nigeria.

Tackling the Face of Poverty

We needed to impact more lives and save more women at childbirth. Zamfara, it was decided, was the place to flag off our northern campaign. The reason was simple.

Using the result of the 2006 Census in Nigeria, Zamfara State has a population of 3,259, 8,946 people and only about 100 skilled health workers. This is not surprising, considering the high illiteracy rate in the North.

Maternal and child mortality is extremely high in the state where poverty is not only thought about, but seen. Primary Health Care centres are dilapidated, without water, electricity, a functioning laboratory and a befitting labour room even in the capital ‘city’ of Gusau. If poverty had a face, surely, it will be Zamfara! 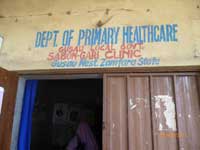 At the Sabon Gari Primary Health Care facility in Gusau, we met health worker Shafaatu Abubakar Jabbi, who took us round her facility. In shock and disbelief, the Brown Button team went round in silence.

The Sabo Gari Primary Health Care caters for more than 11 settlements in Zamfara state. People come from as far as 15 kilometers away to use the facility, which has a record of more than 300 patients every month and an average of 10-15 deliveries in a month.

Jamila Bello and Shafaatu Abubakar JabbiThe facility has no ward to admit patients, so all patients – including new mothers, are discharged after delivery.

Shafa is the only health personnel at this facility. Whenever she has a delivery to attend to, she is often assisted by a biologist, Jamila Bello. From the mats in the delivery room to the environment of the laboratory extension, it’s almost as if I had time travelled two centuries back.

Labour roomShafa informed us that few weeks prior to our coming, a new baby had been infected with tetanus due to the use of a rusted blade to cut his umbilical cord.

Distance in getting to the health center had prompted a home delivery by the baby’s mother using unskilled and untrained birth personnel.

This mother survived the ordeal – only a few do…

Action Plan to Save Lives

Our action plan: Brown Button commenced intervention by donating a large quantity of insecticide treated nets, as well as birth kits containing gloves, scalpel blades, gauze, cord clamps, and delivery mats to birth attendants in Zamfara. We have also flagged off our training of birth attendants in the state with these kits.

For Sabon Gari Health Center, we intend to commence a facility upgrade, starting with the donation of bed posts and mattresses to the facility.

We believe at Brown Button Foundation, a woman's location at childbirth should not be an excuse or factor in determining on whether she lives or dies.

So there you have it: a nice summary of our trip to Zamfara where we dared ‘Boko Haram’, set aside religious differences, ignored the distance, and scored a victory for women’s health!

The welcome we received was very warm.

* Within Sharia law, there is a specific set of offences known as the Hadd offences –  crimes that are considered to be "claims of God": theft, fornication, adultury, alcohol, and other intoxicants, and apostasy. These crimes are  punished by specific penalties, such as stoning, lashes or the severing of a hand. The penalties for Hadd offences are not universally adopted as law in every Islamic country.