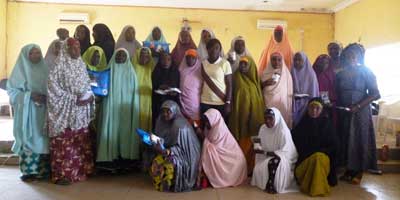 A large vast land, cattle grazing, motorbikes on dusty roads, and peering looks at strange faces in jeans and tee shirts...that was the general atmosphere when the Brown Button Foundation (BBF) team arrived Zamfara State, Nigeria, to flag off its northern campaign with the training of birth attendants in the State.

Brown Button Team with members of the Future Hope Foundation, Zamfara. Photo: BBFTop on the minds of the Brown Button team, consisting of Founder/Executiver Director Adepeju Mabadeje and Programs Coordinator Ibrahim Afolabi Umoru, was the challenge ahead in Zamfara, where health personnel were inadequate, and health structures falling apart.

Zamfara accounts for a large number of child and maternal deaths in Nigeria.

Our strategy in Zamfara to deal with the issue of inadequate personnel is to attach Traditional Birth Attendants (TBAs) to existing health facilities and train them on vital issues such as recognizing complications in pregnancy, timely referral, as well as facility upgrade for existing health centers.

Interactive session. Photo: BBFWe also hope to be able to prevail upon the necessary authorities to build more health facilities in the villages and rural areas.

At the end of the quarterly training and monitoring which will last a period of one year, spread across all 14 local governments in Zamfara State, the TBAs will have acquired a reasonable level of skills from the training.

They will be awarded a certificate as evidence of the skills acquired.

After the flag off ceremony by the Senior Special Assistant to the First lady of Zamfara State and graced by the Commissioner of Health – as well the Commissioner of Women Affairs who praised the laudable initiative, we commenced the training of birth attendants from Gusau Local Government.

BBF trainer, Shafaatu Abubakar Jabbi, demonstrating the use of the kits. Photo: BBFDue to the large scale illiteracy in the north, with only two of the attendants understanding English, the highly interactive training was conducted in Hausa language by health worker Shafaatu Abubakar Jabbi. Using our  delivery kits, which have scalpel blades, soaps, gauze, gloves, cord strings, and delivery mats supplied by our partners, Birthing Kits Foundation, as well as our insecticide treated mosquito nets, health worker Shafaatu took participants through a practical demonstration of its usage.

At the end of the first of the series of trainings that will follow for these attendants, a monitoring and evaluation form is given to the health officers in charge of facilities to which the birth attendants have been attached, so that progress can be properly monitored.

We are delighted to embark on this life-changing journey for the women of Zamfara –  who prior to our interventions, have been bearing their yoke in silence.

We won’t stop till we see the change we seek!