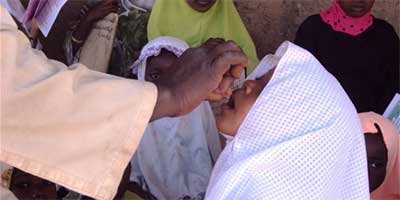 For years, polio vaccination has faced strong resistance within conservative Islamic communities in northern Nigeria, largely due to a deep distrust of the West, persistent rumours that the vaccine is harmful, and the house-to-house approach taken by immunization campaigners, which many saw as intrusive.

Over recent years, polio campaigners have changed their methods to try to win over reluctant community members and religious leaders - to mixed effect. In February of this year, 10 polio vaccinators were killed in the northern city of Kano by anti-western Boko Haram militants, the latest setback to efforts to eradicate the virus from Nigeria.

The country is one of only three where polio is still endemic. In 2012, Nigeria recorded 122 cases - over half of the global total that year.

IRIN spoke to residents, imams and health workers in Kano State to discuss the roots of ongoing vaccine suspicion.

Sheikh Nasir Muhammed Nasir, imam of Fagge Juma’at Mosque, the largest in Kano, is an advocate of polio immunization.

“There is nothing wrong with the polio vaccine. The major reason why people reject it is the deep-seated suspicion they harbour against the West, particularly the United States due to its foreign policies in the Muslim world, especially the war in Iraq and Afghanistan,” he said.

“The US invasion of Iraq and Afghanistan - which caused deaths and destruction - is seen by many Muslims here as a war on their brethren. They wonder how the same countries responsible for this colossal carnage can now turn and save lives elsewhere. To them, it doesn’t make any sense that you offer to save my children from a crippling disease yet are killing my brothers,” said Nasir.

Mamman Nababa, a father of three in Kano, said: "I can't understand how the West will spend millions of dollars in providing medication against polio for our children while they systematically killed 500,000 Muslim children in Iraq by imposing an embargo that denied them access to basic medicines.

“They are doing the same in Iran, where they imposed sanctions that make drugs scarce. It doesn't make sense to kill my brother's child by denying him life-saving drugs and then expect me to believe that you want to save my child from polio for free.”

Residents also expressed scepticism of the focus on polio, saying other diseases should be given priority.

"How could I be so naive as to allow my children to be given polio drops by people who go door-to-door giving the vaccine free while the government has failed to provide medication for the most urgent diseases affecting us, such as malaria and typhoid?” said one Kano resident.

For years there has been suspicion that the polio vaccine is laced with infertility hormones as part of a US-led plot to reduce the Muslim population. The Kano State government suspended polio immunization between September 2003 and November 2004 following the spread of such rumours by some Muslim clerics. The suspension led to an unprecedented number of infections and transmission of the virus to 17 countries that had been polio-free.

Kano resident Zulaihatu Mahmud says most people understand polio is caused by a virus, but even so, she and others fear the vaccine could be harmful: “Nobody wants their child to be crippled by polio, and nobody wants her child to be sterile, either.”

In 2003, to address these concerns, the Kano State government and federal government set up committees of doctors and clerics to test the polio vaccine. Following trials in Nigeria, South Africa and Indonesia, they declared the vaccine safe.

However, they also confirmed the presence of traces of two sex hormones - oestrogen and progesterone - that are used in contraceptive medicine, which reinforced the sterility rumours in some communities.

Sadiq Wali, a professor of medicine who was involved in the committee, explained that the vaccine is developed in a culture made of monkey kidney, which contains the two hormones. Since hormones are highly water-soluble, traces are bound to be found in the vaccine, but they are too minute to have a contraceptive impact, he said. The amounts are so infinitesimal that special equipment is needed to detect them.

Much of the longstanding distrust of Western influence among northern Nigerians is linked to the British colonial occupation and its dealings with the Islamic caliphates that had ruled the north, explained Aminu Ahmed Tudun-Wada, head of the Kano State Polio Victims Trust Association.

“Almost a century after the introduction of Western education, there are still parents who don’t enrol their children in school because they believe it is a ploy to convert them to Christianity, and the suspicion has its roots in the British conquest. It is the same sentiment playing out with the polio vaccine,” he said.

In 1996, US pharmaceutical manufacturer Pfizer conducted a trial of the meningitis drug Trovan (trovafloxacin) on 200 children at the state-run Infectious Diseases Hospital (IDH) in Kano. At the time, a triple epidemic of meningitis, measles and cholera in the city had killed around 12,000 people. One hundred children were put on Trovan and 100 on the antibiotic ceftiaxone. Eleven children participating in the trial died, and others suffered paralysis, brain damage and slurred speech. Pfizer claimed it was meningitis that had made the affected children sick. The families alleged the clinical trial was improperly conducted and lacked parental consent.

In 2003, Kano State filed a US$2.75 billion law suit against Pfizer, which ended in an out-of-court settlement in 2005. Several of the children involved have also been compensated. For anti-polio campaigners, the case gives “practical evidence that there is harm in the polio vaccine, just like Trovan, with which they convinced parents,” said Abdullahi Musa, a Kano-based paediatrician.

“The Pfizer drug trial was a real setback against not only polio vaccination but to other child health interventions in the north, because it destroyed public confidence and made the anti-polio campaign readily believable,” said polio vaccinator Abdulhamid Barau.

Several people in the north referred to the introduction of cigarettes to Nigeria by the British 50 years ago. Kano tobacconist Habu Iro and several residents told IRIN that in the 1950s, when people bought cigarettes, they would find money in the packet. The amount included was gradually reduced as people became addicted.

“We now know what [the] cigarette does to human health. The white man will never give anything for free. It is the same thing with [the] polio vaccine. They are hiding something,” 73-year-old Kano resident Dije Umar said.

Early polio campaigners’ approaches were also seen as too insistent, combining radio advertisements, community workshops and teams of health workers going door to door, according to a polio expert with an international agency who asked to remain anonymous.

But because most inoculations take place in health clinics or hospitals, many families did not trust health workers arriving at their doorsteps.

One polio expert, who wished to remain anonymous, called initial campaigns “aggressive”. “They… sent a wrong signal to parents. We didn’t take account of the social dynamics then,” he said, referring to the need for more efforts to get communities on board.

Before 2005, polio campaigners partnered only with political and health authorities. They later learned to work closely with community and religious leaders. Most northern states have since formed polio immunization task forces with village and religious leaders as members.

The results were largely positive, with greater community acceptance and an improved understanding of polio and the vaccine, said an anonymous polio expert, who said uptake of the vaccine had increased since 2005.

But in February of this year - following the killing of the 10 polio vaccinators in Kano - the approach changed once again. The campaign is now limited to health clinics and hospitals as part of routine immunizations, and it is entirely government-led.

Many doctors fear this approach will threaten eradication efforts. To eliminate polio, vaccinators must reach at least 90 percent of children, giving each four doses over a 6-12 month period, according to the World Health Organization.

“The halt in house-to-house immunization is a serious threat to eradication… A large chunk of children will have no access to the vaccine and will be at risk of infection,” Adamu Isa, a paediatric nurse at Nassarawa Specialist Hospital in Kano, told IRIN.

The National Primary Health Care Development Agency (NPHCDA), which oversees polio immunization in Nigeria, plans to hold a national workshop in Abuja for Muslim clerics and traditional leaders to clear up all misconceptions about the vaccine.

“It will be frank, honest and no-questions-barred discussions where we will clear any misgiving they have about the polio vaccine with concrete proofs and evidences, because once we secure their support, we secure the confidence of the public in accepting the vaccine,” NPHCDA’s director-general, Ado Mohammed, told IRIN.