School tries to heal the divide in northern Nigeria 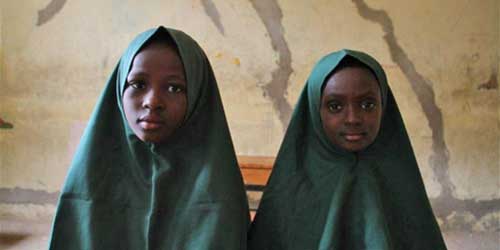 Falmata Yakub and Isha Rachalla both want to be doctors when they grow up | Photo: Obinna Anyadike/IRIN

The kidnapping of more than 200 girls from a secondary school in Chibok in northeastern Nigeria’s Borno State in April by Boko Haram militants, and a so far unsuccessful high-profile campaign to free them, exemplifies the insecurity-driven education crisis in the area.

Since March all public schools have been closed in Borno State - one of the three states in the northeast hardest hit by the violence. The tragedy is that, according to a 2010 national literacy survey, Borno already had the sixth worst literacy rate for youths in any language out of Nigeria’s 36 states. What formal education currently exists in Borno has been through a handful of private schools that have kept their gates open.

One of these is a school for orphans and vulnerable children in Maiduguri, providing free primary education. What sets Future Prowess Islamic Foundation apart is the deliberate policy of its founder, Zannah Mustapha, to care for children from families on both sides of the conflict - Boko Haram and the security forces.

“We are trying to avoid a catastrophe,” said Mustapha, a lawyer, who has played a role in abortive mediation efforts between the government and Boko Haram. “We want the two sides of the divide to grow as friends, not a case of ‘You killed my father, you killed my mother, I must have revenge’. No. They must learn together. We are providing that security.”

The seven-classroom school delivers a blended curriculum of Islamic tuition, and the standard syllabus approved by the state education board, taught in English. Although Boko Haram is notorious for its rejection of “Western” education, and some parents (many of them widows) objected to what they viewed as “pagan” lessons, the school was able to challenge those beliefs.

“English is just a language, many British people are also Muslims,” said Mustapha. “And mathematics, how is that Western? It was invented by the Arabs.”

The five-year conflict has exacerbated the northeast’s historically bad social indicators. More that 42 percent of children are stunted by malnutrition (compared to just 16 percent in the southeast), according to the government’s 2013 Demographic and Health Survey. The deep disruption of the local economy by the violence has worsened the situation, driving up prices and shrinking employment.

The school’s response has been a breakfast feeding programme for its 420 pupils. “It’s rice and beans or moi-moi [a bean-based sponge], something that can fill the stomach for some time,” said headmaster Suleiman Aliyu. “There is no way a child can learn properly on an empty stomach.”

It is funded by local benefactors, and “as a result of the programme a lot of parents are registering their children - not for the learning, but for the breakfast alone.”

This is a community traumatized by violence - shootings, bombings and kidnappings by Boko Haram; retaliatory beatings, arrests and extra-judicial killings by the security forces. “We are serving as teachers and parents for the orphaned children,” said Islamic teacher Hassan Sharif al-Hassan.

“English is just a language, many British people are also Muslims. And mathematics, how is that Western? It was invented by the Arabs.”

“Many of them have no guardians at home. When they come to school we give them what they can use in their lives in terms of respect, in terms of behaviour. But it’s not a normal childhood. Sometimes you can ask a pupil why they are silent, and the child can start crying. Psychologically we can understand they have internal problems.”

Abubaker Tijjani is aged 14 and wants to be an accountant. But right now he would just like to have his father back, who died a year ago. “I’m sad about that, I miss him,” he told IRIN. “I’m not OK with life.”

The association’s revolving micro-credit fund also tries to provide some financial help with a little business capital. In the vulnerable households the children are out on the streets after school selling groundnuts, sweets and water.

The community has supported the school and some prominent people are sponsoring individual students. Mustapha has, according to the headmaster, ploughed much of his own money into keeping the school open. That has included building a fish farm that provides a measure of financial independence, helping pay teachers’ salaries, and providing the free uniforms and books the students need.

But aside from the US Agency for International Development recently agreeing to provide some desks, and the Swiss embassy paying for the trauma counsellor, there is no other outside assistance.

“International partners don’t often come here because of the insecurity,” Mustapha said. “Individuals can’t do what we need. We need institutions like the UN, UNICEF, to help.”