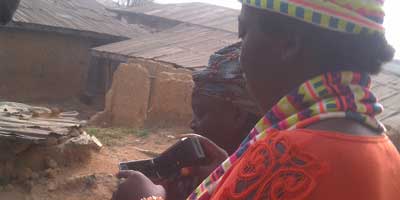 Olutosin Abedowale reports on FGM and explores the reasons for the perpetuation of the practice.

We sat on a long bench amongst Baba Oloola’s clients-in-waiting. This is Oloola Akande’s house: he is the first in the lineage of his present Oloola’s family. His great grandfather and grandfather were the leaders of Oloolas in the Yoruba kingdom, Western Nigeria. In front of the compound is the giant picture of his great grandfather on the wall.

They are well known for making bodily incisions on children who suffer convulsions. This has earned them the popular name kobomoje, which literally means that 'bodily scarification does not destroy/spoil the beauty of a child'.

Baba Oloola is a professional herbalist who takes care of all bodily ailments; according to him, he is an expert in child delivery, and he is well known for his roots and herbs for curing convulsions in the traditional way, by making incisions on the sick people’s bodies (indigenous scarification and body markings in traditional medicine) and ethnic facial marks.

Above all, he circumcises male children and cuts females' genitals, too.

Looking around the compound reminds me of our house in the village: it's built with hand-molded brown mud. Not cemented and yet displaying the beauty of a rural African village. Although it is a very old building, that has witnessed centuries in years, it must have also witnessed the successful mutilation of thousands of innocent girls. Girls of different ages and sizes who had screamed under the sharp knife of this skilled generational lineage of Oloolas (traditional ‘circumciser’/female genital ‘cutter’).

Article 5 of the Protocol to the African Charter on Human and People’s Rights on the Rights of Women in Africa titled Elimination of Harmful Practices states:

When it was our turn, we explained our mission to Baba Oloola and he decided to sit with us outside. He sat on a bench that was facing us before he informed us that his great grandmother, who was the first Oloola, was buried right under the bench which we sat. According to him, his great grandmother was the last female Oloola in the family, because after his great grandmother, women were banned from the Oloola’s profession as that was when they get married: their skills were automatically transferred to their sons – and daughters were not the direct descendants of Oloola.

At the inception of the discussion, Baba Oloola said that both female and male children’s genitals must be cut on the seventh day. This is the tradition and according to him, that is how it would remain forever. He revealed that there are more than 200 Oloola like him in the town and each of them cuts female genitals. He gave a comprehensive analysis and an assurance that he would even allow us to witness and video record the cutting of the next female child that is brought into his compound the following morning.

According to him, cutting the flesh that covers the clitoris of a female genital in the presence of everyone will prove to the world that female genital mutilation is the right thing to do for every girl child; it is the only practical aspect of his work that would convince a doubting Thomas that a female child’s genital must be cut.

As this point, a woman came in to book an appointment to cut her girl child the following morning, she had only a thousand naira and Baba Oloola refused the amount and the woman walked away to search for a lesser Oloola, who will happily accept a thousand naira.

Baba Oloola boasted that there is no single girl whose genital is not mutilated in the community because according to their belief and culture, it is a shame to leave a girl child uncut. He further revealed that his grandfather had laid it down, and it must be followed because the Quran says, “Woe unto a son who rejected his father’s profession.”

He pointed out that it is written in the Bible that every child should be circumcised and that, according to him, the unidentified verse says e ko omo na ni ila which literally means “circumcise the child”.

There are more than six young men between the ages of 25 to 40 working for Baba Oloola and, he explained, they are his lineage - either his siblings or his sons, and they are all interested in following their grandfather’s path.

Inside Baba Oloola’s pocket is a very sharp knife which was revealed when it was time to circumcise a baby boy after an accepted negotiation. The short and sharp knife was wrapped with a rag. He is the only custodian of the knife, he only release it whenever he is too busy to work.

The baby boy gave Baba Oloola the opportunity to display his skill in our presence and he invited us to a small table that was placed at the center of the compound.

The baby was laid naked on the table and he began the minor surgery on the boy. He told us that the sharp knife is what he uses for both female and male cutting and the general body cutting for anyone suffering from convulsion.

Within a few minutes, he cut the foreskin, pushed the skin downward to expose the whitish “germ” underneath the foreskin. According to him, the whitish substance causes everlasting scratching if any child is not cut or circumcised as the case may be.

After the cutting, a black substance known as adeje (ada eje) – a concoction that stops bleeding, was applied on the penis; it is a black powder. After which a rag was used to wrap it, according to him, the rag will be removed on the third day and ‘eko’ (which is a stable food in Nigeria, made from corn paste) will be mixed with alum and used to wash the genital until it is clean. When it is clean, the mother will begin to apply engine oil on it for four days.

In Nigeria, there is no federal law banning Female Genital Mutilation or cutting, but Section 34(1)(a) of the 1999 Constitution of the Federal Republic of Nigeria that states, 'no person shall be subjected to torture or inhuman or degrading treatment,' as the basis for banning the practice in Nigeria.

Nigerians continue to practice female genital mutilation out of ignorance and the general belief that women who are not mutilated are promiscuous.

There are three major and different types of female genital mutilation in Nigeria:

Baba Oloola explained further that the removal of the clitoral hood is what he practices and this cannot be done by any medical doctor because it is the work of Oloola alone. He gave four major reasons why the hood must remove it:

Inasmuch as Baba Oloola’s ignorance cannot be excused, the fact still remains that he has enough misinformation to lead millions of people astray in the 21st century.

He has a conviction that is sustaining him spiritually, economically, socially and politically. He is well respected as both the spiritual leader and a community leader.

His clients hold him in high esteem and most of them refer to him as Agbomola, which means the saviour of a child. If the general populace has enough correct, adequate and relevant information about female genital mutilation, Baba Oloola will live without a client who needs his service to mutilate female genitals.

Perpetuating the Myth - FGM as 'Prevention' of Promiscuity and Sex Trafficking

An uneducated/semi educated, educated but culturally immersed mother, whose only convincing information about female genital mutilation is ijoba ni ko need ki a maa dabe fomobirin mo which means, our government says there is no need to mutilate the genital of a female child, does not have any genuine reason to stop Oloola from mutilating her daughter’s genitals.

Baba Oloola continues to reiterate his easy answer to that statement as:

'Is it the government who helped you to carry the pregnancy for nine months or the government will soon help you to repatriate your promiscuous uncut girl from Italy when she turns to a dog in the nearest future?'

Crucial to Engage Parents to Bring About Change in Mindset

Passage of law is varied, and radio, television, newspaper announcements are very good ways of warning people against genital mutilation, but adequate information, engaging parents – especially mothers and health workers, in continuous empowerment programmes and constant work and talk with the religious institutions in order to change their mindsets about this issue are some of the genuine measures of ending female genital mutilation.

Female genital cutting can only end in Nigeria if there is a mindset shift from parochial beliefs about gender inequality.