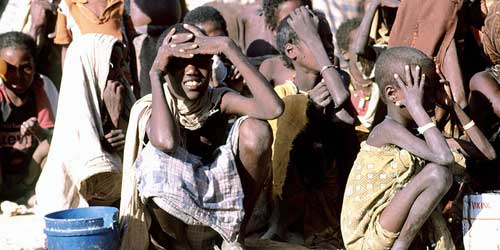 Somalian children wait for food provided during Operation Provide Relief - 1992. These children were the lucky ones. Today, there are still many vulnerable children in Somalia. Image souce: Wikimedia | SSGT Charles Reger

Somalia made headlines again on the 26th July as a bomb explosion outside the Jazeera Palace Hotel in Mogadishu killed 13 people and injured more than 40 others. The attack, which was carried out by the al-Qaeda linked Islamic group al-Shabab, was quickly condemned by the international community with both the UN Mission in Somalia and African Union Mission in Somalia releasing statements deploring the attack, while US National Security Council spokesperson, Ned Price, said in a statement:

‘This attack is yet another reminder of the unconscionable atrocities that terrorist groups continue to perpetrate against the people of Somalia’.

This attack is one of many that has seen Somalia receiving international attention over the last few years, from the terrorist attacks of al-Shabab to the assault of Somali pirates on international ships and private yachts, Somalia has often dominated international headlines in recent times. However, there is one problem within Somalia that receives little notice and remains largely unknown by the international community – the under-reported issue of child piracy.

While the UN, African Union, and US National Security Council are quick to respond and release statements in the wake of terrorist attacks from al-Shabab, as the attack on the 26th proves, they continue to remain silent over the use of children by pirate groups. This is despite the fact that roughly one-third of Somali pirates are believed to be below the age of 18.

The most famous case of child piracy happened in 2011, when Indian naval forces liberated the Mozambique fishing vessel Vega 5 from pirates and it turned out that 25 of the 61 people arrested – 40% of the entire pirate crew, were under the age of 18. Even more shocking was the fact that four of those apprehended were believed to be under the age of 11.

Despite this, the international community and bodies such as the UN failed to comment on the matter, allowing the growing problem to go unreported and unchallenged.

The failure of the international community to address and acknowledge the problem of child piracy is leading to serious children’s rights abuses, as they are continually recruited and used by pirate commanders for the same reason warlords recruit children to be soldiers: they are easier to manipulate and are seen as expendable by the groups which recruit them. According to some reports, once a piracy mission has been completed, some pirate groups will throw the young people involved overboard, so that there is more money to share out among the adults. They will then simply recruit more children for the next mission.

In Somalia it is often the case that a child will experience both the life of a child soldier and child pirate, as the former UN Representative for Children in Armed Conflict, Radhika Coomaraswamy, discovered when she visited Somalia in 2010 and reported that child soldiers often escaped the ranks of Islamic militias only to then become pirates. Despite all this, international law currently only covers the protection of a child who has been recruited into armed conflict, not those who have been recruited into maritime piracy.

Child piracy will never cease to exist until the international community stops ignoring the problem of child piracy and starts to accept that it is a growing problem.

After all, child piracy is not just a phenomenon that is happening within Somalia; there is evidence that children are also used in piratical activity off the coast of Nigeria, Haiti, the Gulf of Guinea and the Straits of Malacca – and if we ever want it to stop, then it is time that the international community start to recognise and properly address the problem.