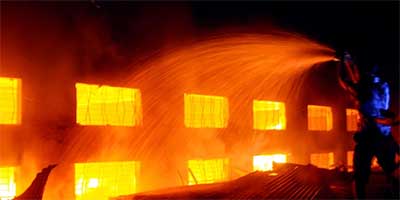 A Bangladeshi firefighter battles a fire at a garment factory outside Dhaka, Bangladesh on November 24. At least 112 people were killed in a fire that raced through the multi-storey garment factory just outside of Bangladesh’s capital. | Photo: AP/Hasan Raza

Thousands of angry textile workers demonstrated in the outskirts of Dhaka on Monday after a fire swept through a garment workshop at the weekend, killing more than 100 people in Bangladesh's worst-ever factory blaze.

Another fire broke out in a multi-storey garment factory in a Dhaka suburb on Monday, but a fire brigade official said the blaze was under control and there were no immediate reports that anyone had died in the latest blaze.

Workers of Tazreen Fashions and residents blocked roads and forced the closure of other factories in the industrial suburb of Ashulia, where the huge fire started on Saturday, demanding that those responsible for the disaster be punished.

"I haven't been able to find my mother," said one worker, who gave her name as Shahida. "I demand justice, I demand that the owner be arrested."

Police and officials said narrow exits in the nine-storey building trapped workers inside, killing 111 people and injuring more than 150.

"Whenever a fire or accident occurs, the government sets up an investigation and the authorities - including factory owners - pay out some money and hold out assurances to improve safety standards and working conditions. But they never do it."

Working conditions at Bangladeshi factories are notoriously poor, with little enforcement of safety laws, and overcrowding and locked fire doors are common. More than 300 factories near the capital shut for almost a week this year as workers demanded higher wages and better conditions.

At least 500 people have died in clothing factory accidents in Bangladesh since 2006, according to fire brigade officials.

Bangladesh has about 4,500 garment factories and is the world's biggest exporter of clothing after China, with garments making up 80 percent of its $24 billion annual exports.

Hong Kong-listed Li & Fung said in a statement that it had placed orders for garments from Tazreen Fashions which were being manufactured on the premises where the fire broke out. It said it would provide relief to victims' families, and carry out its own investigation into what caused the blaze.

A spokesperson for U.S. retail chain Wal-Mart Stories Inc. in India said the company was "trying to determine if the factory has a current relationship with Walmart or one of our suppliers".