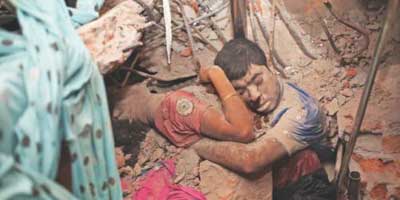 For me, nothing captures the human tragedy of the recent building collapse in Savar, Bangladesh more poignantly than the image of the man cradling a woman in his arms, her broken body balancing upon slabs of broken factory rubble. As their dead bodies lay in an embrace evocative of a Renaissance period sculpture, the one thing that is glaringly clear is the cost of cheap labor: real human lives.

As a child in Dhaka in the 1980′s, I grew up during the beginning of the Ready Made Garment (RMG) era. As the sector quickly expanded and developed, it thrust thousands of young women into the workforce. On our way to school every morning, we would always see throngs of young Bangladeshi women flood the roads in their neon colored traditional salwaar-kameezes, bright ribbon strings tied in their hair. They were all headed to work in the factories.

I did not know it at the same time, but what was happening in Bangladesh was a social revolution, instantly empowering women by making them financially independent, many for the first time in their lives.

The Death Toll of the Savar Tragedy is Expected to Exceed 500. Image Credit: Spiegel.Today, approximately 3 million women currently work in the sector, and while the extent to which they are exploited within the industry can be debated, few can argue that employment in a garment factory puts food in the mouth of workers, and their families.

Vidiya Amrit Khan, Director of Desh Garments Limited and Director of the Bangladesh Garment Manufacturers Exporters Association (BGMEA), says that the Savar tragedy unfairly casts blame on the garments industry just because of a “few bad apples.” Khan’s late father, M. Noorul Quader, pioneered the 100% export oriented Ready Made Garment (RMG) industry. Today, she runs her family business in Bangladesh, and states that we cannot scapegoat a sector we owe so much to:

I feel so sad and angry that people who are generally not employers of large numbers of people, or involved in mass production, have been making such harmful, and often vicious comments about an industry which has built Bangladesh, and has given so much independence to our women. This sector has grown into a $20 billion industry in about three decades, with 90% of its workforce being women. This is something to be very proud of.

Verane Muyeed, LR Paris‘s Washington, DC Office Manager, worked in the Dhaka garment industry for over a decade, and says that while the sector is not perfect, the role the garment industry has played in empowering Bangladeshi women should not be overlooked:

Women Walking to Work. Image Credit: NY Times.The fact remains that though micro-finance is heralded as a triumph for helping Bangladesh alleviate poverty, factory work for young women across the country gives families the income, health, and independence that they need to get out of poverty.  In my 17 years of experience working with Bangladeshi garments factories, I have seen the evolution of the industry, as the making of garments, the compliances, the working conditions have improved, and are still improving, and empowering a new generation of workers.

In the last thirty years, Bangladesh’s garment industry created a new burgeoning middle class in a country with one of the world’s largest economic gaps. The wealth generated from textiles is the single greatest source of economic growth in Bangladesh. While initially tea and jute were the most profitable sectors, that all changed in the 1980s when the garment industry in Bangladesh became the main export sector, and a major source of foreign exchange.

Over the years, the list of global retailers who manufactured their clothes with cheap labor in Bangladesh grew endless, from JC Penny to Mango to Zara to Walmart to H&M to Tommy Hilfiger to Bennetton. Whenever I went abroad as a Bangladeshi, roaming through large Western department stores, and I would come across clothing with the “Made in Bangladesh” label, I would feel my heart swell with pride.

But for all these years, us Bangladeshis have kept a secret. We all have been compliant in covering up the dark underbelly of our country’s booming garment sector. Even though the string of garment fires caused international outcry last year, Bangladeshis knew this was nothing new. Fires had been breaking out in overcrowded factories for decades, long before social media and the Internet let the world know about the deaths.

Women in Bangladesh Make Up the Majority of Workers in the Garment Sector, Many Are Still Looking for Family Members. Image Credit: Epoch Times.Savar is different, not only because it is the worst industrial tragedy in Bangladesh’s history, but because it exposes how rampant and deep corruption run in a country where a bribe can buy you what you want, and laws are generally not implemented. What does it say that today Bangladesh is at a point where we cannot even guarantee the workers, who are the backbone of our economy, that they won’t die at their job site from completely preventable causes?

The truth is, we all have blood on our hands. From the Western brands to the Bangladeshis factory owners to the consumer hungry for cheap clothes, we are all guilty. But pointing the finger at the Western buyers is not the solution. If they cannot get their products made in Bangladesh, they will just go somewhere else, like the textile factories have done all through history.

The solution has to come from us. The change has to come from Bangladeshis because the Savar tragedy can happen again, and not just in the garment sector. It can happen anywhere in Bangladesh. Experts estimate currently there are over 6,500 vulnerable buildings in the country, and warn that Dhaka can become unlivable.

Ultimately, the responsibility, with outside help and pressure, must come from Bangladesh because only we the people can bring about genuine, real change. Boycotting products manufactured in Bangladesh is not an option, or the solution, and we all know it. As Sir Fazle Hasan Abed states in his recent editorial, ”Made in Bangladesh should be a mark of pride, not shame.”

This article was also published on Forbes Woman