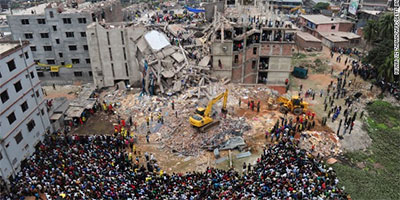 A day after a Bangladesh building collapse killed nearly 200 people, rescuers clambered through the mangled ruins Thursday, desperately searching for people trapped in the rubble.

The eight-story building on the outskirts of the capital, Dhaka, caved in Wednesday, leaving a chaotic mass of broken concrete and twisted metal.

It housed garment factories employing about 2,500 workers, many of whom had been uneasy about entering the building after cracks appeared Tuesday.

But the owners of the factory told them to report for work, claiming the building was safe, survivors said.

The resulting catastrophe is the latest to befall Bangladesh's accident-prone garment industry, which employs more than 4 million people -- most of them women -- but regularly comes under scrutiny for its slipshod safety standards.

It also raises tough questions for the Western brands that have their products made in the South Asian country's low-cost factories.

The human tragedy continued to unfold Thursday at the scene of the disaster in the suburb of Savar.

More than 1,000 people have been injured and an unknown number -- some dead, others still alive -- remain buried within the structure's tangled remains.

"There's still people alive in there," said Col. Shayekh Jaman, a military official involved in the rescue effort. "It is difficult to say how many. We are moving chamber to chamber looking for people."

He said about 1,400 people had been rescued so far.

The army official overseeing the rescue operation, Maj. Gen. Abul Hassan Sarwardy, said the efforts would continue until every single person inside the rubble had been recovered, according to the national news agency Bangladesh Sangbad Sangstha (BSS).

But Sarwardy cautioned that rescuers proceeded slowly because of fears the structure's ruins could collapse further.

Images from the scene showed rescuers standing on precariously balanced concrete beams and looking through crevices in the wreckage.

Flags around the country were flying at half-staff Thursday after the government declared a national day of mourning.

Video from the scene on Wednesday showed injured victims being whisked away on stretchers and crews carrying limp bodies from the ruins of the building.

Some onlookers wept while others frantically searched for missing loved ones, sometimes digging with their bare hands to reach people buried in the wreckage.

Siraj Miah said his wife is missing after going to work Wednesday morning.

"After learning that the building collapsed, I rushed here looking for my wife, but until now I haven't found her," he said.

Abdul Alim, a day laborer, said he heard people screaming inside the building and tried to help them.

"We couldn't make our way to get in," said Alim, one of thousands of onlookers who tried to reach trapped victims before military, fire and civil defense rescuers arrived at the scene.

Authorities say they have not determined what caused the building to collapse.

Workers from the garment factories said after the cracks were discovered Tuesday, managers initially ordered them not to report to work the next day.

But factory owners later reversed the order, telling employees that the building was safe, said Marjina Begum, who worked on the sixth floor.

Many workers were hesitant to show up Wednesday, but reported to work because they were afraid of losing their jobs, she said. More than a dozen other workers corroborated her story.

Managers for the garment manufacturers housed inside the building could not be reached for comment.

M. Atiqul Islam, president of the garment manufacturers association, said owners kept the factories open after the building's owner assured them that there would be no problems with the cracks.

The national news agency reported that the owners of the factories and the building had gone into hiding. They are facing separate cases from regulators and police over the construction of the building and the exposure of the workers to the fatal accident, the agency said.

Employees of a bank branch were removed from the building Tuesday after a crack was detected and were ordered not to show up on Wednesday, according to a statement from the bank cited by the news agency. None of the bank's workers were among the injured or dead, it said.

In addition, a strike had shut a mall housing hundreds of shops on the building's two lowest floors.

The Clean Clothes Campaign, along with trade unions and labour rights organisations in Bangladesh and around the world is calling for immediate action from international brands following the collapse of the Rana Plaza building in Savar, in Dhaka Bangladesh.

It was not immediately clear which retailers were doing business with the factories.

According to Charles Kernaghan, director of the Institute for Global Labour and Human Rights, which has two officers on the ground, the popular US kids chain The Children's Place sources from a factory located in the building. And the website for Ether Tex listed Walmart as one of its buyers, though it is not clear whether the retailer was currently sourcing from the factory.

In a statement, Walmart said that it is investigating whether the factory was currently producing items for the company.

A supplier to UK retailer Primark was also located in the building.

"The company is shocked and deeply saddened by this appalling incident at Savar, near Dhaka, and expresses its condolences to all of those involved," Primark said in a statement.

"Primark has been engaged for several years with NGOs and other retailers to review the Bangladeshi industry's approach to factory standards," it said. "Primark will push for this review to also include building integrity."

The last major building collapse in the country occurred in 2005, when more than 70 people were killed in a garment factory collapse in the same area, according to the national news agency.

A fire at the Tazreen Fashions Factory in another suburb of Dhaka in November killed at least 112 people. Tazreen had made goods for Walmart and Sears, though both companies said they were unaware that the factory had made goods for them.

The country has about 4,500 garment factories where workers make clothes for various international brands. It's on track to surpass China within the next seven years as the largest apparel manufacturer in the world.

"The worse the dangers get, the more business comes in, so the government has no incentive to fix anything," Nova said. "We ask ourselves every day what it's going to take to fix this."