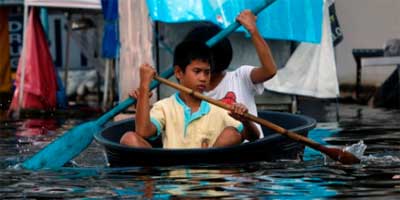 Children row a basin through a flooded street in Nonthaburi province, on the outskirts of Bangkok, Nov. 16, 2011. REUTERS/Chaiwat Subprasom

BANGKOK (AlertNet) - Aid agencies say some of the 300 child deaths caused by floods in Thailand, Cambodia and Vietnam - most from drowning - could have been prevented by raising safety awareness and teaching children to swim.

Simple steps that could stop further casualties in these countries, where drowning is already a major child killer, include swimming lessons, educating families about the dangers of playing in floodwaters, and better understanding of potential disasters.

Fast-moving waters pose a danger even to competent swimmers, let alone children, but not all the recent deaths occurred as a result of strong currents, according to aid agencies.

Despite living near coastlines and lakes, many children in Mekong countries do not know how to swim.

“Children drown, not only because they cannot swim, but also as a result of inadequate supervision and lack of safety measures,” said Denise Shepherd-Johnson, spokesperson for the U.N. Children’s Fund (UNICEF) in Cambodia.

Floodwaters attract children as a place to play, but many know nothing about the dangers of currents and water-borne diseases. In addition, children are often left on their own as their parents try to salvage belongings, aid workers say.

Even when they are with adults in flood-affected areas, many children travel without life jackets, said Caroline Borchard, disaster manager at Plan International in Thailand.

In Vietnam’s Mekong Delta, the death toll of 85 includes 72 children, while under 17s represent more than half of Cambodia’s 250 deaths. Thailand has a far lower number  - 80 out of 533 deaths -  but similar concerns apply.

Statistics show that drowning is a leading cause of death for Asian children, even during normal times.

According to the Alliance for Safe Children, a child drowns every 15 minutes in parts of Asia. It calls drowning “a silent epidemic” because the deaths are rarely reported to hospitals.

Drowning is the second leading cause of injury-related death among children and adolescents in Vietnam after road accidents, killing over 3,500 in 2008 alone, according to UNICEF Vietnam spokesperson Sandra Bisin.

And it is responsible for the highest number of children’s deaths in Thailand, more than road accidents.

“Children living in flood-prone areas should know how to swim,” said Plan’s Borchard. “Swimming classes should be provided in all schools and communities.”

Sana Mot, Save the Children’s programme director in Cambodia, said there is a need to build community resilience to disasters and change people’s mindsets.

“They underestimate and are careless about the floods as they haven’t experienced it since 2000 (in Cambodia), and normally react to the issue rather than prepare for it,” he said.

“We need to educate children and people to better protect themselves from disasters, especially floods which are common for Cambodia.”

UNICEF Vietnam’s Bisin said it could take months for water to recede in the worst-flooded areas. “This, of course, also means a high risk of children dying from water-borne and mosquito-borne diseases,” she said.

Aid agencies say the child-friendly spaces they often run after disasters are important in such circumstances. They provide a place for children to study and play safely, helping them recover a sense of normality when their routines are disrupted, schools flooded and they are living in damaged homes or evacuation centres.

Aslam Perwaiz, programme head for disaster risk management at the Bangkok-based Asian Disaster Preparedness Centre (ADPC), said countries could learn from Vietnam which has made vast improvements in child safety.

It embarked on a five-year programme after historic floods in the Mekong Delta in 2001 killed 642 children.

According to Perwaiz, in An Giang and Dong Thap provinces - where drowning deaths were high – simple, inexpensive but effective swimming nets were used  to teach children how to swim, eliminating the need to build costly swimming pools.

“Emergency kindergartens” were also set up to look after very young children, enabling their parents to seek work.

These innovations worked well, and have been carried on by provincial authorities and private companies, Perwaiz said.

“When there is talk under the broad concept of living with floods, it is mainly about structural stuff like dykes,” he said.

“These issues, which are more social - like how Vietnam has coped with reducing child fatalities – don’t really get reflected. They could be replicated in Thailand and Cambodia and Laos.”