Nepal - Students Learn About Their Rights and Gender Equality 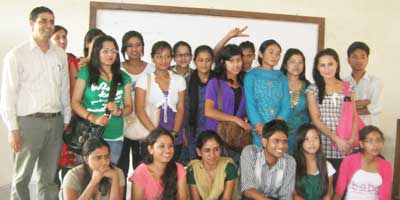 Rural Women’s Network Nepal (RUWON Nepal) is an autonomous non-governmental social organization established in 2007, registered in the district administration office, Sindhuli, in the Federation of Non-governmental Organizations of Nepal, and is affiliated to the social Welfare Council (SWC), Nepal.

The programme was divided into two sectors - schools and colleges. Ten schools and five colleges located in Kathmandu Valley took part in the project.

By forming children's clubs in the participating schools and youth clubs in the colleges, students are given an opportunity to discuss and work with the objectives of the program. The leaders of each club were educated during five days of Training of Trainers (TOT).

We organized five days of trainings of trainers (TOT) in the school level.

We gave the TOT for ten schools in the different school of Kathmandu district. In the training, we focused to gender equality, effect of gender inequality in our traditionally backwards society, and the negative impacts which have played a major role in gender discrimination, in order to develop self esteem, confidence, and positive character.

In the training , the school leaders discussed in the topics which  included gender equality, girl/woman empowerment, democratic culture, violence against children, and children's rights.

We delivered to them the various aspects of leadership and have discussed the benefits of micro saving  –  from a minimum part of income.

Three leaders from each club (president, secretary, and treasurer) of the ten schools took part in the Campaign for Gender Equality and Micro Saving Programme  were trained during five days, 26th - 30th November 2010.

We have been established across five youth clubs in government and community colleges in Kathmandu valley.

In the training , the youth leaders discussed in the topics which  included gender equality, girl/woman empowerment, democratic culture, violence against youth and youth's rights.

RUWON provided training in democratic leadership skills to the leaders of each club to ensure that discussions were guided by peace culture.

Four leaders from each youth club from the five participating colleges were trained during five days, 8th - 12th December 2010.

Members of the children's clubs in schools and youth clubs on campuses published the wall magazine each month, and continue to do so.

It is helping them to be creative in writing skills, and they are getting experience in their writing.

Through this magazine, they have circulated the message of gender equality, leadership, networking, and child/youth rights.

The members of the children's clubs in school and youth clubs in college organized meetings every month.

In the meeting, they discussed  the completed program's weaknesses and strengths parts, and discussed upcoming new programs.

They also talked about  the matter of the wall magazine publishing, and they organized the 'care to share session' about their challenges and opportunity during the  whole month.

The role of the girls and boys in the process of the gender equality, was also a topic of discussion.

Through these kinds of regular meetings, they learned the democratic process, culture, group discussion, and decision making skills.

Some clubs have organized regular program each week, once every two weeks, and at least once a month.

According to the Nepali calendar, every Friday will be a half day for the formal teaching/ learning process.

So, in the three hours' gap period, some schools clubs organize training focusing on class basis, or they organize speaking and writing, practicing in their schools with the board members and general members.

Generally, every club organizes at least one program in a month. It is helping to develop the leadership [skills] among the board members and meeting more opportunity for the general members.

The children's clubs organizes around 11 programmes in a year, although RUWON Nepal supported five programmes –  providing stationery for prize distribution.

In this training, we trained them for leadership, gender awareness, and micro-saving.

We are working with the students from classes 6-9,and  generally, nine class students take the high responsibilities in vital leadership.

When they cross class nine, they should give their responsibilities for new  class   9  students.

According to the Nepali school level calendar, our project ran in two different educational sessions. In the proposal writing period we were thinking to give the refreshment training for the same leaders, but then we gave the trainings for the new clubs leaders at the school levels

We organized the two days' trainings for the college levels leaders on July 7-8, 2011, in Padma Kanya Multiple campus at Bagbazar, Kathmandu.

In the training, the topics included gender awareness and equality, leadership, local resource mobilization, skills to develop the member network with in college and inter- college level and youth rights and development.

Twenty members from different colleges attended the training and they discussed and shared their own ideas and experiences with other members.

And they learned in the above-mentioned topics. During the training, we gave much more priority to youth clubs girls' leaders who actively participated.

Permanent Network in the School Levels

According to  the DKA Austria fund, we should have to work within 10 government schools.

But at the request of one school management committee and headmistress, we included one more school in our project. So now, we have 11 schools in our working location.

RUWON Nepal is working with coordination of the school's extra activities department.

Now, RUWON Nepal gives regular trainings for new members of schools' children's clubs, and schools manage the extra-activities in partnership with the children clubs. Children's clubs are a part of the schools.

Formation of the Inter-school Children Clubs

To make one informative message of working  of each clubs activities, we have formed Inter-school children's clubs (including the main leaders from each  of  the 11 school's children's leaders).

They continue to gather every two months and they discuss the progress of their own school's club's activitie, and share the successful work in the period of those two months.

They organize the regular meeting every two months, which helps them to become familiar with each other's children's club's activities.

RUWON Nepal's leader gives trainings and ideas for the organized meetings, developing the program, and ways to face the challenges with the problems.

RUWON Nepal has started its first tri-monthly magazine publication from beginning of the  new Nepali year.

We convey  the message of the gender equality, leadership, and democratic culture.

Students Now Have Many Skills

RUWON Nepal has been working in the partnership with DKA Austria for the rights of children and youth and gender equality issues in Nepal for one year.

We have implemented many positive changes, and had discussions with the leaders of the children's clubs. Now, students have the skills to organize the meetings and programs at school/college levels.

Students can document the issues, and are able to make a decision through group discussions and can give speeches confidently in front of a mass/group.

They also can give trainings for the new members and motivate them to be active in the clubs programs at the school/college level.

Still, we have to support them: