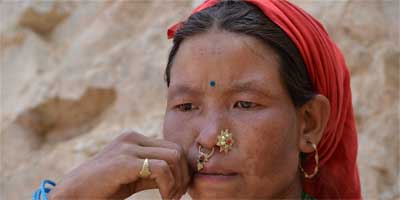 Farmer in western Nepal's Salyan District who was working on a rural road project in a government-funded employment programme | Photo: Phuong Tran/IRIN

Most of Nepal’s agriculture is undertaken by women, but research tailored to their needs is lacking.

“We need new technologies that can reduce the drudgery for them,” said Devendra Gauchan, agricultural economist and chief of the Socioeconomics and Agri-research Policy Division at the Nepal Agricultural Research Council (NARC).

Agriculture supports the livelihood of more than 60 percent of the rural population, but most farmers, regardless of gender, stick to the manual practices that have been common for centuries and seldom use mechanical equipment.

Women have traditionally been involved in agriculture, but the scale and range of their responsibilities has increased. “Feminization has been rapidly enhanced in recent years due to the massive migration… from rural areas, mostly men,” said Gauchan.

Around nine of every 10 people who have left the country, whether permanently or temporarily, are men, according to the most recent census in 2011.

A survey by the UN Food and Agriculture Organization (FAO) in 2010 revealed that some 3 percent of households headed by women used mechanical equipment, compared to 8 percent of those headed by men.

Demands of women and men are different

“The demands of women and men are different, we need to consider that in agriculture research,” said Shreeram Neopane, executive director of local initiatives at Biodiversity, Research and Development, an NGO based in Pokhara, some 200km west of the capital, Kathmandu.

The Institute for Integrated Development Studies, a think-tank in Kathmandu, recently noted that agricultural research and training could cut poverty..

“If it generates and disseminates technologies, which are specifically targeted at the problems of poor farmers, including women farmers, who, because of the gender division of labour, have different technology needs from men.”

Such research should focus on inventing small equipment and machines that would mechanize farming - from sowing to harvesting and post-harvest processing - suggested Dhruva Joshy, former executive director of the NARC.

For example, the traditional way of husking of finger millet, a small staple grain, by pestle and mortar is labour-intensive and time-consuming. A dehusking machine could significantly ease the energy and time this takes, said Bhag Mal, a consultant to the Asia-Pacific Association of Agricultural Research Institutions in Bangkok, Thailand.

Women are often concerned about different aspects of agricultural production, which researchers need to keep in mind, said Neopane. In choosing rice varieties, men care more about increasing yield and production, while women also consider taste, smell and ease of threshing and cooking. Recognizing the needs of women could result in a “higher rate of uptake of a technology, and more benefit from the technology for the family.”

Although women would benefit most from a boost in agriculture research, Gauchan pointed out that few of the country’s researchers are women - only 10 percent of public agriculture researchers in 2009 were women. This is a mere 1 percent increase from 2003, according to the US-based International Food Policy Research Institute and NARC in 2011.

FAO found that 98 percent of Nepal’s total female labour force were engaged in agriculture in 2010,  while the UN Environment Programme noted that women performed six times the agriculture work that men do.

Despite contributing 35 percent to the national gross domestic product, investment in agriculture accounted for just 2 percent of the government’s 2009 budget, with less than 0.2 percent going to research.

Rural women in Nepal are less educated than men, with only about one year of formal schooling each on average, according to a 2010 FAO analysis. The success of any new invention therefore depends on the empowerment of women, and their training and access to information, said Gauchan.

“Even if new technologies arrive, they do not reach many places. Only the smarter women have access, but women living in rural corners do not,” said Radha Nepal, a farmer and chairwoman of the community maize seed production committee in a hilly village in Palpa District, in the southern Terai region bordering India.

“If the knowledge of women were enhanced - if manure, seed and pesticide were made available, with the necessary tools - then women could do all the agriculture work themselves.”