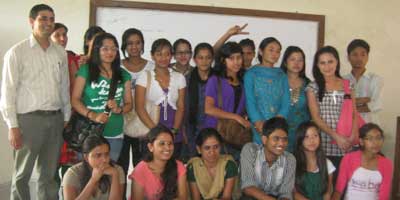 "The main problem is the attitude that women are only materials to decorate the house with, and they can't be outside of the house, in society...."

Sandwiched between India and China, landlocked Nepal is home to more than 30 million people. Emerging from a decade-long civil war, which ran from 1996 to 2006, Nepal is one of the poorest countries in the world, with a per-capita GDP of only $490. Due to foreign aid and a recent tourist influx, the number of people living below the poverty line has decreased, but it still stands at 25 percent. The war cost the lives of more than sixteen thousand people, and the newly-created democracy is still finding its feet, as opposing government sides battle over the constitutional terms.

The civil war also had a structural impact, damaging many of the country’s roads, schools and hospitals.  The current political instability does not allow for comprehensive government spending on services like healthcare, education or employment. This means that, of the children who have access to government education, most struggle with dilapidated buildings, a lack of resources and classes.

As Nepal is a traditional patriarchal society, this instability hits women and girls the hardest. Women’s rights are limited, and more often denied. 80 percent of Nepal’s industry is agricultural, so having land means having a livelihood.

"Recent legal amendments have improved inheritance rights for women in Nepal: daughters, widows and divorced women are now recognised as being rightful inheritors of family and ancestral property, and the discriminatory provisions of the Country Code that forced daughters to return property upon marriage has been amended," says SIGI - Social Institutions and Gender Index on Nepal, that is helping to bring the most current data forward worldwide on gender inequality.

But challenges to the new system still persist. "It is unclear whether the law is being effectively implemented," continues SIGI.

Female education rates are also low: 65 percent of women over twelve years of age are illiterate, compared to only 37 percent of men. This has been linked to the high rate of adolescent marriage, which takes women out of the education system - 32 percent of girls aged between fifteen and nineteen are married, against only 10 percent of boys.

As there are not many ways for women to earn a living, they are perpetually trapped and dependent upon men.

Dhruba Prasad Ghimre is working hard to change that. He is the general secretary and a founding member of Rural Women’s Network Nepal, (RUWON Nepal), an independent NGO set up in 2007.

What is RUWON Nepal and how did it get started?

Rural Women's Network Nepal (RUWON Nepal) is a feminist organisation working for the rights and development of women, children and youths in Nepal. In the beginning, it was started as a community-based organisation and slowly, after five years it has become a national NGO. It is now an established NGO, as well as network based organisation in Nepal. This means that RUWON Nepal is doing the task of networking with other organisations from various districts as an alliance.

How did you get involved with RUWON?

During the starting phase, I helped the other members to meet, discuss women's rights, and together, we started RUWON Nepal. I was one of the founders, and I managed all the documentation for the registration process across the different levels. I became very involved with RUWON while I was working with it in this starting phase.

We started this organisation in eastern part of rural Nepal where women were engaged doing work inside the house. They have very little participation in social, politics, and other decision making, at any level.  They are uneducated and are only engaged in household work. They do not have any type of role in the social and development sectors. There is not only one group of society that is marginalized, but rather there are many marginalized classes within the society.

What programmes does RUWON offer at the moment?

Now, we have programmes with children, youths, and female empowerment. We are very interested in starting up, and developing new projects to develop a gender balanced society.

Why is the education programme particularly important?

For personal or societal change, education is the main tool. In Nepal, there is still a high rate of illiteracy among women, which hinders their personal and social emancipation. So, we focus on women's empowerment through education.

You say on your website that RUWON teaches women new skills they could use to earn a living, can you give me some examples?

Yes, we offer different kinds of training for women, such as; capacity-building training, skill-based training classes, literacy classes, weaving and knitting classes. All these are aimed at developing their livelihood opportunities.

Do you think the women who participate in these programmes gain confidence that they otherwise would not have had?

Sure, they have developed skills and confidence at the same time because in the starting phase of training, they often feel uneasy speaking in front of friends, but after our training they can speak without fear.

What are the key factors in Nepalese society that contribute to the oppression of women?

The lack of education and the high levels of poverty are the main problems.

Does the present instability of the governing forces have any effect on the situation of women, or on RUWON?

Yes, political instability is a major problem for the development of women in our country too. RUWON works in a context where there is no sustainable public system to support women, and this represents a considerable problem. Many different governments have governed Nepal, and time and again, policies have changed and this is due to political instability, which affects not only women's rights organisations, but any type of other organisations too.

What cultural attitudes or traditions lead to the disempowerment of women in Nepal?

The main problem is the attitude that women are only materials to decorate the house with, and they can't be outside of the house, in society.

What are the main problems faced by women?

Does the government recognize any sort of human rights condition in Nepal, or offer any programme to help or finance help from other organisations?

The government does not give funds directly, but it funds programmes that help to empower the women.

Is there anything RUWON would like to do, but doesn’t have the funding for?

We want to start women's helpline and rehabilitation centre for women who have faced domestic violence.

As a man in a patriarchal society, do you ever come up against resistance for trying to empower women?

Sometimes, yes. I do come up against resistance, but I always do my best for the empowerment of women.

How does working with RUWON affect you personally?

I'm a man working for women, and I have been especially involved with RUWON Nepal since its starting phase. So, these days I'm working full-time in RUWON on the networking and empowerment of women. As the result, I'm seeking an ideal future for women.

How do you see the situation of women in an ideal future?

I see most women being involved in field work and independent through their built-up capacities and empowerment. I would like to see the government promoting projects related to women, and the political constitution should be in favour of women.

What future plans does RUWON have?

Our future plan is to run different projects, to support women's economic, political and social development.

What do you think is the key to empowering women?

The first factor is women's empowerment policy with strong governmental support. The policy should focus on spreading education to women and provide trainings. To sum up; education, leadership development, economic empowerment and capacity development are important.

What exactly is "capacity-building training"?

We do capacity-building training in the empowerment project. We do this by giving training on leadership, empowerment, democracy and gender equality.

Do you have any stories about the women who work for RUWON who serve as an inspiration for others?

Yes! Mrs. Bandana Kumari Shrestha joined RUWON Nepal as a volunteer, then she became a staff member, and now she is the president of RUWON Nepal. She always inspires women to be empowered, and to build their capacity, and leadership skills.

What about women that RUWON has helped, any case that moved you the most or were the most memorable?

48 years old Bhagbati Nepal, was completely illiterate. She couldn’t even speak properly before attending the class. By the end of the class, she is able to read, write, and speak smoothly. She can now present a speech in front of a crowd.