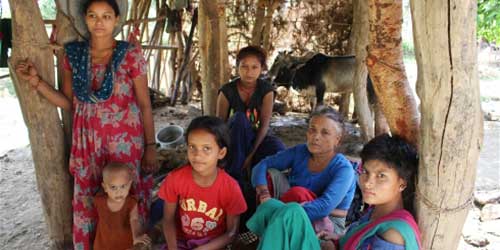 At age 33, Rami Biswokarma has been married for 20 years. Her village of Kateghari in Nepal’s western Surkhet District has seen multiple campaigns against child marriage, but she says little has changed

At age 33, Rami Biswokarma has been married for 20 years. Her village of Kateghari in Nepal’s western Surkhet District has seen multiple campaigns against child marriage, but she says little has changed.

“Only the age of brides has increased from 12 to 16 years old now,” Biswokarma told IRIN.

A subsistence farmer, Biswokarma is illiterate and has five teenage daughters and a 20-year-old son. She is also a Dalit, the lowest rung of the Hindu caste system. And while laws against, and outreach campaigns about, child marriage have a long history in Nepal, national data show that child marriages are particularly common among Dalits - something experts attribute to persistent poverty and illiteracy among this historically marginalized population.

Nepal outlawed child marriages like Biswokarma’s in 1963 (and subsequently outlawed caste discrimination in 1991). Aid agencies and NGOs have run extensive shaming campaigns to end the practice. However, experts say, such tactics have missed their target, and fresh attempts to tackle poverty and discrimination to end Nepal’s child marriage scourge are needed.

Tikaram Acharya, director of the Social Awareness Centre (SAC), an NGO based in Surkhet, argued: “The Dalits’ hardship is due to extreme poverty and high illiteracy rates contribute to child marriage in the Dalit community and unless that changes, we will never eliminate this problem.”

SAC runs community programmes - including door-to-door lessons about legal and health implications of early marriage - in an attempt to curb underage marriages in Surkhet District, which has one of the highest numbers of child marriages of Nepal’s 75 districts, according to the 2011 National Population and Housing Census.

According to the 2011 census, more than 750,000 women in Nepal today were married between 10 and 14 years of age. More than half of girls/women between 15 and 19 (2.7 million out of 4.3 million) reported they were married, meaning more than 73 percent of girls are married by the time they turn 19 (both the census and UNICEF use age 19 as a cut-off point, technically overlapping with adulthood).

But child marriage was particularly prominent in the Dalit community, according to 2012 report published by Save the Children, World Vision, and Plan, and targeted aid interventions among Dalits are needed to reverse this troubling trend, experts say.

“Studies have shown that young married girls often suffer from sexual and domestic violence, risk their health, and their future opportunities are totally non-existent,” explained Ola Perczynska, Nepal’s programme manager of Her Turn, an international NGO based in Kathmandu.

According to the 2012 joint report, girls who marry young suffer from pregnancy-related complications, uterine prolapse, infant and maternal mortality, malnutrition of both mother and child as well as psychological problems, including depression, violent marital relations and suicides.

"When a young under-aged bride gets pregnant, the chances of dying during childbirth is five times [higher] than in their twenties, and this is one key reason why we need to push for delaying their age of marriage," UN Population Fund (UNFPA) Nepal representative Guilia Vallese told IRIN.

According to the Nepal Human Development Report 2014, Dalits make up 13 percent of Nepal’s 27.4 million population, and 43.6 percent of Dalits are extremely poor, surviving on less than US$1 per day. Forty-eight percent are illiterate.

“The low human development index and worst social indicators among Dalits need to improve, and unless that happens, eliminating child marriage will be a very difficult task,” said rights activist Tanka Biswakarma, vice-president of the NGO Dalit Welfare Organization.

Others point to poverty at home as a reason driving young girls into marriages, as a means of escape. Teachers in Surkhet told IRIN they often witness their students getting married.

“We constantly worry about students from Dalit families getting married every year reaching 15 years old,” said Bal Bahadur Thapa, school principal of Nepal Rastriya Secondary School in Kateghari village. More than six girl students out of the 100 in his school have got married in the last two years, he said.

“Simply threatening families and priests with laws doesn’t seem to be enough. There is a need for a holistic approach that integrates social, economic and health in one programme”

“We have been very active in preventing child marriages in the temples by threatening the parents and priests and taking the help of police,” said CWB’s child rights officer Mahesh Nepali in Banke District, 500km southwest of Kathmandu, explaining that communities, students, and local government officials regularly threatened with legal action priests and families attempting to marry their children.

“But simply threatening with legal action is not enough,” he explained, adding that enforcement of the law has been piecemeal and some families hold clandestine ceremonies to evade the law.

Pointing to poverty as a principal driver of child marriage, experts argue more needs to be done to support Dalit families.

“A whole new system has to be created in which every key stakeholder has to be accountable,” said Kirti Thapa, a child protection specialist at Save the Children (SCF), a Nepali NGO.

Thapa explained that child marriage should no longer be just an issue of protection but must be integrated into humanitarian and economic interventions for the poorest communities, especially Dalits.

A coalition including SCF, Care, Girls not Brides, the UN Children’s Fund (UNICEF) and the UN Population Fund (UNFPA) have been working with the government to develop a new national strategy exclusively focused on child marriage, officials told IRIN.

“The national strategy to end child marriage should have impact not just at the policy level but also bring a change in the overall system of government and at the grassroots community level, bringing a change in people's beliefs and social norms," said Nafisa Binte Shafique, chief of UNICEF-Nepal’s Adolescent Development and Participation Section.

UNICEF is also working on in-depth research to map out the hotspot areas of child marriage and identify the most vulnerable communities across the country, said Shafique.

The Ministry of Women, Children and Social Welfare is taking the lead in framing the strategy - which is due to be completed by the end of 2014 - and ministry officials are already calling it a “major breakthrough” as it will be the first national policy to proactively address child marriage.

“Simply threatening families and priests with laws doesn’t seem to be enough. There is a need for a holistic approach that integrates social, economic and health in one programme,” explained Kiran Rupakhetee, the ministry’s chief of child protection.

The strategy aims to increase access to humanitarian services, including reproductive health, economic aid to the poorest families, food security and family planning, in addition to continuing current awareness campaigns.