Dancing for Rain: The Women of Nepal 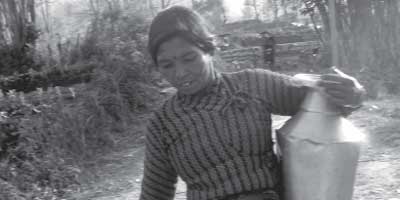 The Women of Nepal

A small landlocked country in South Asia, Nepal has been prone to several climatic disasters such as flooding, landslides, hailstorms and droughts, that only aggravate hunger and poverty in the countryside.

Having a lot at stake with the limited land and water resources that they can access, many women have tirelessly danced to the gods for rain and trekked dangerous cliffs if only to coax the disoriented soil to sustain them and their families again.

According to the United Nations Human Development Index, Nepal ranks 145th out of 177 countries, with 35 per cent of the population living under US$1 a day. Eighty per cent of Nepal’s population are in rural areas.

As they heavily rely on agriculture and forest resources, they are immediately affected by the climatic disasters. Women, who are primarily responsible in providing food and water for the family are indeed the hardest hit.

Among climatic disasters, the droughts of 2006, 2008 and 2009 left the deepest imprint among Nepal’s rural poor.

During these times, villagers performed various religious rituals with the hope of correcting the unusual weather patterns.

Marriage of the Frogs

Some villagers organised ceremonies such as the marriage of frogs in the Hindu temple.

The newly wed frogs are carried to the nearby stream, expected that they would communicate to the god of rain the locals’ plight due to the drought.

The frogs’ croaking heralds the arrival of the monsoon.

The community also pleased the god of the snakes, to whom the first rain of the year is attributed. The backbreaking tasks demanded by the ceremonies such as preparing the households, cooking food, hosting people and cleaning up are done by women.

Moreover, women dance naked to please the god of rain, exhorting him to bring rainshowers for their crops.

It is important to note that there are no equivalent rituals required from men.

The women are responsible

Religious guilt over the absence of provisions rests squarely on women.

Thus, women’s anxiety is twice as much as that of men during uncertain times.

While I was conducting research in the villages of Kavre in July this year, the minimal rainfall in a monsoon season was noticeable. Although Kavre was not one of the districts that were severely affected by the drought, its rice planting was delayed.

Nonetheless, a rainfall at anytime was considered a blessing, reinforcing their faith that their plight was about to end. The road going to the village around the hill was steep. With rainfall, it became muddy and slippery.

As I walked, I realised how difficult it must be for women to pass through this path with water jugs on their heads and shoulders. Once, a rural woman shared how dangerous it is for women to fetch and carry water during pregnancy.

But since the provision of water and firewood for the household is a task that has been traditionally performed by women, women trek cliffs and slippery roads even when they are sick. Hence when forest resources disappear because of climate change, the path becomes steeper and farther and the task more burdensome. When I reached Kavre, the women were no longer there.

Waiting for the Rain

I would find out from their neighbours that they went to the ricefields.

While they were planting, one of them told me, “We are sorry that we could not wait for you even for a minute. We cannot have this miracle everyday. It rained after a long time and we have to grab this chance on time or else we will not be able to plant this year and our children will have to starve again.”

These women waited day and night for the rain.

Some even started working at night, when the showers poured. While their husbands, children and the relatives are sleeping, the women, mostly daughters in law, were awake, straining their ears to catch the first landfall of rain.

As soon as they heard the rain drops, they ventured out to work the land.

While agricultural work in Nepal is performed by both women and men, it has a gender division of labour.

Whereas women’s roles consist of planting, transplanting, weeding, harvesting, milling as well as the collection of water, firewood and fodder, men plough the fields and market the extra crops for additional income. In the past, men tilled the land with the use of bulls.

Now, new technologies such as tractors have made their tasks easier. Although women’s work may not seem as physically demanding, it is time consuming and wearisome.

The women I encountered were mostly of lower caste.

Thus they have lower income and less access to education. Nonetheless, they have been targeted by entrepreneurship development projects with goals of reducing poverty and food insecurity in their households.

But these women barely have enough land to plant their crops.

Moreover, their produce is often inadequate to feed their own families.

Some women would even eat less in order to provide for their children.

One woman shared, “If our children can eat a little more and can have good health then there is no harm that we eat less, especially in times of drought when we are facing food shortage. After all, they need more nutrition than us.”

Women cannot totally rely on entrepreneurship given that their businesses are seasonal.

Their income is not enough to insulate them from rising food prices. For these women, security primarily comes from the predictability of the elements like the sun and the rain.

Their land could only be their lifeblood.

Once this is threatened by droughts and other climactic disasters, their lives hang on the balance.

Sabrina Regmi received her Master’s Degree in Sociology from the University of the Philippines in Diliman. She conducted a series of research in Nepal on gender and development, particularly the relationship between microcredit and women’s empowerment. She also studied gender and climate change in Japanese women’s roles in climate change mitigation.

ISIS International: Dancing for Rain - Droughts for Women in Nepal