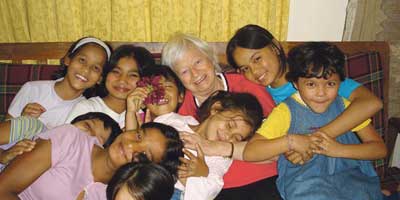 86 year old Olga Murray is a legend in Nepal. For the last 20 years her nonprofit organisation, Nepal Youth Foundation, has worked with impoverished children in Nepal to  provide education, housing, medical care, and human rights. Nepal Youth Foundation's Indentured Daughters Program rescues girls from being sold as bonded servants and pays for them to attend school.

The Federal Democratic Republic of Nepal is situated in the Himalayas in southern Asia between India and China. Nepal has a flourishing tourism industry but most of the population depends on agriculture. Nepal is also one of the world’s poorest countries and the UN estimates that about 40% of the population live in poverty. Nepal relies heavily on trade with neighbouring India and foreign aid is vital to the economy.

Various forms of forced labour and bondsman systems existed through the history of Nepal, in particular the Kamlari, girls and young women sold by parents into indentured servitude. Although this form of forced labour was outlawed by the Nepalese government in 2000, the system still persists despite of it. 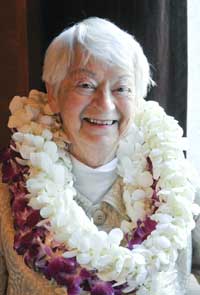 Please start by telling us about yourself and your career. There were very few women lawyers during your time so what made you choose to study law?

I loved to write and to argue and I'm always chafed at injustices, so I figured that even though at that time a career in law was unsuitable for a woman, I would be a lawyer.

My entire career was spent at the California Supreme Court and it was my first and only interview out of law school. I worked with the Chief Justice Phil Gibson for 9 years and his successor Stanley Mosk for 25 years until my retirement. My role was to research cases coming before the high court, draft and write opinions as to the outcomes, and in my last years I worked on civil cases on the environment, civil rights and women’s rights.

Heard that The Dalai Lama presented you with the Unsung Heroes of Compassion Award in 2001 in recognition of your work, what was it like meeting him?

Yes! Me and 49 others met him and it was a wonderful experience. He was inspiring, funny and very engaging.

When was your first visit to Nepal and your impression of it?

I first visited Nepal in 1984 on a trekking expedition into the mountains and fell in love with it the moment I stepped out of the plane. It was a joy to know the smiling people and beautiful children but most of all, to see the happiness in spite of the poverty. There was a burning desire amongst the children to want to go to school and to learn and this left a deep impression in me, so I decided that this is what I would dedicate my life to.

Tell us about the Nepal Youth Foundation.

The foundation was founded in 1990 and it is a registered non-profit organisation based in the U.S. and in Nepal. It was started in order to officially render the work we were doing in Nepal and also to enable us to solicit tax deductible donations. The focus is to help disadvantaged children by providing education, health care and shelter. We have also established 13 small hospitals and 2 children’s homes to facilitate our work and so far we have been able to help over 11,000 girls who were trapped in slavery and indentured servitude, a practice called 'Kamlari'.

Give us a history and background on the Kamlari system and how it started.

The ‘Bonded Girl’ or Kamlari custom started after the landowning ethnic minority Tharu had their lands taken over by other Nepalese, following the Eradication of Malaria in the 1950s. Following the takeover, the traditionally landowning Tharu farmers became tenants on their own land. They had to work for a portion of the crop and became indebted through borrowing of money from their employers for basic needs like medical care and clothing. These farmers were bound to the land until the debts were paid but most were unable to pay off the huge debt accumulated over the years. Sons became responsible for the debts of their fathers, a never ending cycle. Whenever a landowner needed a servant, the wife or daughter was sent to work at the landowner’s home without getting paid.

In 2000, the Nepalese government outlawed the practise of  KamaIya, the bonding of farmers, and cancelled all debts incurred by the farmers. But because of this the Tharu people were evicted from the land they had traditionally owned for centuries and lost everything. They began selling their daughters as labour. This became common practise in the Tharu culture and was accepted in the community because often the mothers of these children were bonded slaves themselves so were they fathers.

The agreement to send daughters, some as young as 6 or 7 years old, into servitude is made between the father and a middle-man and recruitment takes place during the festive season. The agreed contract usually lasts for 1 year but most times, this contract is renewed yearly or the girls are sold on to another employer. 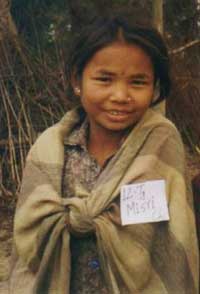 For SaleWho are these girls sold to? And what are their primary roles in their employers’ home?

The girls are sold to middle or upper class families in the cities and rural ares.

At times money does not change hands at all because the family is relived from the burden of feeding the child.

If the employer allows the child to return home for the annual festivity, she will see her parents but often it is years before she meets the family again.

They are usually domestic helpers but if they are working in a small town or in rural areas, they perform the usual tasks of Nepalese children like gathering fodder, firewood etc.

We have rescued girls who are 17 years old, sold when they were 6 years old, and returned them to their families, although in some cases the families are too poor to support them so the girls will be housed in hostels and provided with an education. We have supported their education through high school and if they are older, vocational training was provided.

How rampant is this form of employment in Nepal?

It exists only in the Tharu community. In 2000 we estimated that there were about 20,000 bonded children. And today due largely to our efforts and continuous work the number has fallen to one or two thousand.

According to the law in Nepal, it is illegal to employ a child under the age of 14 and we have brought the case to the supreme court and won the verdict. This resulted in explicitly outlawing the practice and ordering the government to be involved in the process of rehabilitating the liberated girls. If an employer chooses not to release a Kamlari, we will file a report with the police or raise it in the local court.

What are the key cause factors to this form of selling of children?

It is a combination of poverty, lack of opportunity, a feudal mindset of the middle-classes and the fact that indentured servitude is an established custom amongst the Tharu people. The girls are sold for different sums $50, $70 or slightly more and some for almost nothing at all like a few sacks of rice.

Are these children vulnerable to abuse?

Yes, they are frequently abused physically and sexually. Few are ever free of beatings and abuse. There have been cases of unwanted pregnancies due to rape. Personally I do not know of illnesses caused by neglect and the lack of care, but it would not surprise me at all.

Are parents aware that the children may be vulnerable to abuse and violation? Have there been efforts made through educational and awareness programmes?

The employers usually promise parents that the children would treated well and attend school but very few ever do. Since 2000, Nepal Youth Foundation established a major awareness programme in all 6 districts where Kamlari is being practised. The objective is to inform families of the suffering of these girls through street plays, a radio programme, posters and leaflets, demonstrations and social clubs in villages. And the results have been very positive.

When we first started work in West Nepal, parents were proud to sell their daughters and today as a direct result through the awareness campaigns and programmes, the communities have started to voice their disapproval towards the practice. The success is largely due to the participation and activities generated by the liberated girls themselves. Not only have they been actively taking part in the activities, they have taken an active role in working closely with the local authorities. They have also started an NGO to help fight the practice of Kamlari through rescue work too.

Their energy, enthusiasm and dedication have been the secret to our success at Nepal Youth Foundation. Plans have been made for these girls to take over the running of the awareness programmes from us in a couple of years.

What is the Nepalese government's attitude towards this? Do they recognise it as a human rights issue that needs addressing, actively seeking ways to help these children and working towards eradicating this form of exploitation? Are there child protection policies in placed?

The government has taken a more active role in trying to eradicate the practice which has now been recognised as a human rights violation. The local police has also started enforcing the law when a complaint is filed. As of 2009, the government has also been paying for liberated girls to attend school or vocational training.

There are international agreements to which Nepal is a party to and the agreements forbid the practice of Kamlari but they lack enforcement.

And why is the law not being enforced?

Nepal has about a million child labourers within the country.

The law against child labour, including other laws to protect children and women are not enforced because the government lacks will or the ability to do so. Many children do not attend school and, if they do, the schools are pitiably dilapidated and poorly run. The lack of adequate health care for children is also an issue, especially in the rural ares.

The government simply does not exercise its authority in making it a priority to protect children from exploitation and this could be due partly to insufficient resources.

Children who have been abused by their employers: were the cases ever reported to the police? If yes, has anyone been prosecuted?

Yes, now that the horrors of the Kamlari practice has been made more publicly, and also recently through the efforts of the NGO founded by the liberated girls, they succeeded in sending an employer to prison for raping his bonded servant. A first for this to happen.

The work you do - how does it affect you as a woman?

I am very proud of these girls.

They are courageous, smart and passionate about eradicating this inhumane practice. Looking at them and their achievements, my hopes are raised about the perfectibility of humanity. 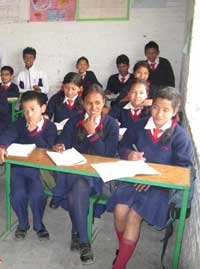 What do you hope to achieve through the work you do with Nepal Youth Foundation?

To continue to help improve the lives of as many children in Nepal as possible.

And hopefully to set an example to others faced with the same challenges while working with children in other countries who have been bonded away.

But more importantly to be able to see the children we have helped raised giving back to their society.

What can people do to help these children?

Be alert to the abuse of children in your own community and do what you can to be involved and to try and stop it. And you can help to stop it.

By instilling in your own children an identification with other children less fortunate than themselves so that they too will have a desire to want to help others.