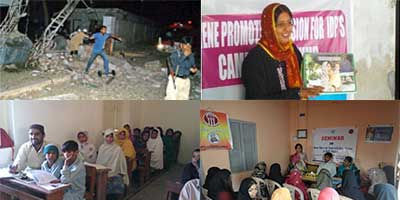 City of Sukkur along with Secularism of Sindh is Under Attack…

"The ICEF staff heard the sounds of explosions and hurried to help the injured and answered an appeal for blood donations."

On the 24th July 2013, a bomb attack struck the city of Sukkur, in the Sindh province of Pakistan.  Sukkur is the base for Safe World Field Partner,  Indus Community Empowerment Foundation (ICEF).
Zubair Ahmed Laghari writes:

The news about the attacks on the city of Sukkur Sindh Pakistan on 24th of July, during the Holy month of Ramadan and at the time of aftari (ending time of fast) was terrible.  The attacks, which were aimed at the head office of the Pakistan security agency, left behind so many killed and many more injured. It is, however, everyone in Sindh who suffered.

The bombs occurred in the intervention area of ICEF and very close to the Sukkur regional office. The ICEF staff heard the sounds of explosions and hurried to help the injured and answered an appeal for blood donations.

It is important to understand why it is so shocking for us.

History of Sindh - A Peaceful Civilization

Sindh province is well known to the world for its ancient history.  5,000 years ago, the Indus Valley civilization flourished on banks of the river Sindhu (Indus), and was where the great city of Moen-Jo-Daro existed.
The people of the city developed a role model of civil engineering, creating a drainage system long before the cities like London and elsewhere.
There was a water supply system and swimming pools. The streets of the city were well planned. And a total concept of well fare state system existed.
Most importantly archeologists and researchers have found no evidence of any kind of weapon to kill.

Sindh is a peaceful place known for its Sufi saints like Shah Abdul Latif and Sachal Saami who preached secularism and humanity.  The great Sufi Shah Inayat gave the concept of “Jo Kherre So Khae” (However sow the seed thou shall reap) setting a communal system many years ago, long before the idea had been thought  of in other countries.

The bomb attack in Sukkur, and those which occur on a daily basis in the Metropolitan city Karachi, spread untold suffering and misery.  They create panic and a change in human behavior too.

Many business people are leaving the country and creating a gap in business society.

But, for the majority of people in Sindh, there is nowhere to go and nothing to do except face the situation.

The attacks have a catastrophic psychological effect on our minds; some of us feel unsafe and afraid to go out.  Simply everyone is feeling harassed.

Working to Empower the Poor and Vulnerable

Here at ICEF we try to help. Our NGO works to empower the poor and vulnerable though girls education, through women’s education and awareness.

We engage our youth through trainings and workshops. We are working to support rural women sell handmade items in local markets.

But still much more is needed.