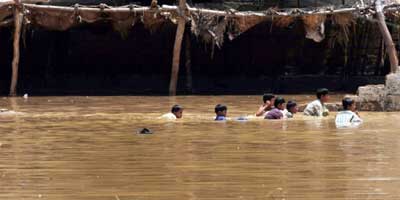 Heavy monsoon rains, across the country, have increased the flow and level of Indus water; therefore hundreds of villages located in riverbed areas of Sindh province have come under water.

The high water level, at the Katcha area, has made normal daily life extremely difficult for thousands of inhabitants.  The gushing Indus water has destroyed the mud houses, personal belongings, crops and livestock.

Government departments, non-governmental organizations and international relief agencies have established flood relief camps; additionally, they are also providing food and healthcare facilities to the flood affected population.  It is really commendable that relief providers are trying to coordinate with each other to provide required facilities to the flood affectees.

Abdul Jabbar Bhatti, Executive Director of Hyderabad based Institute for Social Change, remarked that, “These people are hit really very badly and their financial loses are enormous.  Undoubtedly, normal life is also affected due to flood situation, which have become a regular phenomenon in recent years in the province.”   He added that his organization is also trying to provide comfort to the flood affected population.

Since 2010, different parts of Pakistan have been experiencing heavy monsoon rains and subsequent floods, causing huge financial loses to the national exchequer and ordinary citizens of the country.  Besides, financial loses these disasters have adverse impact on the well-being, protection, and development of local children.

In recent floods when many inhabitants of the Katcha area where concerned about the safety of their valuables and livestock; I met with Hussain Buksh, who is only seven.   The little boy was really very worried as he had lost his school bag during the emergency evacuation.   He said that, “My father bought copies and books for me and I had promised that I will keep them clean till the end of my final examination.”  Hussain Buksh was not sure either his father will be able to buy new school bag for him or not, after returning back to his house.

In a research conducted by the Hyderabad based Institute for Social Change, it was revealed that the vulnerability of children has been increased, in manifold, during the time of disasters.  The research further added that insecurity, violence and exploitation are among the list of issues faced by the children during such situations.

Freha Nisar is a psychologist; she used to work in relief camps in Sindh in 2011, informed that, “It was really hard for poor parents, especially fathers, to keep themselves under control.  Due to highly stressful atmosphere, in post disaster situations, many parents had beaten their children severely, even without any mistake.”

I met with a number of children, who spent time in flood relief camps in 2010 and 2011.  Most of the children complained that their father had opted to rest and stay in their camps while they have to collect food or other daily usage items.

Some children also received injuries during their effort to collect as much food and other items for their family members. Humayon, an NGO staff member, used to work in relief camps also mentioned that in some cases parents sent their children to work outside the relief camps.

Children remain the most vulnerable part of any society and are always in need of a safe, healthy, and joyous childhood for a purposeful life ahead. Rampant poverty, illiteracy, and cultural norms often push children towards delinquency and violence. Disasters, natural or manmade increase the risks for children, as even otherwise caring parents are often forced to expose children to all kinds of vulnerabilities.

While a lot of focus remains on provision of food, clothing, health and shelter, not enough attention is given to education for children, which receives serious interruption in post disaster situations. Therefore, informal schooling systems should be encouraged for the continuity of education for children living in disaster affected areas.

Amir Murtaza is a senior researcher, analyst and writer on social development issues, especially pertaining to women, youth and children.

He can be reacheed at