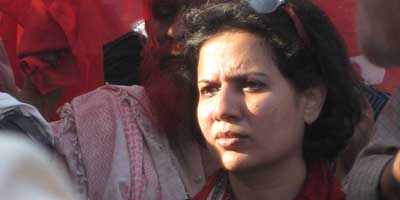 Pakistani activists view the student that was shot by the Taliban as a symbol of courage and an icon for the defense of education and of women. Islamic extremists impose sexist and oppressive politics in the northwest of the country.

Swat District, Khyber Pakhtunkhwa Province, northwest of Pakistan.  In 2010, around 1,000 schools were shut down, and 120,000 girls were forced to abandon classes. Between 2001 and 2009, 401 teaching institutions were destroyed by Taliban militants.

In one of the two most dangerous regions in the world for women, the strength of a young student challenged the tyranny and the blind fanaticism of a misinterpreted Islam. At 16 years old, Malala Yousafzai. a Pakistani girl shot in the head by a Taliban extremist, while returning from school, turned into an international celebrity and was close to winning a Nobel Peace Prize.

Pakistani activists confirm that the adolescent represents a symbol of hope in a country where many women are hostages of a dominating patriarchal society and of a mixture of local traditions with Islamic dogmas.

"The Taliban attacks women in defense of human rights, in addition to campaign workers of the vaccination against polio.

The militants' discourse and ideology are much more dangerous than the militants themselves, because they're widely accepted by people and that has created a favorable environment for the Taliban."

Gulalai Ismail, founder of the NGO Aware Girls, based in Khyber Pakhtunkhwa and in Peshawar.

"Malala is a mission, an ideology, a symbol of bravery. She can become the voice of human rights around the world. Through the window of education, Malala will strengthen the movement in defence of girls," admits Gualalai Ismail, founder of the NGO Aware Girls, which fights to establish a platform of leadership between the girls of Khyber Pakhtunkhwa.

She accuses the Taliban of prohibiting female education and oppressing women's movements.

"They don't have permission to have a job, and many families are forced to wed young girls as soon as possible," she comments.

According to Gualalai, the Taliban recognizes the fact that education enables women to think like humans and to follow a career path.

"The Taliban wants us to be men's property. They think our empowerment is the destruction of society. They're afraid of enlightened and courageous women."

"In the version of Islam followed by the Taliban, the education of women means to enlighten them enough to question their oppression and to demand freedom. The militants dominate at least half of the population and they don't want to lose that control.

In Pakistan, 85% of women have been victims of marital violence."

Karachi activist Andaleeb Rizvi acknowledges that Malala was one of the youngest to stand up for female rights.

However, she warns that much is needed to be done so that Pakistan can be transformed into a safe nation for women.

"In rural areas, there are archaic customs, like the karo-kari, where a woman that chooses a man to wed is killed; and the swara/vani, in which a child is offered in marriage as compensation for a blood feud," she explains.

On the other hand, Syed Mahmood Kazmi, a blogger for Safe World for Women, tells devastating stories involving the Taliban.

"It's acid attacks, rapes committed by gangs and honor killings. There are cases of female babies thrown into rivers and women buried alive," says the activist, based in the Pakistani Kashmir. Kazmi retells that the Taliban wants to impose a hateful agenda.

"In Khyber Pakhtunkhwa and in the Federally Administered Tribal Areas (FATA), the extremists prevent women from leaving the home or participating in daily activities."

"The Taliban is the name of an ambiguous way of thinking, which wants to dominate Pakistan and Afghanistan, according to it's own interpretation of Islam and it's dogmatic beliefs.

Based on it's philosophy, women have nothing to do with education.

That's why the militants prevent girls from becoming educated."

According to Kazmi, the Taliban usually threatens parents to prohibit their daughters to study, bomb girls' schools, and kidnap teachers.

"The militants believe that, if women are educated, they will demand their rights. Entire generations will be oriented and will go against the Taliban's principles," says the volunteer.

A journalist and professor at the University of Punjab, in Lahore, Dr Hasan Askari-Rizvi believes that Malala, of Pashtun ethnicity, represents a challenge in the fundamentalist movement.

"She is a symbol of courage and turned into a role model for girls that insist on receiving an education. The Taliban follows a written interpretation of Islam, associated with old tribal traditions that oppresses the part of women. In a society dominated by men, their rights are violated in rural areas, where the traditional culture is strong. Sometimes, the nation is incapable of protecting them," Askari-Rizvi observes.

"Pakistan is the third most dangerous country for women, where around 80%-90% of them have suffered domestic violence.

We are taught to not shame our family, to dress a certain way and to marry a man chosen by our parents."

For Hera Hussain, the founder of the site Chayn.org, what Malala conquered in this movement is something without predecessors.

"In Pakistan, the activists are more distant from the influential positions in society.

This was emphasised by the case of Mulhtara Mai, a villager who was raped, after a tribal judgement, as a sentence for a crime committed by her younger brother," she recalls.

"Now, Malala has redefined what a Pakistani girl can accomplish. Female students from cities and villages are inspired by her.

She has shown great courage in the face of an enormous adversity," the activist admits.

Malala Yousafzai was greeted by Barack Obama, Michelle and Malia, at the White House. The First Couple of the United States thanked her for "her inspiring and passionate work" towards the education of young girls, and highlighted the importance of access to learning.

The First Lady said, “Investing in the education of girls' is the best thing we can do, not only for our daughters and granddaughters, but for our families, communities and countries," the White House declared.

Malala admitted she was worried about the drone attacks (unmanned aerial vehicles).

Alliance for a Safe World

Aware Girls and CHAYN are members of the Alliance for a Safe World.

Aware Girls and CHAYN are members of the Alliance for a Safe World.