Inspiring Girls through Education, Amidst Fears of Insecurity in Sindh 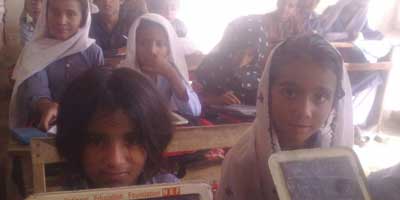 "We believe that each and every religion has taught about peace, harmony, and humanity."

Major events have occurred recently, in our part of the country, which we believe have affected the general mentality of our society and have also affected our work.

One is a series of bomb attacks by extremists in our country that has created insecurity in the thinking of people and has caused fears in the minds of the masses; due to this, they are afraid to come out from their homes.

Mistrust and Intolerance in the 'Land of Religious Harmony'

The second event is basically political, but has had even greater impact and has shook the roots of Sindh’s Sufi culture: that is, religious intolerance in the province of Sindh, which is basically thought to be land of religious harmony.

Moreover, increasing extremism and frustrating conditions of society has increased the frustration in people.

The case of Bhoro Bheel was basically the social frustration of people and that anger broke out in such a way that people dug out the buried body of Bhooro Bheel from his grave and disrespected his body. People were exploited in the name of religion, whereas we believe that each and every religion has taught about peace, harmony, and humanity.

The case has broken the bonds of all religions between each other, for they all have lived in peace for centuries – at least in Sindh.

On the 27th September, 2013, ICEF (Indus Community Empowerment Foundation) organised a condolence event, along with a walk, at the press club of Sukkur against the brutal killing of Sahib Khatoon Mirani, a social worker from Ghokti, Sindh province.

She was brutally killed by her ex-husband because of her active participation in the development sector for women rights and for condemning the brutal bomb attack on the Christian church on 22nd September 2013 in Peshawar, Pakistan which left 78 dead and injuries to more than 100 innocent people in the Christian community.

ICEF is focused on education and women rights. During the last three months, ICEF has played a role as the source of inspiration for rural girls, where girl’s education is a taboo and education facilities are very scarce.

Our case studies clearly describe how we are motivating the rural communities and poor girls for education: we believe that providing education facilities to the vulnerable communities and to the children who have never thought about schooling is a big achievement of our organisation.

We have also been organising seminars, walks, and awareness programs through which we are narrowing the gap between youth and the information age of present scenario of the world.

These achievements have raised the confidence level of our organisation, and we believe that we are ray of hope for poor people of the society and we have to show our responsibility towards the well-being of our society.

Our results and target-oriented achievements have risen the confidence of people in our organisation and with their help, now we can motivate them easily, which would have been difficult before our achievements.

ICEF is especially working on the education of vulnerable communities in remote areas where the basic needs of the masses are great.

Here we are sharing a story of a child girl named Sawera; she belongs to a begging family her family begs at Dargah (Shrine) of Peer Koko. ICEF has established a school called Al-Maryam Model School about 2 km distance from Shrine of Peer Koko, where she lives and earns money by begging at the shrine.

Sawera was motivated by the mobilization team of ICEF and she travels 2 km towards school in her search of daily education.

“I love to be here and I am very much pleased with the atmosphere of our school which is created with the help of ICEF, whereas our families are not willingly allowing us to seek an education, but I have been inspired by ICEF – seven.. eight more girls for education, and now they are accompanying me to school”.

We at ICEF believe that it is great success of ours that we are inspiring and creating role models at grassroot level.

Jalal is a disabled child; although he was very much interested in seeking an education, his parents and the whole community discouraged him from education by saying,

“What would you do with education whereas you can’t move easily?”

However, his own interest in getting an education brought him to school. He uses a wheelchair for covering the distance of one and half kilometers to and from school, for seeking his education at the education facility provided by ICEF.

“ICEF has given me the atmosphere which I wished. I am happy that here, no one discriminate on the basis of disability, and we have learning atmosphere here”.

Sajid is aged about 9 years. He belongs to a poor family of village Sachal Maitlo, and their family earning comes from a retail shop where he – with his family, work for the day and earn a living.

After his keen interest in education was noticed, his father was approached by ICEF's team and was mobilized to allow his son for admission at Al-Maryam Model school. Sajid says,

“I am happy that now I am learning to calculate the routine calculations of my shop; my father says that it was 'a good decision to allow you for education'”. 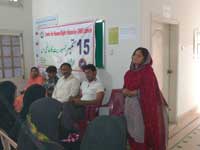 Along with these case studies of education-seeking children, ICEF has also organised walks, seminars, and workshops – mostly on education and women rights.

On the 15th September, 2013, ICEF organised a seminar with collaboration of Nari Foundation regarding the celebrations of World Democracy Day for awareness of youth for democracy at Sukkur.