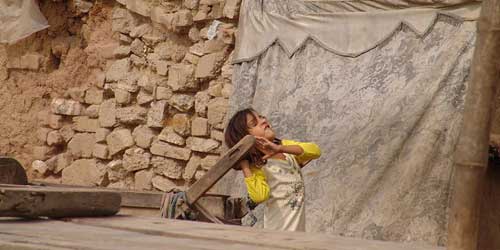 Son Preference and Neglect of Girls

Neglect and discrimination on the basis of gender has been quite common in traditional societies. Such phenomenon is present in all classes of the society and exhibits in several forms.

According to Dictionary Online:

Son preference is a form of gender based discrimination which is a well-recognized fact that has existed in all parts of the globe. It is indeed a grim reality that in some countries, societies and communities the phenomenon is so strong that it has resulted in gender imbalance and girls neglect.'

The phenomenon is especially quite evident in South and East Asian countries where one can see more boys than girls. In these societies, due to multiple reasons, male children are more valuable than females.

Pakistan Demographics Profile mentions that current male-to-female ratio is 1:06. The sex ratio in other countries of the region, like China and India, is even higher than Pakistan.

According to the Advocates for Human Rights, “Son preference” is a custom rooted in gender inequality that is prevalent in many countries and found across religions and classes.

It is, however, most apparent in countries of South Asia, where poverty is prevalent, and where families might view the “continuity of the male line” as a matter of particular importance.”

The writer has recently carried out a study, in different urban areas of Sindh province, on the phenomenon of son preference and gender discrimination in the society. The research tried to find out the intensity of such phenomenon; furthermore, the study tried to explore that are girls denied the same quality food, healthcare and education that their brothers receive?

It is really interesting that a large number, 75.35%, of the survey respondents – the mothers of newborn babies, were of the opinion that their husbands and mother-in-laws always wanted to have a son; however, 24.65% admitted that having son is their biggest desire.

Uzma is a Master’s degree holder and presently teaching in a local school. Uzma is a mother of a boy and a girl and she had recently given birth to another girl. She said,

“Neither my family nor I have any desire to have more sons than daughters. I am happy that my baby is healthy and I will try to make my little girl an educated and productive member of the society.”

It is interesting to note that 16.00% of the respondents had no idea about any such discrimination.

Fareeda is a graduate and mother of two daughters and a son. She mentioned that, “Whenever my daughters have any heath problem, my husband always preferred to delay doctor’s visit for two to three days.”

She admitted that due to financial crunch her husband tried to avoid or delayed doctor’s visit for their daughters; however, Fareeda mentioned that for their youngest and only son they always tried to acquire immediate and best possible health care facilities.

It is pertinent to mention that most of the respondents said that “food discrimination” exists in their families. They added that male family members of their families eat first and when they finish their meal then women and girls eat the remaining food. One can imagine the quality and quantity of leftover food for women and girls, which is quite clear when we look at the health indicators of young girls and women in the country.

The immunization of children, from different diseases, has been followed by the respondents, according to the provided answers. However; it was revealed that many misconceptions also exist about the vaccinations due to illiteracy and ignorance. It was also informed by the respondents that vaccinations may not prevent children from diseases and even cause certain health problems for the child.

In many families, daughters are linked to severe [economic] loss. One of the responding mothers informed that she works as an accountant in local office; she said that her brothers always mentioned the high expenses the family has bourn upon her education and marriage. She added that it has been her untold duty to give water or press the clothes of her brother and now to her husband. “In my entire life neither my brother nor my husband ever give me water or press my clothes,” the mother of three children informed.

Girl’s access to education is also an issue of utmost importance; while answering an overwhelming majority of 78.68% informed that there girls are getting education either in formal schools or Madrasahs. The remaining 21.22% admitted that their daughters are not getting any type of education.

It is, however, pertinent to mention that a number of respondents acknowledged the fact that their daughters are getting education in government schools while their sons are studying in English medium schools.

Anila is a mother of two boys and a girl; she informed that, “Both of sons are getting education is a quality English medium schools. The tuition fee in the school is quite high; therefore, we enrolled our daughter in a government school.” She also admitted that quality education has become an investment and therefore the family is trying to secure the future of their sons as they will live with them for the rest of their lives.

According to a report titled “25 Million Broken Promises” by Alif Ailaan, a local alliance for education reform, informed that there are currently 25.02 million boys and girls between the ages of 5 and 16 who are not in school. Out of the mentioned figure the number of out of school girls are 13.7 million (55%) and the numbers of out of school boys are 11.4 million (45%).

Rizwana Jabeen, a clinical psychologist and a researcher, observed that discrimination on the basis of gender is a distressing reality, primarily in under developed and developing countries; however, the phenomenon also exists in developed world. She also informed that,

“Even in this modern age still many families don’t want to have a baby girl in their families.”

The psychologist added that discrimination affects the general wellbeing and may lead to low self-esteem and minimal or no self-confidence, which seriously harm personal, intimate or social relationship. Girls or women who face discrimination are more likely to develop mental health issues: stress, depression, and anxiety.

It is a fact that, “Pakistan is ranked at the 141 position in the Global Gender Gap Report (GGGR), 2014, the second lowest spot on a list of 142 countries.” The report – published by the World Economic Forum (WEF) in 2014, quantifies the magnitude of gender-based disparities and tracks their progress over time. It seeks to measure one important aspect of gender equality: the relative gaps between women and men across four key areas — health, education, economy, and politics.

According to the report, Pakistan is ranked 141 in terms of economic participation and opportunity for women, 132 in terms of education attainment, 119 for health and survival and 85 for political empowerment.

It is, however, important that we can help minimize the gender based discrimination in our society. Some of the relevant recommendations are: improve girls’ access to education; end early and forced marriage of girls; gender based violence should not be tolerated; ensure women’s access to quality and continue health care services; and remove gender biased legislations.