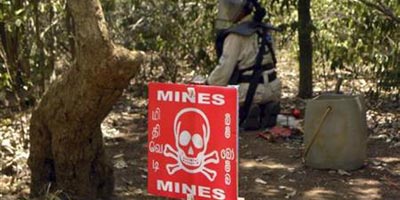 Wearing a visor and a protective vest over grey fatigues tucked into black military boots, former housewife S. Dishanty crawls on her hands and knees through dense bush, slowly inching forward and methodically scanning the ground.

A year ago, this 23-year-old Sri Lankan woman was looking after her elderly parents and young son in their war-devastated village. Nowadays, she searches for an instrument of that destruction: landmines.

"My husband went missing during the war. My family and I lived in a camp for displaced people ... when we returned home after the fighting, everything was destroyed," Dishanty told Reuters in a cleared patch of a mine field in Sri Lanka's northwestern district of Mannar.

Dishanty is part of a small number of women in post-war Sri Lanka who are taking on the risky role of clearing up the legacy left from a conflict which lasted a quarter of a century -- and changing age-old views in this conservative and patriarchal, largely Hindu Tamil community.

People are proud of me

"I had to find a job to support my family. This job gives me an income and has made people proud of me."

The Indian Ocean island is in its third year of peace after government forces defeated the separatist Tamil Tigers in May 2009, but the threat of landmines and unexploded ordnance (UXOs) lies buried under swathes of agricultural and forest land, as well as some villages.

After almost 10 years of the army and aid groups "de-contaminating" the island, reports of casualties are dropping. According to the Landmine and Cluster Munition Monitor, there were six deaths in 2009 compared with 11 the year before.

But experts say there are hundreds of thousands more mines, mainly in the north of the country, which could take another decade to clear.

In an environment where skills are scarce, funding low and pressure high to clear farmland to restart cultivation, women like Dishanty -- survivors of the violence -- are stepping forward.

"These women work on the front line of the humanitarian demining effort in Sri Lanka," said Nigel Robinson, country program manager for the Swiss Foundation for Mine Action (FSD), which counts 75 women among its 750 deminers.

Aid workers estimate Asia's longest-running modern war left behind as many as 90,000 war widows or women whose husbands just disappeared.

"Many of these ladies head their households -- their husbands are missing or were killed in the war -- so this is an opportunity for them to earn money to take back to their families."

As displaced communities return home and begin to rebuild, many women are being forced to change from their traditional roles as carers to providers for families with as many as six or seven mouths to feed.

With a scarcity of skills and jobs in this war-ravaged region, opportunities offered by organizations like FSD -- although seen as dangerous and against the traditional view of a woman's role in this society -- have been welcome.

Among the three main demining groups, there are now about 200 women deminers.

The women, like the men, attend a camp for three weeks learning about the types of explosives and landmines they are likely to encounter, plus the skills and techniques required to search and mark landmines.

In the minefields of Mannar, deminers work in searing temperatures in heavy protective clothing, using shears to cut through the overgrown grassland which was once paddy field.

The work is painstaking and stressful -- the deminers systematically scrutinize the ground inch by inch, with the potential of a deadly or dismembering explosion ever-present.

But the women say the job, with a salary of $250 a month and full insurance, provides not only income but also respect, even if they have to spend three weeks at a time away from home.

"I did have concerns about the safety at the beginning, but we have a standard operating procedure and if you are careful and follow instructions, it's safe," says Biruntha Ravichandran, 21, who is supporting nine family members.

"People used to come up and say 'How can a woman do that job?' But now they ask me to get them a job here too," she says, smiling as she puts on her baseball cap and heads back to camp after finishing a seven-hour shift.