Sri Lanka: Sexual Abuse of Girls and Women on the Rise 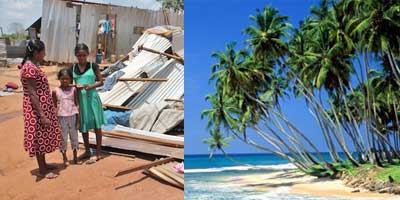 Sri Lankan tourist industry booms, as refugees of the civil war struggle to recover from a recent cyclone.

Sri Lanka: Sexual Abuse of Girls and Women on the Rise

Sri Lanka, an island known as the pearl of the Indian Ocean, boasts an exotic beauty – attracting thousands of tourists every year.

It’s this public face of pride, serenity and beauty which the government seek to portray, whereas, the reality is far worse.

The country has now faced civil war for over a quarter of a century, the war being between the Liberation Tigers of Tamil Eelam (LTTE), who fought for the creation of an independent state in northern and eastern Sri Lanka against the Sri Lankan government.

The Pearl of the Indian Ocean has buried the lives of many over the past quarter of a century; however, its most recent war resulted in a horrific bloodbath claiming the lives of thousands of innocent civilians.

Both the LTTE and the Sri Lankan government have been accused of war crimes by a UN report produced at the request of Secretary-General Ban Ki Moon. However, the atrocities and violations of human rights caused by the Sri Lankan army were fuelled by the government leaving the future of surviving civilians with no hope, dignity, or justice.

During the final stages of the most recent war, it was reported by the UN that as many as 40,000 people – possibly even more, had died as a result of government shelling, much of which was targeted on so called “no fire zones”. The UN reported that an international investigation should take place.

This has been rejected, and the voices of Tamil civilians have since been silenced.

The UK's Channel 4 first documented the situation in its award-winning documentary, “Sri Lanka’s Killing Fields”, which aired in June 2011.

It broadcasted the horrific situations civilians were put through, and looked at first-hand evidence provided by surviving civilians. The documentary had at last given voice to those lives silenced – and forced the world to see the flaws in what is seen as a pearl.

Blood spilt was a result of the overflowing illegality which flooded Sri Lanka in the final stages of the war. A fundamental International law breached was the targeting of civilians. A core principle of war is to protect civilians, to ensure that the population was not starved; however, such legalities were ignored.

The constant denial and the lack of cooperation from the Sri Lankan government lead to the silence of injustice to the extent where it became deafening.

It was this injustice and revelation of new video footage which lead to Channel 4’s follow-up documentary, which further exposed damning evidence of atrocities committed in the war.

The first documentary featured an unidentified woman describing her experience: she was traumatised to the extent that she could not bring herself to use the word rape –  she stated that she was told to remove all her clothes, and then she was “hugged” by the Sri Lankan army.

She went on to state  that young people were taken away and told to “hug” each other before they were shot.

The follow-up documentary built on the atrocities depicted in the first documentary,   showing the state of starvation the civilians were left in, the trauma women faced, the children left parentless, and the fact that nothing had been done. It broadcasted footage dating from the 18 May, 2009 – that had been shot as a grotesque “trophy video” by Sri Lankan armed forces.

The film showed naked corpses of women – some of whom appeared to have been raped or sexually assaulted, and then murdered.    Rapes have became the norm, to a point where videos of rape are seen as “trophies” – and is still ongoing today.

BBC singhala.com recently reported on the “Alarming rise of sexual abuse in Jaffna”. It reported on 32 incidents of child abuse that have been reported from the months of January and February this year. Girls as young as seven have been sexually abused and sexual violence towards women is rising, with each day that passes.

Dr. S. Sivaruban, of the Judicial Medical officer of Jaffna Teaching hospital stated, “There were 102 cases of sexual abuse reported in Jaffna in 2010 and it has increased to 182 in 2011

From the lack of deterrent mechanisms, it can be assumed that such criminal activities are undertaken with the knowledge of the Sri Lankan government by its troops.

However, the government appears to be hiding under the pretence that these “trophy videos” broadcasted by Channel 4 have been edited and are fake, despite such footage being authenticated by the UN.

The inability of the government to take responsibility has lead to the rise in the number of reported sexual abuse incidents. With no deterrent mechanisms preventing such incidents, women are left silenced, further adding to their trauma.

Tamils Across the World Remain Fearful

For decades now, Tamils have been forced to seek refuge in neighbouring countries and other countries across the globe, desperately hoping to leave behind the atrocity and trauma, and live peacefully.

The downfall of this is that many Tamils across the world fear returning back to their homes, and civilians who managed to flee the wrath of the final stages of the war and the anonymous witnesses who spoke of their accounts to Channel 4, fear for their identities being released or being returned to Sri Lanka, for they are terrified of the fate that may await them if they return.

Hopes for Sri Lanka to finally return to the beautiful and serene country the government depicts it to be is still uncertain, with no definite answer as to whether an independent investigation will be taking place. Until then, justice will not have been served.

The military has been increasing its economic role and controlling the land, as opposed to rebuilding a society – and what comes across as no surprise is that little benefit has been had for most, if not more, of the 430,000 people who have returned to their lands and villages over the past years.

Government restrictions on aid and early recovery activities – often enforced by local military commanders, have prevented the effective delivery of many social services, including systematic and effective trauma counselling, and other psycho-social support to families struggling to cope with the deaths and disappearance of tens of thousands of relatives.

An organisation called North East Women’s Network issued a statement on International Women's Day about the continuing violations of the rights of women in Sri Lanka.

"Women in the North and East have complained of several instances of harassment and violence at the hands of the military, paramilitary and government officers, apart from the violence that women face within their homes and in the community. This increase in violence by people in authority has placed women in a particularly vulnerable position, unable to take any recourse...."

In a report entitled 'Sri Lanka: Women’s Insecurity in the North and East' they stated that the 30 year civil war has left women and girls vulnerable at multiple levels.

"The consequences for women and girls have been severe. There have been alarming incidents of gender-based violence, including domestic violence within the Tamil community, in part fuelled by rising alcohol use by men. Many women have been forced into prostitution or coercive sexual relationships. Some have also been trafficked within the country and abroad.

Pregnancies among teenagers have increased. Fear of abuse has further restricted women’s movement and impinged on education and employment opportunities. The fact that women must rely on the military for everyday needs not only puts them at greater risk of gender-based violence, but also prevents them from building their own capacity within communities.

The island-wide spate of attacks on women by individuals labelled “grease yakas (devils)”, which reached the north and east in August and into September 2011, and the lack of serious response by the security forces (except to brutally crack-down on protesters across the north and east, and especially in Jaffna), exposed the near-complete collapse of trust in law enforcement."

The report not only says that the Government of Sri Lanka must acknowledge that women and girls in the north and east face serious threats but also that the UN must take a stronger stand in protecting women and girls.

However, with the army still in charge and the perpetrators of abuse amongst their ranks, still at large, the women have little trust in the status-quo.

At the same time, the government is determined to portray its civil war as being something of the past and to give the impression of business as usual.