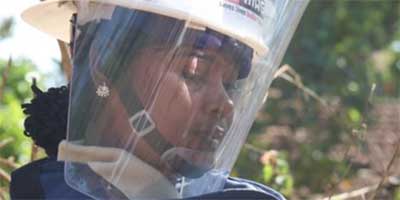 When Sri Lanka's long civil came to an end in 2009, the town of Puthukudiyiruppu was left with a grim legacy. Landmines and other unexploded devices lie behind every tree, in every ditch, in houses, churches and temples.

Many were randomly scattered by Tamil Tiger rebels in the final months before their defeat. Both the rebels and the army made extensive use of Pakistani-made P4 mines, which can take the foot off someone unfortunate enough to step on them.

But now efforts are under way to rid the country of this scourge once and for all.

At sunrise 12 women deminers laugh and joke as they prepare for work.

They are one of three teams of women, and five of men, employed by the UK-based Mines Advisory Group (MAG) - one of several demining charities working to rid Sri Lanka of unexploded weaponry left over from 26 years of war.

"So many people died, so many children, husbands, whole families," recalls one of the women, 38-year-old Jayakanathan Valarmadhy. Like her colleagues she is Tamil and from the north, and endured the war.

"Many people lost hands or legs. I saw many like that. I helped in the hospitals, gave blood, we did whatever we could to help."

In 1998 the war took the life of Valarmadhy's husband. Now, through her job with its specialist training, she is helping eliminate any danger to displaced people resettling here.

Clad, like her, in protective visors and body armour we watch her tackle eight mines strewn around an outside toilet.

The land has first been raked by big excavator machines which have exposed the mines on or near the surface - but the next work has to be manual.

Valarmadhy inches forward, using small tools to clear a strip 1m (40in) wide, digging down to 6in - the accepted safety depth - to ensure there are no mines between herself and the nearest visible mine.

In half an hour she gets to the mine and a male supervisor lifts it out and takes it off for later detonation.

The team must do the same for each mine. It is slow, painstaking work. Although demining in Sri Lanka is progressing well, finishing the job will take another eight years, officials say.

Valarmadhy, as a widow with parents and three teenage boys to look after, loves this work although she admits many in her village are bewildered.

"They ask us questions, they insult us a lot," she says with some amusement. "'How can you do this work which is for men? How can a woman do that?' But people should know that we work here so they can resettle in these areas all the sooner."

"The contamination of mines is more high and so we have to check accurately all the area around houses, around well, around toilet, around big tree - around all that area that can have some importance during a fighting scenario," he says. "We find mines even in the cemetery."

At a separate site across the town the Sri Lankan Army's Humanitarian Demining Unit gathers unexploded weapons extracted by NGOs and its own big demining operation.

Brig Dhanajith Karunaratne, who oversees it, points to mines, artillery shells, mortars and a whole barrel of TNT.

But we are still surrounded by untouched, dangerous territory, cordoned off with skull-and-crossbones signs. He believes this was a rebel ammunition and arms distribution point - the army has come only recently to this place.

Then it is time to detonate a pile of them - work which only the military does. We crouch behind sandbags some way off and hear the resounding thud.

The brigadier says it is vital to keep educating people about landmines as civilians have suffered more than 120 landmine-related accidents since 2009. In a recent tragedy two boys died when they picked up a landmine at Kalpitiya on the west coast, on the fringes of the former war zone.

"People go to the confirmed hazardous areas for various other interests, especially for collecting scrap metal and so on. So without knowledge they bring the fuses and meddle with it and then create the accidents.

"But... we have increased the number of mine risk education lessons given to civilians with support of the UN children's fund [Unicef]. With that this amount has drastically come down," he says.

At dusk we see smoke rising by the roadside in Puthukudiyiruppu. P Thanabalasingham and his relatives have a small bonfire going.

It is demining that has released their home for habitation. But Thanabalasingham is dejected at the state of the house.

"You can't repair this. Everything is broken. We need to destroy it and build a new one," he says.

"It's sad. They say they are giving us some temporary houses so we'll need to stay in them and rebuild this one."

A massive task of rebuilding and resettling remains for him and his family.

She comes from Jaffna and was spared the worst of the war. But she still has a sense of mission.

"One day the country will be free of landmines," she says. "Meanwhile we want to take these people and resettle them and make their lives better."