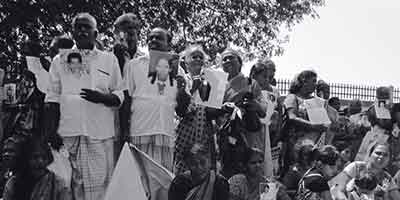 A UK-rights group has accused the Sri Lankan government of failing to address the marginalization and sexual abuse of women living in the country’s former war zones in the north and east, an allegation officials dismiss as coming from a “diaspora-led false propaganda machinery”.

A report recently published by the London-based Minority Rights Group (MRG) said rape and sexual harassment of women in former war zones in the north and east are continuing even after the end of a 26-year civil war in 2009, and that 89,000 widows (based on a 2010 government estimate) - including some 40,000 female-headed households - are particularly vulnerable to sexual harassment, exploitation and assault by army personnel, domestic tourists and others due to the women’s poverty.

In a general culture of impunity, MRG authors wrote, Tamil and Muslim women (the two largest ethnic minorities in the former war zones, 12 and 8 percent of the general population, respectively) have feared reporting crimes to police.

The report cited data from Jaffna Hospital in the north of 102 reported cases of rape and “severe violence” against women and girls from Northern Province in 2010, 182 in 2011 and 56 in just February and March of 2012.

MRG’s South Asia expert, Farah Mihlar, wrote: “Tamil and Muslim women are especially concerned for their safety and freedom, and yet have little course for redress since they fear reporting attacks against them to the authorities.”

The island’s military spokesman, Ruwan Wanigasooriya, told IRIN that of 125 people found guilty in civil courts of perpetrating sexual violence in the north between January 2007 and May 2009, seven were security forces personnel.

After fighting ended, from May 2009-2012, of 307 people found guilty in civil courts of committing crimes of sexual violence, 10 were soldiers, based on a military assessment.

He added: “We deny in the strongest terms that there is a prevailing culture of silence and impunity for sexual violence crimes,” noting that the government has taken “legal action” and that convicted soldiers are referred to the military tribunal for court martial.

Citing the army assessment, Wanigasooriya wrote in a statement recently sent to journalists: “It is worthwhile to notice that only 11 incidents out of a total 375 reported incidents [from January 2007-May 2012] can be attributed to security forces. Therefore the inference that the presence of the military contributes to insecurity of women and girls in the former conflict affected areas is baseless and disingenuous.”

The demographic shift following the civil war - from a largely homogenous Tamil community to one that includes more ethnic groups, including Muslim returnees who had been forced out by Tamils in the late 1990’s, domestic tourists and, the authors wrote, the government-sponsored relocation of workers and households from the majority Sinhalese ethnic group, has heightened the threat of women being sexually exploited by armed forces and other men (sometimes from their own ethnic community) due to poverty.

“With the increasing presence of Tamil diaspora in their home towns (places of origin), community women have told us that their daughters are often being viewed as sexual objects and in some cases, been sexually assaulted,” a leading woman’s activist working in the north told IRIN in an e-mail.

For almost three decades, separatist rebels known as the Liberation Tigers of Tamil Eelam (LTTE) fought for an independent state in the north carved along Tamil ethnic lines. Fighting ended in May 2009 with the crushing of rebels by government forces.

“After the conflict the situation has got a lot worse. People are less disciplined. There are outsiders who have come from other areas. There are lot of army people; they are in buses, everywhere,” said a Tamil woman from Mannar District, as cited in the MRG report.

The report explained how during the war, LTTE fighters (mostly followers of Hinduism) maintained a rigid code of conduct in areas it controlled, with sexual relations monitored and restricted to married couples. “While women do not necessarily approve of what the LTTE did, nor any similar regulation of their personal lives, the current context has left many feeling disoriented and insecure,” MRG wrote.

The current commissioner of Sri Lanka’s Human Rights Commission (appointed by the president), Prathiba Lamanmahewa, told IRIN the island is committed to investigating all rights violations but will not be “bulldozed” by groups with vested interests.

“We have come a long way in post-war recovery. Most recommendations of the Lessons Learnt and Reconciliation Commission (LLRC), the blueprint for reconciliation, have been implemented.

Adequate steps have been taken to restore civil administration in the north and now there is a provincial council there. It is a process and Sri Lanka has fared better than many other conflict-ridden countries,” he said.

But local activists and residents continue calling for more.

In interviews with some 1,800 households, a citizen group published a report in March this year concluding “little progress” had been made on the recommendations.

For allegations of sexual abuse, the MRG report called on the police to create Tamil-speaking desks in all police stations in former conflict zones, boost female representation among government officials in the north and east, as well as prosecute perpetrators.