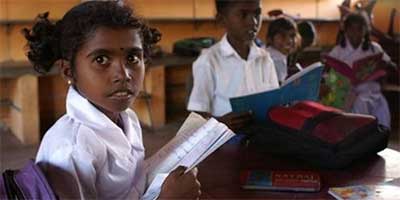 Nearly one million schoolchildren - about a third of the school-age population in Sri Lanka - do not have safe sanitation, despite the island’s overall sanitation coverage reaching near 89 percent of the population.

Nearly 1,300 out of 9,500 primary and secondary schools surveyed in 2011 (almost one million schoolchildren), and around 180,000 families nationwide, do not have access to a sanitary way of disposing of their faeces, said Deepthi Sumanasekera, deputy general manager of the National Water Supply and Drainage Board (part of the Ministry of Water Supply and Drainage), which conducted and recently released the survey’s findings.

The study noted gaps in the island’s sanitation coverage, which included schools, coastal areas and the “plantation”, also known as the tea sector located in Central Province’s Nuwaraeliya District and in Uva Province’s Badulla District.

Residents in that sector have historically had among the worst income, education and health indicators nationwide.

“These schools either lacked toilets or had toilets without water supply,” the secretary of the Ministry of Water Supply and Drainage, Amarananda Abeygunasekera, told IRIN.

Despite these shortcomings, Sri Lanka has already met the Millennium Development Goal (MDG) target milestone of sanitation coverage for 84.5 percent of its population before the 2015 deadline.

Sri Lanka has also increased its safe water supply coverage from 78 to 84.1 percent, while sanitation coverage increased from nearly 84 to 89 percent in the past five years, according to the government.

“There are schools where children are advised not to drink water to avoid visits to toilets. In 13 years of schooling, children sow seeds not for education but for renal failure,” she said.

“Girls are regularly discouraged from using toilets and this increases absenteeism during menstruation. There are reports of school teachers who after five years of teaching without accessing toilets, end up with renal failure,” she said, referring to a reported case from central Sri Lanka.

She added that there are no “girl- friendly toilets” even in all-female schools with good waste disposal facilities, soap and water. “These girls suffer the most and are compelled to absent themselves from school during menstruation.”

According to a new country paper by Sri Lanka’s National Water Supply and Drainage Board prepared ahead of the recent South Asian water and sanitation summit (SACOSAN V) in Kathmandu, Nepal, the number of Sri Lankans without access to “improved” sanitation in 2012 was 2.3 million (11 percent of the 21 million population).

According to the Ministry of Water Supply and Drainage, child-friendly school sanitation with sustainable care and maintenance is to be tenth out of 16 priority areas in a new blueprint (still in draft form) that acknowledges school sanitation as a challenge.

Meanwhile, hundreds of thousands of schoolchildren and their teachers improvise to get through long, often hot or rainy days.

“My school has converted its toilet, available for 140 children, into a store room. There is no water supply. We have to bring buckets of water from the school ground. It is a hassle so we prefer not to use the toilet,” Samanthika Deraniyagala, a 12-year-old student from an all-girls’ school in Galle District, told IRIN.

Deraniyagala’s mother, Anuradha Deranyagala, 42, said: “My daughter is about to reach puberty. I am worried about her personal hygiene because the school, despite our complaints, has still not managed to get water supply to the toilet. The teachers’ toilet suffers the same plight.”

“Child- friendly toilets, separate for girls and boys, with facilities for menstrual hygiene requirements, will be our new focus. This is a departure from earlier constructions as we look at new infrastructure designs suitable for children,” said Angoda Hewaduralage Gunapala, assistant general manager of the Water Supply and Drainage Board.

Colombo is drafting its first nationwide policy on sanitation, which has to date only been addressed in rural areas.