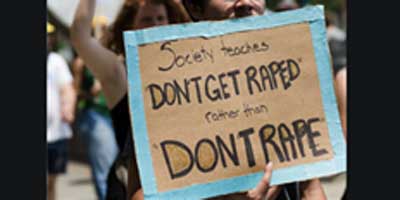 Polls show that Australia is one of the best countries to be a woman. However, these last couple of weeks have proven otherwise.

In late September, Irish-born 29 year-old Jill Meagher was abducted while walking 700 metres from a pub where she was meeting with friends to the apartment that she shared with her husband.

She was missing for six days until the police found her body in the north of the state. The show of support from the public was overwhelming, with people taking to the streets and to social media in support of the police and Jill’s friends and family.

This article does not intend to cover the horrific events of last week, but would look at the victim-blaming that occurred following Jill’s disappearance.

The most concerning aspect of some of the media coverage of the issue was the fact that many reporters found reasons to blame Jill herself for the abduction, insinuating that a woman who walked alone at night and dressed up to meet friends should naturally expect to be attacked.

Comments such as, “She was intoxicated,” or “She was a very attractive woman,” “She was a party girl,” and “Her heels were too high,” Flew around in the media. The fact that Jill had refused to be walked home by a male colleague was also disseminated far and wide by many media sources.

Many people have come out and warned girls and women not to walk alone at night, and given tips on how to ward off potential attackers. One such article by Chelsea Hoffman is titled, ‘Rape and Murder of Jill Meagher a Warning to Women.’ Furthermore, many schools offer self-defence and martial arts classes for their female students, a portion of whom will face violence in their lifetimes.

However, no one has gone into schools to warn the small proportion of men who may attack a woman (or another man) in their lifetime, that they should not do so and that they do not have the right to do so. A change in the way we view victim and perpetrator is necessary.

The questions that needed to be asked by the media such as, ‘Why would someone do this?’ were replaced by, ‘Why was she doing what she was doing.’ Articles that should have been published about how wrong it is to blame victims of crime were replaced by articles such as Hoffman’s. Thankfully, the Australian public was so outraged by Jill’s abduction that they were unlikely to take in any media that blamed her for her abduction.

A Shift in Mindset

A famous quote demonstrates the mindset that much of society is currently stuck in, ‘Society teaches us don’t get raped, not don’t rape.’ It’s a mindset that we are going to have to shift. No victim of a crime as horrendous as this is deserving of what happened to them, or desires to be abused in this way. They have faced enough trauma, and do not need to be put on trial by the media as well.

Melbourne has demonstrated their support for Jill and her family, with over 10,000 people taking to the street where she was abducted in a sombre vigil. Thousands of people are also spreading hate of the perpetrator via social media; however, there is no doubt that he will receive a hefty sentence for his crime through a just means. These thousands of people demonstrate that the potential momentum for a shift in attitude is already in place.

Now, we just have use this people power to denounce and refuse to consume press that seeks to find reason to blame victims of crime for their misfortune.

Claire Poyser is a Safeworld Student Writer. She is studying Humanities at university in Melbourne, Australia, majoring in international relations and politics, and focusing on women’s rights, injustices towards women, and the experiences of women in peace and conflict situations.

Since then, I have been working hard to share what I learnt at the summit and further highlight the injustices faced by women and girls.

I believe that the Safe World for Women Student Writers Project is the perfect way to do this!"