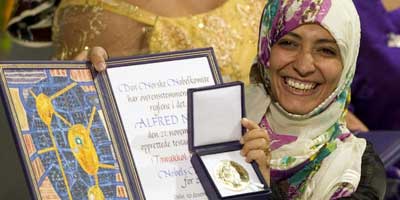 Three women who fought injustice, dictatorship and sexual violence in Liberia and Yemen received the 2011 Nobel Peace Prize at a ceremony in the Norwegian capital on Saturday.

Prize committee Chairman Thorbjoern Jagland said the three women represent the struggle for “human rights in general and of women for equality and peace in particular.”

No woman or sub-Saharan African had won the prize since 2004, when the committee honoured Wangari Maathai of Kenya, who mobilized poor women to fight deforestation by planting trees.

Sirleaf was elected president of Liberia in 2005 and won re-election in October. She is widely credited with helping her country emerge from an especially brutal civil war.

The 39-year-old Gbowee long campaigned for the rights of women and against rape, challenging Liberia’s warlords. In 2003, she led hundreds of female protesters through Monrovia to demand swift disarmament of fighters, who continued to prey on women, despite a peace deal that should have ended the 14-year civil war.

Karman, a journalist and member of the Islamic party Islah, is the first Arab woman to win the Nobel Peace Prize, and at 32, the youngest peace laureate ever. She also heads the human rights group Women Journalists without Chains.

Last year’s peace prize went to imprisoned Chinese dissident Liu Xiaobo, who was represented by an empty chair at the awards ceremony as an infuriated China would not allow him to travel to Norway.

The other Nobel Prizes — in medicine, chemistry, physics and literature, and the Nobel Memorial Prize in economic sciences — were to be handed out at a separate ceremony Saturday in Stockholm.

Worth 10 million kronor ($1.5 million) each, the Nobel Prizes are always handed out on the anniversary of award founder Alfred Nobel’s death in 1896.