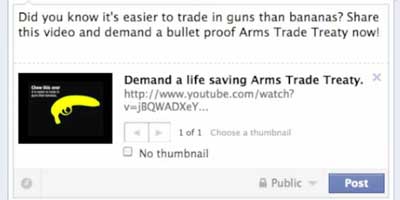 Gangs brandishing pistols. Insurgents blasting rockets. Governments and their military hoarding massive stockpiles of weapons. Ever wonder how they manage to get their hands on the weapons implicated in so many flagrant human rights violations?

The answer lies with the weapons industry that rakes in over $1,000 billion per year (USD),  and yet has few internationally agreed-upon regulations for its products’ distribution.

In comes the United Nations with a proposed solution, in the form of an Arms Trade Treaty (ATT). From July 2nd through to the 27th in New York, the UN is hoping to unite Member States in a “legally binding instrument on the highest possible common international standards for the transfer of conventional arms.” In other words, the upcoming conference aims to set restrictions on the import and export of weapons, as large as fighter jets and as small as bullet casings, to conflict zones that are already facing instability and human rights crises.

Oxfam campaign video.Such an agreement would be unprecedented in the arms trade – a fact so astonishing, that Amnesty and Oxfam International have resorted to satire. These organizatons have adopted the humble yellow banana as a symbol of lopsided global trade restrictions that place more limits on the movement of bananas than on the exchange of weaponry.

In recent years, armed violence has claimed approximately 740,000 victims per year, and yet for every person on the planet, $216 (USD) are spent by governments on weaponry. In addition, the majority of these internationally-exchanged weapons are sent to developing countries, where their potential to destabilize infrastructure is much greater.

Aside from the benefit measured in human lives, arms trade regulations stand to produce massive economic benefits. Corruption hounds the weapons industry, costing the industry an estimated $20 billion (USD) per year and pushing up prices.

Poverty in conflict zones could also be positively affected by limiting arms exchanges with unstable regions.

Each year in Africa, an estimated $18 billion (USD) are lost to armed conflicts. This is a sum equal to the amount spent in development aid for the whole continent. What’s more, the economies of African nations atrophy by 15 percent when faced with armed conflict. Under bombardment and gunfire, infrastructure break downs, and all the lives dependent on it are threatened.

When economies shrink, opportunities for women dry up as well.

An estimated 70 percent of the world’s poor are women, partly due to unequal access to assets, education, and employment. The number of impoverished women can only rise when faced with economic hardship. Along with other members of society, women’s access to food, medical care, and other resources suffers as a result.

But these access issues can affect women and their dependents in unique ways.

Vitamin deficiencies and anemia plague women particularly, and when food is limited, these problems are exacerbated. A conflict-ridden Mozambique, for example, faced a “konzo” paralysis epidemic among women and children specifically, when food shortages forced rural residents to eat bitter cassava.

Female health concerns extend well beyond dietary needs. During times scarred by armed violence, reproductive health becomes subsidiary, if not altogether nonexistent. Fewer family planning resources means the potential for more children, and more children can increase stress on women, who are the primary caregivers in many cultures.

The additional healthcare needed to handle pregnancies also may not be available in the resource-strapped conflict zones, so pregnant women also face the increased potential for preventable complications.

A Conduit for Sexual Violence

Rape survivors in DR Congo. Photo: COFAPRI - Safeworld Field PartnerCombine inadequate reproductive health with the sexual violence, often occurring in conflict zones, and you find an environment particularly virulent for women. Small arms, the most common weapon used against women in general, often facilitate rape and other gender-based assaults both during and after conflict.

One among many striking examples is that of Sierra Leone’s civil war. Between 1991 and 2002, an estimated 64,000 women of all ages suffered from sexual violence at gunpoint as a result of the war. This represented 50 percent of Sierra Leone’s entire female population at the time.

But Sierre Leone is hardly alone.

Weapon-aided rape has also occurred in the conflicts of the Darfur region, northern Uganda, Bosnia-Herzegovina, the Democratic Republic of Congo, Liberia, and the former Yugoslavia.

Unwanted pregnancies are only the tip of the iceberg for the victims of these crimes. Aside from the psychological effects and the potential for social ostracism, sexually transmitted infections continue the pain of sexual violence long after the act itself.

Rwanda women are still re-building their lives. Photo: Centre Ubuntu - Safeworld Field PartnerThe relationship between sexually transmitted infections and conflict zones is achingly apparent in the Rwandan Genocide. Before the 1994 genocide, in 1991, an HIV survey of the Rwandan countryside showed an infection rate of 1%. Three years after the genocide, this overall number jumped to 11% – including a 17% infection rate for women.

In a survey of the female survivors known to be raped during the massacre, 67% were HIV positive.

In general, men have tended to be the greatest victims of armed conflicts. These statistics, however, are subtly changing as the nature of warfare alters.

Poverty is rife in Karamoja, Uganda, a warrior region once heavily armed by President Museveni. Photo: Safeworld Battlefields are no longer the preferred milieu of modern warfare, some observers warn. Conflicts are increasingly being held in civilian zones, amid houses, schools, and markets filled with women and children.

Furthermore, while combat kills significantly more men than women, women are more likely to succumb to the “indirect” results of armed conflict, including resource availability and health complications, even after the fighting is over.

Men are generally believed to be the majority in fatalities, but female victims more commonly face a lack of aid in the wake of an explosion. A study in the Republic of Yemen showed that men are better-placed to receive rapid emergency care than women, and men may also rank higher in priority for artificial limbs. Disabled Yemeni women can also face the prospect of divorce, which is further debilitating in terms of wealth and social status.

In a perfect world, July’s Arms Trade Treaty would help prevent weapons from flowing into areas rife with conflict and human rights abuses.

In a perfect world, it would help prevent the unwarranted violence that affects men and women equally, if but differently.

But with giant profits being turned from the sales of military arms, accessories, and training, the Arms Trade Treaty itself might be a hard sell for the United Nations. While the proposed treaty would neither advocate disarmament nor alter the Member States’ domestic arms trade, many are already up in arms about the terms of the treaty.

What will be defined as “arms?” What will be the financial impact of any restrictions? And can there be an objective standard to define an undesirable recipient of arms when UN Member States have conflicting alliances and interests?

Talk of American involvement in the Arms Trade Treaty has elicited the fears of certain groups, both domestically and abroad. For example, some believe that the Treaty would restrict U.S. weapons exchanges with democratic Taiwan, since that island has never resolved its dispute with the People’s Republic of China, and is not acknowledged as a separate state by the majority of UN Member States, the U.S. included.

The language likely to be included in the Treaty would prohibit trades that would disrupt peace or national stability, and that might interfere with Taiwan-U.S. exchanges.

Domestically, Congressmen like U.S. Senator Jerry Moran of Kansas fear that the international treaty will impede Americans’ right to bear arms. “I am... concerned [the Arms Trade Treaty] will be used by other countries who do not share our freedoms, to wrongly place the burden of controlling international crime and terrorism on law-abiding American citizens,” says Moran.

Yet others worry that countries’ weak domestic policies may render an international treaty flaccid.

For women in the United States, this can be illustrated by the increasing female role in international arms trafficking along the Mexican-American border.

During the past two years in Houston and South Texas, a dozen or more women have been implicated in gun smuggling rings linked to Mexican drug cartels. This uptick in female involvement is likely due to the contemporaneous rise in demand for weapons from the cartels.

Lured by as little enticement as $100 USD, these women play the role of “straw buyers”—having no criminal background, they can freely buy weapons from American gun dealers on behalf of convicted felons who do not share the legal right to purchase guns. Part of the scheme is to manipulate the perceived vulnerability of women to avoid suspicion.

The newspaper USA Today quotes Houston Police Chief Harold Hurtt as saying, “When a woman walks into a gun store and says she’s looking for a weapon for her own protection, there aren’t going to be a lot of questions.”

Infighting about gun rights and domestic policies may discourage some Member States from joining a unified Arms Trade Treaty, but there’s hope nonetheless. Even if giant arms traders like the United States do not join, an impact can still be made. Evidence of this lies in the Landmine Treaty. Notable abstainers to that treaty included major economies like China, Russia, India, and, yes, the United States. Despite this setback, the landmine trade has fallen drastically, and fatalities due to landmines have dropped by two-thirds.

To work at its fullest, however, the Arms Trade Treaty would unite all nations in eliminating the trade of any weapon product - down to the smallest gun part or bullet cartridge –  from empowering perpetrators of human rights crimes.

Only without the fear of violence can civilians start to feel empowered themselves.

"There are treaties that regulate the sale of bananas and dinosaur bones, but not yet the global arms trade. Irresponsible arms transfers prolong conflict, cause poverty and destabilise regions.
This July, world leaders will meet to draw up the first ever International Arms Trade Treaty. This treaty could save countless lives and help prevent human rights abuses around the world. Speak out now; contact your local MP and demand a bullet proof arms trade treaty via email, letter or twitter. Then share this video. Together we can help save millions of innocent lives."
Oxfam.

Allison Griner is a Safeworld Student Writer with a degree in Anthropology and English.

Allison is moving to Canada, where she hopes to study cultural reporting as part of a graduate journalism program.

"Anthropology in particular stoked my desire to build bridges between communities and to cross social barriers."