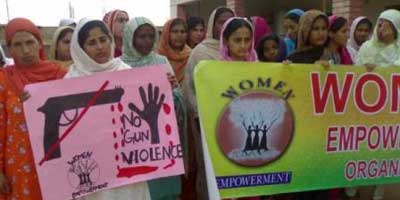 What are Small Arms?

If “virtually all international trade in goods is regulated,” why shouldn’t we regulate the global exchange of weaponry too?

This is the premise behind the upcoming United Nations conference in New York that will convene from July 2nd through the 27th to discuss the creation of an Arms Trade Treaty (ATT).  In theory, such an agreement would place restrictions on trades deemed irresponsible, including arms sales that would destabilize populations, create human rights crises, or heighten violence in conflict zones. While the UN conference will address the trade of everything from fighter jets and tanks to heavy artillery and bombs, some of the deadliest weapons to be discussed are physically the least impressive.

Back in 1997, the United Nations issued a bold statement, saying “small arms and light weapons have been the primary or sole tools of violence in almost every recent conflict dealt with by the United Nations.”

The report continued by declaring that women and children comprised around 80 percent of the deaths caused by irregular military armed with this kind of weaponry.

So what exactly are small arms and light weapons?

Not everyone agrees on what fits into this category, often known by the abbreviation SALW. Single-person portability tends to be the unifying qualification, though. Small arms generally include rifles, revolvers, pistols, and light machine guns, whereas light weaponry tends to be a bit more heavy-duty: machine guns, grenade launchers, portable anti-aircraft guns, and the like.

Majority of 'Conflict Deaths' Are Caused by Small Arms

The Small Arms Survey, conducted by the Graduate Institute of International and Development Studies in Geneva, estimates that 875 million small arms today are circulating around the globe as part of a 6 billion dollar (USD) industry.

This is worrisome, given that the United Nation describes small arms today as the cause of the majority of conflict deaths.

As civilians increasingly find themselves enmeshed in armed conflict, small arms threaten not only soldiers and militants, but women and children as well.

The United Nations warns that the shelf-life of small arms often surpasses the length of military conflict. As the most pervasive tools in criminal violence, small arms are implicated in many homicides in the turmoil of post-conflict societies, and these killings can sometimes exceed the number of conflict-related fatalities.

Women are not the primary users and/or sufferers of small arms. Young men –  the ones most likely to be involved in conflicts and attacks, are also most likely to be victims. Even among homicide victims, worldwide 90 percent are male. Yet these statistics alone should not breed complacency among women, especially when these proportions can vary from region to region.

The large infusions of small arms into Guatemala are reflected in high murder rates of women.

Among all female murders in Guatamala, 69 percent are committed with guns—a harrowing figure, given that 4,400 women from 2004 to 2010 have been slain.

Gender Violence During and After Conflict

The toll of small arms violence cannot simply be measured in gunshots wounds and cartridges spent. Many more victims are subject to intimidation by wielders of small arms, especially during times of conflict. A variety of human rights violations—mutilation, rape, sexual violence, abductions, and forced labour, to name a few—can be facilitated by a threateningly-pointed gun barrel.

Both during and after armed conflicts, the sexual exploitation and domestic violence that can be perpetuated under the menace of small arms affect women and children the most. What’s worse, these crimes are often under-reported, and when violence dominates social discourse, legal retribution can fall by the wayside. A 2011 briefing to the UN Committee on the Elimination of Discrimination Against Women illustrated the danger small arms on civilians an area of conflict.

A presentation on the political upheaval and civil war in Côte d’Ivoire highlighted gender-based violence targeted at women, violence committed by both state security and opposition groups alike.

The briefing posited that this violence was significantly increased by the rise in small arms imports.

In fighting small arms violence against women, part of the problem is disassociating guns with a concept of traditional masculinity. Michael Kimmel of The State University of New York observes that, since gun use is dominated by men, possession of small arms becomes a means of reinforcing male power and entitlement.

He suggests that the social construct linking gun ownership to masculinity can be eroded by expanding the concept of manliness to include traits perceived as feminine.

Attacking these social constructs requires reaching out to women as well as men. Women can sometimes propagate these gender stereotypes for their own empowerment, creating a catch-22 for female safety and advancement.

Climbing the Social Ladder in Brazil

Jessica Galeria, of the anti-violence NGO Viva Rio, points out that some Brazilian women associate with gun-carrying men-- including drug traffickers –  in order to climb the social hierarchies of low-income communities.

In Rio favelas, where small arms possession can translate into authority, the female partners of powerful traffickers are given the title of “First Lady” as a sign of respect.

In circumstances like the one Galeria describes, gun ownership provides incentives for both genders. Men attract more women, and women gain access to the male-dominated power structure. Obviously, the cycle of empowerment and violence is an unhealthy one, and women can lead the way in ending it.

As socializing forces in the community, women can play a formidable role in changing attitudes toward small arms. One success story in Albania, for instance, demonstrated the crucial role of women in disarmament.

As part of the UN’s “Weapons for Development” program, Albanian women visited other houses in their community to educate people about the dangers small arms posed.

On these visits, the women not only collected survey information from their neighbors about disarmament—they also managed to collect guns and ammunition as well.

Organizations like Oxfam insist that the upcoming Arms Trade Treaty be “all-encompassing.” To fully eradicate threats to the regional stability—and to female well-being-- all weaponry must be considered for regulation, in particular small arms.

The International Action Network on Small Arms (IANSA) goes further, saying the Treaty should prohibit trade of these arms to areas where there is a “substantial risk” that they will be used for gender-based violence like rape.

Since women’s physical safety at issue, many of these organizations additionally suggest that local women be engaged in peace-building and disarmament efforts within their communities.

Provisions on the trade of small arms could face opposition from certain groups, however. While the Arms Trade Treaty expressly concerns only international trade and not domestic policies, groups in the United States, for instance, fear that limits on small arms exchange could ultimately hinder personal rights to gun ownership.

Securing the United States approval on any small arms provision is imperative, since it represents a huge chunk of the small arms market.

July’s Arms Trade Treaty will provide a forum for large consumers and producers like the United States to discuss methods of tracking and limiting small arms in places where they present a significant threat to the peace and safety.

The gender issues involved with the use of weapons are sure to make women’s concerns a priority in the debate.

Allison Griner is a Safeworld Student Writer with a degree in Anthropology and English.

Allison is moving to Canada, where she hopes to study cultural reporting as part of a graduate journalism program.

"Anthropology in particular stoked my desire to build bridges between communities and to cross social barriers."