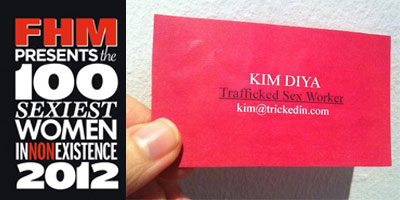 Called BBH Barn, it appealed for six students to create a project that would achieve 'something exciting famously'.

A campaign was developed by the new interns to help publicise the work of a local Singaporean NGO, HOME (Humanitarian Organisation for Migration Economics).

The BBH campaign, called TrickedIn, involved setting up a LinkedIn profile of a fake trafficking victim called Kim, who was supposedly looking for a new job.

There was a problem. LinkedIn does not allow fake profiles and restricted 'Kim's' account. Despite appeals to Reid Hoffman (co-founder of LinkedIn), the account remained restricted and the interns went into action. They set up a petition to LinkedIn demanding that the profile was reinstated, and started writing to women's rights organisations for support.

And they decided to involve Safeworld.

Out of the blue, one of the interns at BBH Barn sent an email to Safeworld asking for our support in petitioning LinkedIn.

First we needed to know more about the campaign.

We looked at the website of HOME, a highly credible NGO working with victims of human trafficking.  Next we wanted to know about BBH and saw they were a high-profile advertising agency with branches throughout the world representing prestigious clients. Finally we wanted to know about the BBH Barn project.  And that's when we came across a small press announcement by BBH Asia Pacific that the BBH Barn intern programme was open for new applicants.

Above the BBH Barn announcement was another press release, entitled 'FHM Sexiest Women in NON-Existence'.

'Partnering with creative agency BBH Asia Pacific, FHM will announce the winner in a groundbreaking, special edition issue, which will feature all 100 girls scandalously re-imagined by top artists from the around the world.

"... the Sexiest Women in Non-Existence issue will give readers something to look forward to every year, and give sexy imaginary women everywhere the recognition they deserve." Said Douglas Hamilton, Deputy Creative Director, BBH Asia Pacific.

FHM is a men's magazine, notorious for the objectification of women.

Safeworld decided that a collaboration with BBH would not be appropriate, and replied to the BBH intern to this effect, with our reasoning.We recommended she passed our feedback onto BBH.

We have not received a response.

What do you think?

If you would like to express your views to BBH Asia Pacific...

Since we did not hear back from BBH, we asked our intern writer, Casey Dillon, to spell out why it is inappropriate to advocate on behalf of sex-trafficking victims, whilst promoting the objectification of women.

The Sexual Objectification of Women and Sex Trafficking

Defining exploitation can be tricky.

Its broad definition can apply to the misuse of natural resources, underprivileged communities, or even individuals.  To some, it may seem like an exaggeration to compare sex trafficking, and the objectification, and hyper-sexualization of women as both being exploitative practices.

Regardless of what people may think, both trafficking, and the objectification of women are significant, and harmful forms of exploitation.  However, they are not independent of one another.

While sex trafficking is not solely a women’s issue, the majority of victims are female – but why?

The Social Roles of Men and Women

In most societies today, women still face oppression.  Many women perceive that they have historically been - and still are - victims of both direct and subtle forms of male oppression.

Women are more susceptible to gender discrimination in all its forms – lower wages, lack of education, inability to participate in politics, and as a result of these, are often perceived as less valuable to their families or communities.  In patriarchal societies, men are raised to believe that they deserve more, that they can have whatever they want because it is their ‘birthright’.

Often, what men want – and are taught they deserve – is that women can be controlled entirely, including sexually.  Men obtain these ‘pleasures’ through popular media and pornography, frequently seeing hyper-sexualized women often with little or no clothing, or performing a sexual act.

The UK's last major study of sexual behaviour –   the 2000 National Survey of Sexual Attitudes and Lifestyles (Natsal) –  found that 15 percent of men had had "overlapping" relationships in the previous year, but only 9 percent of women had the same.

Men who pay for sex could also explain their higher rates of "overlapping relationships". The study found that about 4 percent of men had paid for sex in the past five years. If we assume there are fewer women selling sex than there are men paying for it, then prostitution could also explain some of the discrepancy.

That assumes, of course, that far fewer women pay for sex.

Compared to women, men are far more likely to to act on any sexual desire they have, like paying for sexual favours.

Why Women Have Been Trafficked into Prostitution

While some prostitutes may consider themselves to be sex workers and be in the business willingly, many are sold against their will, with some too young to give consent, and others faced with no other choice.  They and their families may have been threatened,  may be trying to pay off an impossible debt, or may have been tricked by loved ones.

These are victims of sex trafficking: forced to endure sexual, physical, emotional and mental abuse, day after day.

Sex trafficking is an extremely profitable business.  Victims cost virtually nothing and can be sold on, repeatedly. If something happens to them, they can be easily replaced.

Unlike consenting sex workers who are earning a living for themselves, sex trafficking victims do not earn any profit.  All of the money they are forced to earn goes to their pimps, or criminal gangs operating as human traffickers.

Some “Johns”, or customers, desire virgins, or have fetishes that generally cannot be satisfied willingly.  For these reasons, pimps and human traffickers have been, and will continue to traffic victims for the purpose of sexual exploitation, and most of these victims will be female, for that is the ‘product’ most sought after.

Non-profits and profit-seeking businesses alike are raising their voices about the horrors of sex trafficking.  By bringing any aspect of human trafficking to light, the world comes one step closer to eliminating the problem.  However, all of the awareness campaigns in the world cannot end sex trafficking until a change in mindset occurs.

The continued focus on female sexuality throughout the world is a major cause of trafficking, if only for the fact that it reinforces the idea that women are objects of sexual pleasure that can be accessed, or purchased at any time though popular media, movies, pornography, or in person. 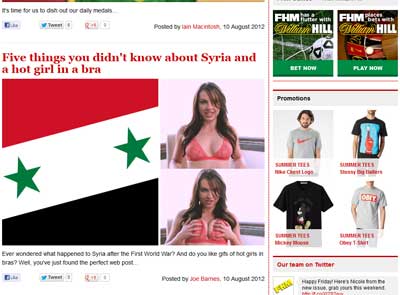 FHM caters to its audience by featuring sections of scantily clad “girls.”

By calling them “girls,” FHM suggests naïveté and innocence, and by displaying these women in little clothing – which is supposed to be attractive to the male audience, FHM has successfully dehumanized women, making them solely objects of pleasure.

It also reinforces the culturally shaped notion that men are entitled to see women in this way.

The Female Body as a Commodity

Sex trafficking responds to a demand for a certain commodity, and in this case, the female body.

Purchasing a trafficked victim for sexual purposes is similar to purchasing stolen or knock-off purses. They are cheaper, but accomplish the same tasks, and they can be more easily replaced.  However, people only realize how much they desire certain products when they are advertised.

BBH is advertising the female body in a way that presents it as a commodity; it makes desire for the purchase of sex seem normal or acceptable, especially if those purchasing sex are not getting what they desire for free.

While the “TrickedIn” campaign certainly has the best interests of sex trafficking victims at heart, BBH should have taken a closer look at what trafficking entails, and what some of the causal factors are.

There are some 800,000 migrant workers or more in Singapore and HOME has provided direct assistance to more than 50,000 men and women migrants and victims of human trafficking and forced labour, who availed of our programme and services. Among those helped included migrants affected by the Tsunami disaster in 2005 and the present global economic crisis in 2008/2009. On one occasion, we provided shelter for 15 Indonesian women and their children, who were abandoned at sea by seamen. Our stories of assistance are as varied as the sufferings and the wounds inflicted upon our beneficiaries.

You can support the work of HOME directly here.

Casey Dillon is a Safeworld Student Writer. She is studying at Connecticut College, USA, and is president of an anti-slavery group based at the college campus.

"I grew up believing that the American dream was possible; that if I worked hard enough, the sky could not even limit me, and that this was also true for everyone else...

While studying.. I realized the extent to which our society treats certain groups of people differently and unfairly...

I believe that each of us has a personal responsibility to become knowledgeable about, or at least aware of, the various issues that affect our fellow human beings, and that we also have the responsibility to share that knowledge."