Day of the Girl - A Wake-up Call 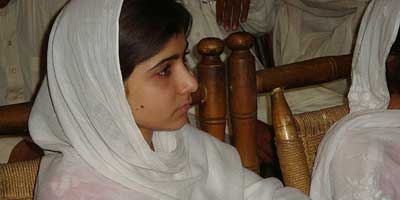 A Landmark for Girls’ Rights?

This year, 11th October marks the first ever International Day of the Girl.

It is the first day of its kind, designed to acknowledge the importance of endorsing girls’ rights across the planet, whilst at the same time highlighting some of the horrific situations girls in developing countries find themselves in.

The United Nations designated this day to raise awareness of these situations after a two year campaign initiated by Plan International.

Malala Yousafzai - shot by militants, on the way home from school, for speaking out about girls' education.Unfortunately, in many developing countries girls and young women are ostracised and even victimised if they are seen to be working for improving the status of females in their country.

Many brave young women and girls work at a grassroots level, raising awareness in their community.

Startlingly, on the 9th October 2012, Malala, another girl, and their teacher, were shot on their way home from school, by an, as of yet, unidentified gunman.  The Taliban claimed responsibility and, despite surviving this incredulous attack on an innocent young girl, Malala will be targeted again, according to a statement from the Taliban.

Jibran Khan was an eyewitness at the hospital where Malala was treated.  He told me that he had learned from a friend, who is a doctor at the hospital, that the bullet had been safely removed from Malala’s skull, but that she was being kept unconscious for two days to allow for recovery.  To think of a girl of just 14 years old suffering this at the hands of grown men is unthinkable.

In an interview with BBC World Service in January 2012, Malala had said, courageously: "If I lost my life in speaking up for the rights of girls, it was not a big deal for me..."

The bullet has now been removed, but the extent of the damage to Malala's brain is not yet known, and she is still in a coma. The world's attention is upon her, and especially the attention and compassion of the Pakistani community:

"I would love to mention here that our country, which is politically and somewhat ethnically divided, became united without any division under the banner of good will for Malala's recovery and condemning the terrorists who did it. This unity to me is unprecedented; and just brought by a little girl, loved and respected by all…a divided country united, reason: a small girl",  said Jibran.

Farida Afridi, shot and killed by militants, on her way to the office, for working for equality and peace.Violence aimed at girls and women who have incredible strength of character and courage is a very real threat in developing countries.  Not only does this place female campaigners in an extremely vulnerable position, but the use of intimidation aims to deter any further potential brave young women from speaking out against inequalities in their community.

Another tragic victim of this horrendous violence was Farida Afridi, co-founder of SAWERA - a grassroots NGO working in the neighbouring districts around Swat, and a Field Partner of Safe World for Women.

Farida and co-founder Noorzia, both in their twenties, worked to organise safe environments for women and girls to meet and support each other, as well as learning practical skills.  Farida was shot by a militant on the 4th July this year, and tragically she died from her injuries.  The message being broadcast by the Taliban and other groups averse to the progression of women’s rights is clear: try to educate and enrich women’s lives where you live, and you risk your life.  This is something that can only be stopped through international support and encouragement; terrified individuals can do nothing in their community without fear of assassination unless the global community supports them.  The Taliban and its exponents seek to scare communities into silence and inaction; PLAN and the UN seek to reverse this through acknowledgement and celebration of the achievements of women in developing countries.

There is a dire need for recognition from the wider international community of the horrors some girls are facing today, key amongst which are domestic violence, underage marriage and extreme poverty.  Girls who are no more than children are sent away from their homes and families into forced marriages.  The shocking statistic that, in the developing world, 80% of adolescent girls having unprotected sex are married demonstrates just how widespread this problem is.

Day of the Girl

Sponsored by the Canadian government, the International Day of the Girl aims at celebrating the joy and freedom that should be enjoyed by every girl.  The emphasis on this day is to demonstrate how education is the means through which girls currently in appalling situations can find strength and empowerment.  The basic human right to education, often available to boys in countries where it is denied to girls, should be universal to every child on the planet, regardless of gender.  It is Plan’s belief, as well as everyone who has supported this important campaign, that through education, girls can grow into strong, independent women, who can in turn feed their skills back into their communities.

Plan International was founded in 1937 and seeks to work against gender inequality by improving the situation of female children.  Their belief is that if girls’ rights are acknowledged, then following generations of women will be emancipated, thus breaking the cycle of gender discrimination.  The reality in many developing countries means that many schools are places of hostility and prejudice for girls, who are not welcomed.  This, coupled with the high price of education, results in the majority of girls leaving education before the secondary stage.  This group demonstrated how, globally, one in three girls is denied secondary education, and the affect this has not just on the individuals concerned, but on their entire community.  The desire to address this situation is a priority for Plan.

The turning point in the campaign came earlier this year, when the issue was discussed at the U.N.’s Commission on the Status of Women (CSW), where several arguments were brought forward in favour of a day dedicated to girls.  Additionally to practical implications, such as the improvement of education for girls, the 11th of October is hoped to have an effect on the morale of girls worldwide, making them feel acknowledged and respected.

According to Plan UK, 10 million girls a year marry underage.  That’s the equivalent of one girl every three seconds.  Currently, one out of seven girls will marry before the age of 15. The discouragement of girls from secondary education means a worrying number of young girls are marrying, working, and having children too young.  Countries with the highest rate of underage girls marrying tend to be poorer countries across Asia and Africa.  Interestingly, the legal age for boys to marry is nearly always several years higher than it is for girls in these countries.  Young girls marrying before they are physically or emotionally ready to do so can have a huge impact on their future relationships, as well as reproductive health.  Becoming pregnant as young as 13 can cause a number of complications during pregnancy, labour and after childbirth.  As well as definitively robbing these young girls of their childhood, becoming pregnant before the age of 20 doubles a girl’s chance of dying during childbirth.  Where education fails to provide opportunities for girls, early marriage can appear to be the only alternative.  At the same time, parents and teachers may be less willing to invest financial and learning resources in girls if they are expected to marry before long.  Plan hope to intervene in the middle of this circle, to make education for girls seem like a more appealing investment in the future of these communities.

Girls as young as 15 are unlikely to be given much attention in societies that don’t value the contribution of women to society.

As we have seen, in cases such as Farida’s and Malala’s, women and girls who do speak about their underprivileged situation literally risk their lives in doing so.  The result is that change is unlikely, unless initiatives such as the International Day of the Girl are supported and continued.

The education-focused charity Camfed believes that even through mere awareness, the lives of child-brides and mothers can be improved. Ultimately, child marriage, female discrimination and a restriction of educational and other such opportunities for girls are symptoms of the problems of poverty and lack of resources in developing countries.  Through raising awareness of the plight of the girls of these countries, for example through the media and the International Day of the Girl this October, the international community can gain a deeper perspective of why the question of poverty must be tackled with unfailing dedication.

The 11th of October is also an opportunity for us to celebrate the achievements of various organisations in this field.  The work of groups such as Plan, Camfed, and others, have already made a difference in the lives of some girls in developing countries: creating incentives for families to keep girls unmarried and in education for longer.

Through working on tireless campaigns to raise awareness and researching how to provide the education and resources to prevent future generations of uneducated child brides, these charities have paved the way for further improvements of girls’ rights.